Coldingham Priory was a house of Benedictine monks. It lies on the south-east coast of Scotland, in the village of Coldingham, Berwickshire. Coldingham Priory was founded in the reign of David I of Scotland, although his older brother and predecessor King Edgar of Scotland had granted the land of Coldingham to the Church of Durham in 1098, and a church was constructed by him and presented in 1100. The first prior of Coldingham is on record by the year 1147, although it is likely that the foundation was much earlier. The earlier Columban Abbey was founded by St. Æbbe sometime circa 640 AD. Although the monastery was largely destroyed by Oliver Cromwell in 1648, there are still extant remains of the priory, the choir of which forms the present parish church of Coldingham and is serviced by the Church of Scotland.

Æbbe was born c. 615 AD into both royal houses of Northumbria, the daughter of King Æthelfrith of Bernicia, (the first king of Northumbria from c.604) and Acha, a daughter of Ælla of Deira. In 616, she and her family were forced to flee with her family to Dál Riata following the death of her father at the Battle of the River Idle which was fought against Rædwald of East Anglia. The defeat led to the succession of Æbbe's uncle, Edwin of Northumbria.

At the court of Eochaid Buide she and her brothers converted to Christianity. King Eochaid's father, Áedán mac Gabráin had been a contemporary of St. Columba, and his grandfather, Conall mac Comgaill, had given the saint leave to build his mission on Iona. (It is interesting to note that Eochaid's father, Áedán had been comprehensively defeated by the forces of Æthelfrith at the Battle of Degsastan in 603AD.)

Following the defeat of Edwin at the Battle of Hatfield Chase in 633 against Penda of Mercia and Cadwallon ap Cadfan, and the subsequent despoliation of Northumbria, Æbbe's brother Oswald gained control of the kingdom by 635 AD, enabling the return of his family. 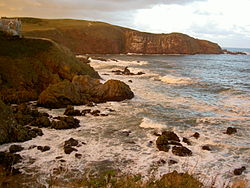 In c.635 King Oswald introduced Columban monks to the island of Lindisfarne, opposite his fortress of Bebbanburg, in order to Christianise his mainly pagan peoples. Under these auspices, Æbbe first founded a monastery at Ebchester, then at what Bede refers to as Urbs Coludi (Sax. Coldingaham). It is uncertain when these establishments were founded although Æbbe first appears in records of the Lindisfarne by 642 AD, the date of her brother's death. Oswald was succeeded by a younger brother, Oswiu. Both brothers were given the title of Bretwalda by Bede. The abbey was sited on what is now called Kirk-Hill, but is commonly called the Brugh (a corruption of Sax. burh- fort), on the headland at present day St. Abbs, separated from the world by a deep trench and a high palisade. This religious house lasted for about 40 years and was a double monastery of both monks and nuns governed by Æbbe. Saint Cuthbert arrived at Coldingham in 661 to instruct the community, and performed acts of miraculous mortification to combat lust that eventually led to his canonisation. In 671 St. Æthelthryth, to escape the lustful advances of her husband (Æbbe's nephew), Ecgfrith of Northumbria took the veil as a nun, under the tutelage of St Wilfrid. Æthelthryth was later to found Ely Cathedral.

The community at Coldingham were not renowned for their moral propriety, and Æbbe presumably had difficulties maintaining discipline. Whilst visiting Northumbria the Abbot of Iona, St Adomnán prophesied the house's destruction. The abbey at Coldingham burnt down circa 683 AD soon after Æbbe's death and was deserted by the time of Bede's writings in the early eighth century. Whatever Æbbe's failures in her rule, she herself is remembered as a religieuse of great piety who helped to spread Christianity in Northumbria and beyond. Her feast day is on 25th August.

All that remains today at the Kirk-hill is the trench, a few grassy mounds and the ruin of a 14th century church erected by monks of the later priory.

There are few references to the house at Coldingham from its destruction until its revival in the 11th c., excepting tales of a later superior also called Æbbe. It is likely that the house was reformed as community of nuns at some point in the eighth or ninth centuries, as by the formation of the Benedictine priory in 1100 AD there was a thriving cult of St. Æbbe at the site. The house appears to have moved from its original site at St. Abb's Head to its present location around this time

St. Æbbe the Younger is a semi-mythological abbess of Coldingham. In 870 AD a raiding party of Danes landed at the coast near the house and sacked it. Legend has it that faced with the dishonour that St Æbbe and her sisters expected, they mutilated themselves by cutting off their noses and lips. The nuns made themselves as unappealing as possible to the marauders, thereby foregoing rape and accepting martyr's deaths. The story is somewhat unreliable as there are no near contemporary accounts, and it is first recorded by Mathew Paris some 250 years later.

Founding of the Priory Church

In 1097, Étgar mac Maíl Choluim had gained control of Scotland from his uncle Domnall Bán. The son of Máel Coluim mac Donnchada, he attacked and deposed King Domnall with the backing of William Rufus of England. According to a charter of 1095, he was given the "land of Lothian" by the English king before securing possession of Scotland-proper. Following his takeover of Lothian and Scotland, in 1098 he confirmed possession of the lands of Coldingham by the monks of Durham, and attended the consecration of the new church to St. Mary in 1100. In the following years the brethren of Coldingham were to gain many charters of land, so that within fifty years they were able to assume the dignity of a Priory.

The Priory became the caput for the Barony of Coldingham, the Prior being the feudal lord. On January 2, 1392 Sir Robert de Lawedre of The Bass was a witness to a Royal Charter to the Priory of Coldingham confirming them in all of their ancient possessions, and signed at Linlithgow.[1]

Reformation and the end of Monasticism

Following the century of the Reformation the barony of Coldingham, previously the possession of the Priory, was erected as a temporal lordship, under the Great Seal, dated October 16, 1621, upon John Stewart, second son of Francis Stewart, 1st Earl of Bothwell, who was the last Commendator of Coldingham Priory. He personally received from the Crown a charter dated October 19, 1621, of the lands and baronies belonging to the Priory, united into one barony. Feu charters in the hands of many of the small proprietors in the neighbourhood were originally granted by him, either as Commendator or Lord. John Stewart disponed these lands and the barony on June 16, 1622 to Francis Stewart, eldest son of the Earl.

Negotiations subsequently took place between the Earl of Home and the Stewarts for the Earl's acquisition of the Barony and its possessions. These apparently failed through the Earl's inability to provide the purchase price.[2]

It is an interesting reflection on feudal superiors to note that in a petition to King Charles I dated April 4, 1636 the feuars and tenants still refer to themselves as "the vassals of the Abbacy of Coldingham". In this petition the vassals plead the oppression of the Stewarts and ask for the King to become the only superior Lord of Coldingham.[3]

In Cromwell's time the Homes of Renton seem to have taken the barony of Coldingham from the Stewarts in lieu of debt, as Harry Home, natural son of John Home of Renton apprised the barony and its lands on November 26, 1656 from Robert Stewart, lawful son of the now deceased Francis Stewart. Harry Home subsequently assigned his right to Alexander Home, eldest lawful son of said John Home of Renton, the Precept by Oliver Cromwell being dated at Edinburgh, August 10, 1658[4]

In 1857 there were about 70 'heritors' or feuholders in the barony.[5] Today, of course, there are may more, all converted into freeholders with the abolition of feudal land tenure by the Scottish Parliament in November 2005.

Today the ruins are in a very poor state, badly eroded, overgrown and at risk of collapse. With the help of the Heritage Lottery Fund the site will be rejuvenated: the ruins conserved, footpaths reinstated and a wasteland transformed into a community garden with a monastic theme, concentrating on plants with culinary, medicinal, and aromatic properties. There will be interpretation for the first time, explaining the hundreds of years of history contained within its walls, while a year-long education programme will engage schools and community groups in many diverse activities relating to the Priory and its conservation.