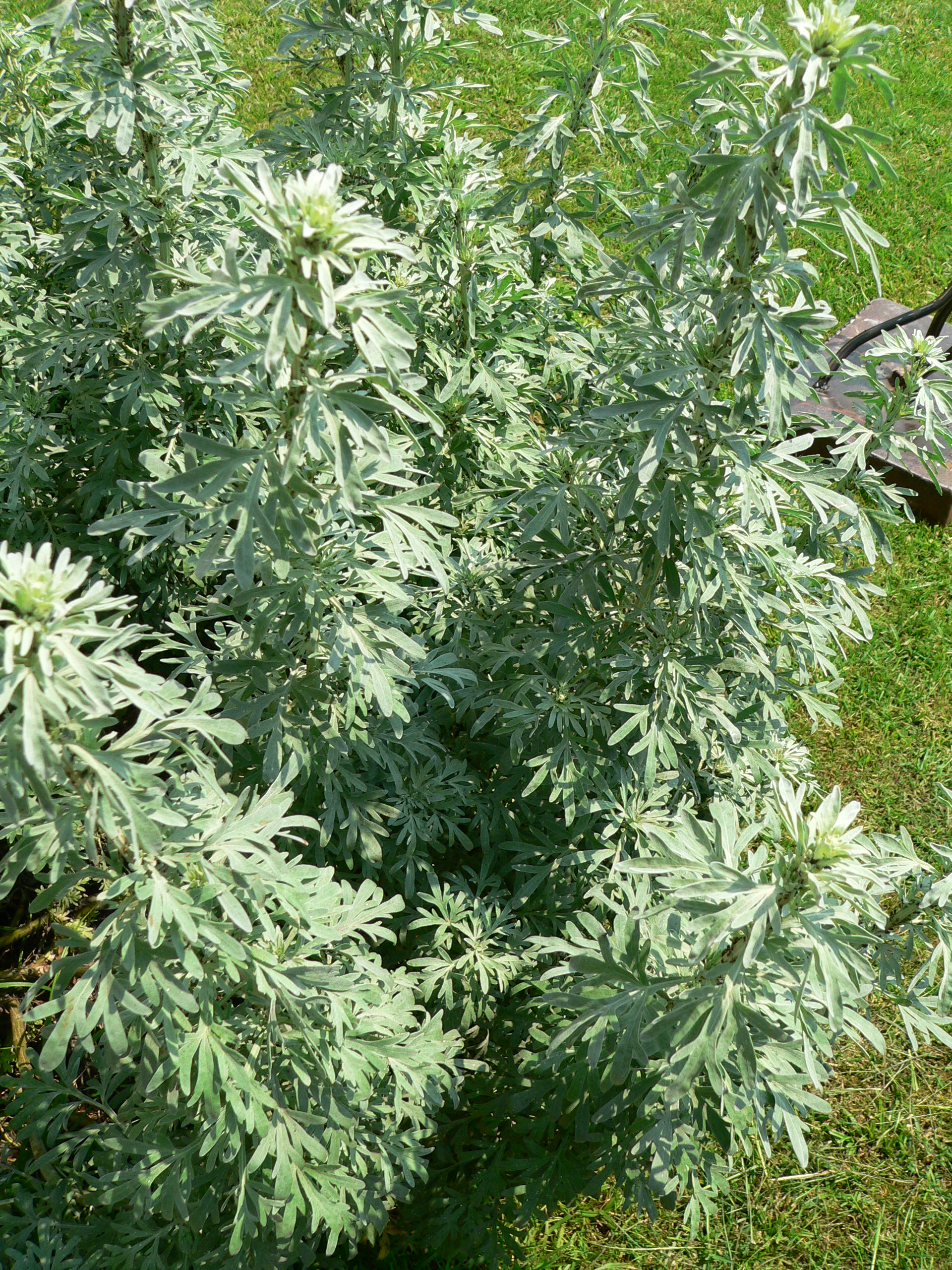 "Artemisia absinthium" (absinthium, absinthe wormwood, wormwood or grand wormwood) is a species of wormwood, native to temperate regions of , and northern .

It is a , with a hard, woody . The stems are straight, growing to 0.8-1.2 m (rarely 1.5 m) tall, grooved, branched, and silvery-green. The leaves are spirally arranged, greenish-grey above and white below, covered with silky silvery-white hairs, and bearing minute oil-producing glands; the basal leaves are up to 25 cm long, bipinnate to tripinnate with long petioles, with the cauline leaves (those on the stem) smaller, 5-10 cm long, less divided, and with short petioles; the uppermost leaves can be both simple and sessile (without a petiole). Its s are pale yellow, tubular, and clustered in spherical bent-down heads (capitula), which are in turn clustered in leafy and branched s. Flowering is from early summer to early autumn; pollination is anemophilous. The is a small ; seed dispersal is by gravity.

It grows naturally on uncultivated, arid ground, on rocky slopes, and at the edge of footpaths and fields.

The plant can easily be cultivated in dry . They should be planted under bright exposure in fertile, mid-weight soil. It prefers soil rich in . It can be propagated by growth (ripened cuttings taken in March or October in temperate climates) or by seeds in nursery beds. It is naturalised in some areas away from its native range, including much of .

The plant's characteristic odour can make it useful for making a plant spray against pests. In the practice of , because of the secretions of its roots, it exerts an inhibiting effect on the growth of surrounding plants, thus weeds. It can be useful to repel insect e but it need only be planted on the edge of the area of cultivation. It has also been used to repel s and s indoors.

It is an ingredient in the liquor , and also used for flavouring in some other spirits and wines, including , and . It is also used medically as a , , , , , , and . In the Middle Ages it was used to spice . [ [http://www.botanical.com/botanical/mgmh/w/wormwo37.html Common wormwood] ]

The leaves and flowering tops are gathered when the plant is in full bloom, and dried naturally or with artificial heat. Its active substances include silica, two bitter elements (absinthine and anabsinthine), , tannic and ous substances, , and . Its use has been claimed to remedy indigestion and , it acts as an , and as a . For medicinal use, the herb is used to make a tea for helping pregnant women during pain of labor. A dried encapsulated form of the plant is used as an . A wine can also be made by macerating the herb. It is also available in powder form and as a . The oil of the plant can be used as a cardiac stimulant to improve blood circulation. Pure wormwood oil is very poisonous, but with proper dosage poses little or no danger. Wormwood is mostly a stomach medicine. [Lust, John, N.D. "The Herb Book", Bantam Books. 1979. ISBN 0879040556.]

"Artemisia" comes from from ἀρτεμισία, from Ἄρτεμις, meaning (the goddess). [http://en.wiktionary.org/wiki/absinthium] In culture, Artemis was a goddess of the hunt, and protector of the forest and children.

"Absinthium" comes from Ancient Greek ἀψίνθιον (apsinthion) [http://en.wiktionary.org/wiki/absinthium] , possibly meaning "unenjoyable", and probably referring to the bitter nature of the derived beverage [http://www.uni-graz.at/~katzer/engl/Arte_vul.html] , though this is likely folk etymology.

The word "wormwood" comes from "wormwode" or "wermode". The form "wormwood" is influenced by the traditional use as a cure for intestinal worms. Webster's Third New International Dictionary attributes the etymology to "wermōd" (compare with German "Wermut" and the derived drink ""). An alternate explanation dubiously combines the Old English "wer", meaning "man" (as in "werewolf"), with OE "mōd", meaning "mood".