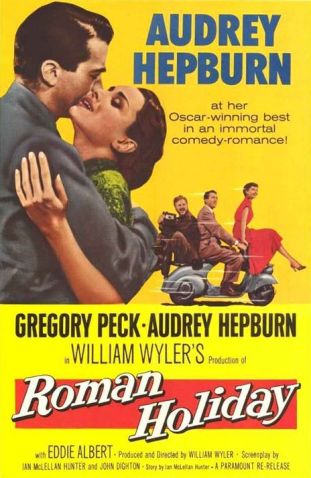 "Roman Holiday" is a 1953 . The film introduced American audiences to Belgian-born actress , who won the Academy Award for Best Actress. and co-starred. The movie was directed and produced by . It was written by and author . As Trumbo was on the , he was not credited; instead, fronted for him. Trumbo's name was finally digitally added to the film's credits when it was released on in .

In the 1970s, both Peck and Hepburn were approached with the idea of a sequel, but the project never came to fruition. The film was remade for television in with and , who herself came from a European royal family.

Princess Ann (Hepburn) is a royal princess of an unspecified country. She is on a widely publicized tour of several European capitals, including Rome. One night, she rebels against the strenuous demands of her official duties, where every minute of her time is scheduled. Her doctor gives her a sedative in order to help her sleep, but she secretly leaves her country's embassy and goes out alone to experience Rome.

The injection eventually takes effect and she falls asleep on a public bench where Joe Bradley (Peck), an expatriate American reporter, meets her, but does not recognize her. He offers her money so that she can take a taxi home, but "Anya Smith," as she calls herself, refuses to disclose where that is, saying that she should be taken to the . Joe finally decides, for safety's sake, to let her spend the night in his apartment. He is amused by her regal manner, but less so when she appropriates his bed, leaving him the uncomfortable couch. The next morning, unable to rouse her, he goes to work.

His editor, Mr. Hennessy (Hartley Power), asks him if he had covered the press conference with the princess. Joe lies, making up details of the alleged interview until Hennessy tells him that the princess had suddenly "fallen ill" and the conference had been canceled. Joe sees a picture of her and recognizes the young woman he had left sleeping in his apartment. Hennessy then threatens to fire him, and the two men end up making a bet that Joe can get an exclusive on the princess.

Joe realizes he is sitting on a windfall; an exclusive story about his unsuspecting guest. He hatches a plan to offer to show Rome to Anya, but not before getting his photographer friend, Irving Radovich (), to tag along to take pictures of her without her knowledge.

Meanwhile, on a whim, Anya gets her hair cut short in a barbershop facing the famous , before running into Joe, a meeting he has set up to look coincidental. They spend the day seeing the sights, including the "," a marble image said to bite off the hands of liars. She shares with Joe her dream of living a normal life without her crushing responsibilities and restrictions. That night, at a dance on a boat, government agents finally track her down and try to escort her away, but a wild melee breaks out and Joe and Anya escape. Through all this, they gradually fall in love, but Anya realizes that their relationship cannot continue. She finally bids farewell to Joe, without revealing her true identity, and returns to the embassy.

During the course of the day, Hennessy learns that the princess is missing, not ill as the embassy had claimed. He suspects that Joe knows where she is, and tries to get him to admit it, but Joe claims to know nothing about it. Knowing Joe's feelings for Anya, Irving reluctantly decides not to sell his photos.

The next day, Princess Ann appears at the delayed news conference, only to find Joe and Irving among the members of the press. Irving takes her picture with the same miniature cigarette lighter/camera he had used the previous day. He then presents her with the photographs he had taken that day, as a memento of her adventure. Joe lets her know, by allusion, that her secret is safe with them. She, in turn, works into her bland press conference statements a coded message of love and gratitude to Joe. She then departs, leaving Joe to linger for a while, contemplating what might have been.

In 2002, AFI named "Roman Holiday" the fourth best love story of all time on its list.

One of the most famous scenes in the movie is when Peck puts his hand into the "Mouth of Truth" (), a stone face in Rome that legend says will bite your hand off if you tell a lie. In the film, when he pulls his hand out it is missing, causing Anya/Hepburn to scream. He then pops his hand out of his sleeve and laughs. Hepburn's shriek was not acting &mdash; Peck decided to pull a gag he had once seen do, and did not tell his co-star beforehand. ["An Evening with Gregory Peck", a series of retrospective lectures Peck gave in the years before his death, and "Remembering Roman Holiday", a featurette on the 2002 DVD release.]

Shortly after Princess Ann and Joe Bradley meet, she quotes him some poetry and insists it is by Keats. He insists it is by Shelley, and they have a bit of an argument. The quote is in fact from the poem "" by , published posthumously by his wife and used in her drama "Proserpine and Midas".

Tributes and references in popular culture

The film inspired the lyrics of 's "Breakfast at Tiffany's", but the author, Todd David Pipes, thought that one of Hepburn's other films would make a better song title. [British Hit Singles & Albums (Edition 18), Guinness World Records Limited]

The "Mouth of Truth" scene was shown in the 2006 film "", with Dupree stating that the trick always gets him even though he knows it's coming. The joke is also used in the film "" and the 2007 film "".

In the and "REC", Fumihiko Matsumaru and Aka Ondo went to see the movie in the first episode.

In the popular television show "Gossip Girl", the Christmas episode is titled "Roman Holiday". And in the second season premiere, it is said that "Roman Holiday" is 's second favorite film.