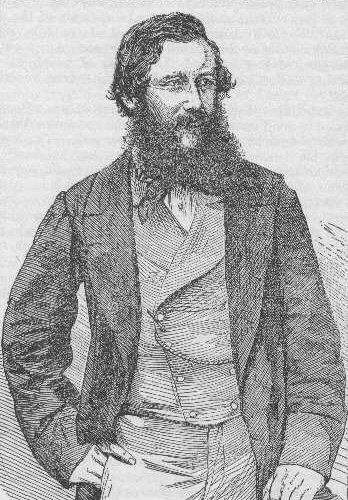 John Hannington Speke ( &ndash; ) was an officer in the British Indian army, who made three voyages of exploration to and who is most associated with the search for the source of the Nile. He is most commonly referred to as John Hanning Speke.

In 1844 the British Indian Army served in the Sikh War under Sir Colin Campbell. He spent his leave exploring the and once crossed into .

In 1854 he made his first voyage, joining the already famous on an expedition to . The expedition did not go well. The party was attacked and Burton and Speke were both severely wounded. Speke was captured and stabbed several times with spears before he was able to free himself and escape. Burton escaped with a javelin impaling both cheeks. Speke returned to England to recover and then served in the .

In 1856, Speke and Burton made a voyage to to find the great lakes which were rumoured to exist in the center of the continent. Both men clearly hoped that their expedition would locate the source of the . The journey was extremely strenuous and both men fell ill from a variety of tropical diseases. Speke suffered severely when he became temporarily deaf after a beetle crawled into his ear and he had to remove it with a knife. He also later went temporarily blind. After an arduous journey the two became the first Europeans to discover (although Speke was still blind at this point and could not properly see the lake). They heard of a second lake in the area, but Burton was too sick to make the voyage. Speke thus went alone, and found the lake, which he christened . It was this lake which eventually proved to be the source of the river Nile. However, much of the expedition's survey equipment had been lost at this point and thus vital questions about the height and extent of the lake could not be answered.

Speke returned to England before Burton, on 8 May 1859 and made their voyage famous in a speech to the where he claimed to have discovered the source of the Nile. When Burton returned on 21 May, he was angered by Speke's precipitous announcements believing that they violated an agreement that the two men would speak to the society together. A further rift was caused when Speke was chosen to lead a subsequent expedition without Burton. [cite book
last = Stephen
first = Leslie
title = Dictionary of National Biography
publisher = Smith, Elder
year = 1898
location = London
pages = 325
url = http://books.google.com/books?id=migJAAAAIAAJ ] The two presented joint papers concerning the expedition to the on 13 June 1859. [cite journal
last = Burton
first = R. F.
authorlink =
coauthors = J. H. Speke
title = Explorations in Eastern Africa
journal = Proceedings of the Royal Geographical Society of London
volume = 3
issue = 6
pages = 348–358
date = 13 June 1859
doi = 10.2307/1799169]

Together with , Speke left from Zanzibar in October 1860. When they reached Grant travelled north and Speke continued his journey towards the West. Speke reached Lake Victoria on July 28 1862 and then travelled on the west side around Lake Victoria without actually seeing much of it, but on the north side of the lake, Speke found the Nile flowing out of it and discovered the . Speke then sailed down the Nile and he was reunited with Grant. Next he travelled to in southern , where he met and his wife, continuing to , from which he sent a celebrated telegram to London: "The Nile is settled." [cite journal
title = Twelfth Meeting, Monday Evening, May 11th, 1863
journal = Proceedings of the Royal Geographical Society of London
volume = 7
issue = 3
pages = 108–110
url = http://books.google.com/books?id=3XwMAAAAIAAJ&pg=PA109&dq=telegram+speke]

Speke's voyage did not resolve the issue, however. Burton claimed that because Speke had not followed the Nile from the place it flowed out of Lake Victoria to Gondokoro, he could not be sure they were the same river. [cite journal
last = Burton
first = R. F.
title = Lake Tanganyika, Ptolemy's Western Lake-Reservoir of the Nile
journal = Proceedings of the Royal Geographical Society of London
volume = 9
issue = 1
pages = 6–14
date = 14 November 1864
doi = 10.2307/1799295 ] A debate was planned between the two before the geographical section of the British Association in Bath on , but Speke died that morning from a self-inflicted gun-shot wound while hunting at in Wiltshire. [Roy Bridges, " [http://www.oxforddnb.com/view/article/26101 Speke, John Hanning (1827–1864)] " (subscription or library card required), Oxford Dictionary of National Biography, Oxford University Press, Sept 2004; online edn, May 2006. Accessed 15 Aug 2008.] An inquest concluded that the death was accidental, a conclusion supported by his only biographer, though the idea of suicide has appealed to some. Speke was buried in , Somerset, the ancestral home of the Speke family. [cite book
last = Stephen
first = Leslie
title = Dictionary of National Biography
publisher = Smith, Elder
year = 1898
location = London
pages = 327
url = http://books.google.com/books?id=migJAAAAIAAJ ]

The film "Mountains of the Moon" (1990) (starring Scottish actor as Speke) related the story of the Burton-Speke controversy. The film hints at a sexual intimacy between Burton and Speke. It also vaguely portrays Speke as a closeted homosexual. This was based on the William Harrison novel "Burton and Speke", which explicitly portrays Speke as homosexual and Burton as rampantly heterosexual. Both of these portrayals are marked by conflations of fact and artisic license and should be treated skeptically.

in the , was named in honour of John Speke, as an early European explorer of this region.

Biographies and books about Speke