All production methods for sparkling wines have one thing in common: they have the purpose of introducing enough carbon dioxide in the wine to make it effervescent. 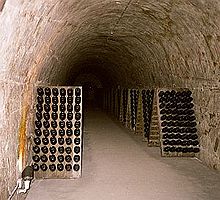 There are four main methods of sparkling wine production. The first is simple injection of carbon dioxide (CO2), the process used in soft drinks, but this produces big bubbles that dissipate quickly in the glass. The second is the Metodo Italiano – Charmat process, in which the wine undergoes a secondary fermentation in bulk tanks, and is bottled under pressure. This method is used for Prosecco and Asti in particular, and produces smaller, longer-lasting bubbles. This is now used widely around the world to produce light, delicate sparkling wines. The third method is the traditional method or méthode champenoise.[a] With this method the effervescence for more complex wines are produced by secondary fermentation in the bottle. As the name suggests, this is used for the production of Champagne and other quality sparkling wines, but is slightly more expensive than the Charmat process. The fourth method is the "transfer method". This method will take the cuvée to bottle for secondary fermentation, which allows for the additional complexity, but then will transfer the wine out of the individual bottles into a larger tank after it has spent the desired amount of time on yeast.[1]

The larger Champagne producers have a number of press houses situated throughout the region, such as this Moët & Chandon facility.

Grapes used for Champagne are generally picked earlier, when sugar levels are lower and acid levels higher. Except for pink or rosé Champagnes, the juice of harvested grapes is pressed off quickly, to keep the wine white. The first fermentation begins in the same way as any wine, converting the natural sugar in the grapes into alcohol while the resultant carbon dioxide is allowed to escape. This produces the base wine. This wine is not very pleasant by itself, being too acidic. At this point the blend, known as the cuvée, is assembled, using wines from various vineyards, and, in the case of non-vintage Champagne, various years.

A bottle of undisgorged Champagne resting on the lees. The yeast used in the second fermentation is still in the bottle, which is closed with a crown cap.

The traditional method is the process used in the Champagne region of France to produce the sparkling wine known as Champagne. It is also the method used in Spain to produce Cava. It used to be known as the méthode champenoise but the Champagne producers have successfully lobbied the European Union to restrict that term to wines from their region. Thus wines from elsewhere may not use méthode champenoise when sold in the EU, and instead traditional method, méthode traditionnelle or the local language equivalent can be seen. Consumers outside the EU may still see méthode champenoise on labels, but it is becoming less common.

After primary fermentation, blending (assemblage in Champagne) and bottling, a second alcoholic fermentation occurs in the bottle. This second fermentation is induced by adding several grams of yeast (usually Saccharomyces cerevisiae although each brand has its own secret recipe) and several grams of rock sugar. At this time the champagne bottle is capped with a crown cap. The bottle is then riddled (see below), so that the lees settles in the neck of the wine bottle. After the required aging, the neck is then frozen, and the cap removed. The pressure in the bottle forces out the lees, and the bottle is quickly corked with a genuine cork to maintain the carbon dioxide in solution.[1]

The blended wine is put in bottles along with yeast and a small amount of sugar, called the liqueur de tirage, and stored in a wine cellar horizontally, for a second fermentation. Champagne requires a minimum of 1.5 years, under the Appellation d'origine contrôlée, to develop completely. In years where the harvest is exceptional, a vintage (millesimé) is declared and the wine must mature for at least 3 years.

During the secondary fermentation, the carbon dioxide is trapped in the wine, in solution. The amount of added sugar determines the pressure of the bottle. To reach the standard value of 6 bars (600 kPa) inside the bottle, it is necessary to have 18 grams of sugar, and the amount of yeast, Saccharomyces cerevisiae, is regulated by the European Commission (Regulation 1622/2000, 24 July 2000) to be 0.3 gram per bottle. The liqueur de tirage is then a mixture of sugar, yeast and still Champagne wine. 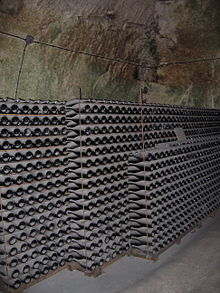 Bottles of Champagne aging in the cellars of Veuve Clicquot.

Non-vintage wine from Champagne cannot legally be sold until it has aged on the lees in the bottle for at least 15 months. Champagne's AOC regulations further require that vintage Champagnes be aged in cellars for three years or more before disgorgement, but most top producers exceed the requirement, holding bottles on the lees for 6 to 8 years.

Le Remueur: 1889 engraving of a man engaged in the laborious daily task of turning each bottle a fraction 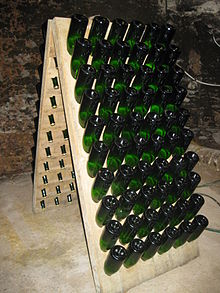 After aging, the lees must be consolidated for removal. The bottles undergo a process known as riddling (remuage in French).[2] In this stage, the bottles are placed on special racks called pupitres that hold them at a 45° angle, with the crown cap pointed down. Once a day (every two days for Champagne), the bottles are given a slight shake and turn, alternatively on right then left, and dropped back into the pupitres, with the angle gradually increased. The drop back into the rack causes a slight tap, pushing sediments toward the neck of the bottle. In 10 to 14 days (8 to 10 weeks for Champagne), the position of the bottle is straight down, with the lees settled in the neck. (This time can be shortened by moving the bottle more than once a day.[3]) Manual riddling is still done for Prestige Cuvées in Champagne, but has otherwise been largely abandoned because of the high labour costs. Mechanised riddling equipment (a gyropalette) is used instead.

The lees removal process is called disgorging (dégorgement in French), a skilled manual process where the crown cap and lees are removed without losing much of the liquid, and a varying amount of sugar added. Before the invention of this process by Madame Clicquot in 1816, Champagne was cloudy; this style is seen occasionally today, under the label méthode ancestrale. Modern automated disgorgement is done by freezing a small amount of the liquid in the neck and removing this plug of ice containing the lees. 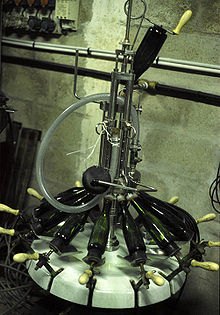 Equipment for effecting dosage through the addition of 'liqueur d'expédition.

Immediately after disgorging but before final corking, the liquid level is topped up with liqueur d'expédition, commonly a little sugar, a practice known as dosage. The liqueur d'expédition is a mixture of the base wine and sucrose, plus 0.02 to 0.03 grams of sulfur dioxide as a preservative. Some maisons de Champagne (Champagne brands) claim to have secret recipes for this, adding ingredients such as old Champagne wine and candi sugar. In the Traité théorie et pratique du travail des vins (1873), Maumené lists the additional ingredients "usually present in the liqueur d'expédition": port wine, cognac, elderberry wine, kirsch, framboise wine, alum solutions, tartaric acid, and tannins.

The amount of sugar in the liqueur d'expédition determines the sweetness of the Champagne, the sugar previously in the wine having been consumed in the second fermentation. Generally, sugar is added to balance the high acidity of the Champagne, rather than to produce a sweet taste. Brut Champagne will only have a little sugar added, and Champagne called nature or zéro dosage will have no sugar added at all. A cork is then inserted, with a capsule and wire cage securing it in place.

While the traditional, or "Champagne method", is the most widely known style of production, there are several ways to produce sparkling wine that are less costly in labor.[1]

The Charmat process is known as Metodo Charmat-Martinotti (or Metodo Italiano) in Italy, where it was invented and is most used. The wine undergoes secondary fermentation in stainless steel tanks or steel vessels covered with vitreous enamel rather than individual bottles, and is bottled under pressure in a continuous process. Many grape varieties, including Prosecco, are best suited for fermentation in tanks. Charmat method sparkling wines can be produced at a slightly lower cost than méthode champenoise wines.[1]

This follows the first steps of "methode champenoise" in that after primary fermentation the cuvée is transferred to bottle to complete secondary fermentation. When the secondary fermentation is complete and the wine has spent the desired amount of time in bottle on yeast lees (six months is the requirement to label a wine 'bottle fermented') then the individual bottles are transferred (hence the name) into a larger tank. The wine is then filtered, the liqueur de dosage added, and then filled back into new bottles for sale. This method allows for complexity to be built into the wine, but also gives scope for blending options after the wine has gone into bottle.[1]

Comparatively inexpensive sparkling wine is made by simple injection of CO2 from a carbonator. This way of manufacturing is not allowed in the European Union.[citation needed]

Even experts disagree about the effects of aging on Champagne after disgorgement. Some prefer the freshness and vitality of young, recently disgorged Champagne, and others prefer the baked apple and caramel flavors that develop from a year or more of bottle aging. In 2009, a 184-year-old bottle of Perrier-Jouët was opened and tasted, still drinkable, with notes of "truffles and caramel", according to the experts.[4]

The majority of the Champagne produced is non-vintage (also known as mixed vintage or multivintage), a blend of wines from several years. This means that no declared year will be displayed on the bottle label. Typically, however, the majority of the wine is from the current year but a percentage is made of reserve wine from previous years. This serves to smooth out some of the vintage variations caused by the marginal growing climate of Champagne, which is the most northerly winegrowing region in France. Most Champagne houses strive for a consistent house style from year to year (largely for reasons related to price-setting and successful marketing), and this is arguably one of the hardest tasks of the house winemaker.

The grapes to produce vintage Champagne must be 100% from the year indicated (some other wines in the EU need only be 85% to be called vintage, depending on their type and appellation). To maintain the quality of non-vintage Champagne a maximum of half the grapes harvested in one year can be used in the production of vintage Champagne ensuring at least 50%, though usually more, is reserved for non-vintage wines. Vintage Champagnes are the product of a single high-quality year, and bottles from prestigious makers can be rare and expensive.

Several wine faults can occur in sparkling wine production. Some that were present in early production methods include yeux de crapauds (toad's eyes) which was a condition of big, viscous bubbles that resulted from the wine spending too much time in wooden casks. Another fault could occur when the wine is exposed to bacteria or direct sunlight, leaving the wine with murky coloring and an oily texture.[5]

a.  ^ The term "méthode champenoise" or "Champagne method" was outlawed for all wines other than Champagne (which for obvious reasons does not bother to utilize it) in Europe in 1994, replaced with "traditional method". On labels it may be referred to as "méthode traditionnelle", "méthode classique", "traditional method", "classic method", or the ambiguous term "bottle fermented".[6]