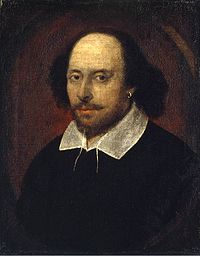 The "Chandos" portrait is one of the most famous of the portraits that may depict William Shakespeare (1564–1616). Believed to have been painted from life between 1600 and 1610, it may have served as the basis for the engraved portrait of Shakespeare used in the First Folio in 1623.[1] It is named after James Brydges, 3rd Duke of Chandos, an early owner. The portrait was given to the National Portrait Gallery, London on its foundation in 1856 and it is listed as number one in its collection, being its first acquisition.[2]

It has not been possible to determine with certainty who painted the portrait, nor whether it really depicts Shakespeare. However the National Portrait Gallery believes that it probably does depict the poet. 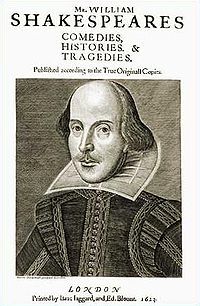 Engraved portrait of Shakespeare by Martin Droeshout, on the title page of the first publication of his works, the First Folio, shows distinct similarities when compared to the oil painting

It has been claimed that Shakespeare's friend Richard Burbage (1567–1619) painted the Chandos portrait,[3] but the first known reference to the painting is in a note by George Vertue, who states that it was painted by John Taylor, a respected member of the Painter-Stainers' company who may also have been the same John Taylor who acted with the Children of Paul's.[4] Vertue refers to Taylor as an actor and painter and as Shakespeare's "intimate friend". He also states that before the Duke of Chandos acquired it, the portrait was owned by Shakespeare's godson, William Davenant (1606–1668),[3][4] who, according to the gossip chronicler John Aubrey, claimed to be the playwright's illegitimate son.[5] He also states that it was left to Davenant in Taylor's will and that it was bought by Thomas Betterton from Davenant and then sold to the lawyer Robert Keck, a collector of Shakespeare memorabilia.[3][2]

After Keck's death in 1719 it passed to his daughter, and was inherited by John Nichol, who married into the Keck family. Nichol's daughter Margaret married the 3rd Duke of Chandos. The painting passed through descent within the Chandos title until Richard Temple-Grenville, 2nd Duke of Buckingham and Chandos sold it to the Earl of Ellesmere in 1848. Ellesmere donated it to the National Portrait Gallery.[6]

A contemporary image of the playwright is the engraving in the posthumously-published First Folio of 1623, which was created by Martin Droeshout and was probably commissioned by Shakespeare's friends and family. It is considered likely that the Droeshout engraving is a reasonably accurate likeness because of the use by these close associates and that contemporaries such as Ben Jonson praised it at the time of the publication.[7] Since the man in the Chandos portrait resembles the one in the Droeshout engraving, the similarity lends an indirect legitimacy to the oil painting. A further indication of legitimacy is the fact that the Chandos portrait was the inspiration for two posthumous portraits of Shakespeare, one by Gerard Soest and another, grander one, known as the "Chesterfield portrait" after a former owner of that painting.[2] These were probably painted in the 1660s or 1670s, within living memory of Shakespeare. The Chesterfield portrait is held by the Shakespeare Birthplace Trust in Stratford-upon-Avon.

In 2006, Tarnya Cooper of the National Portrait Gallery completed a three-and-a-half-year study of portraits purported to be of Shakespeare and concluded that the Chandos portrait was most likely a representation of Shakespeare. Cooper points to the earring and the loose shirt-ties of the sitter, which were emblematic of poets (the poet John Donne and Shakespeare's patron the Earl of Pembroke sported similar fashions). However, she readily acknowledges that the painting's authenticity cannot be proven.[2][8]

Cooper also notes that the painting has been badly damaged by over-cleaning and retouching. Parts are abraded and some parts have been slightly altered. The hair has been extended and the beard is longer and more pointed than when originally painted.

In addition to the Chesterfield portrait, a copy was made at least as early as 1689, by an unknown artist. Many 18th century images used it as a model for portrayals of Shakespeare.

The painting was engraved by Gerard Van der Gucht for Nicholas Rowe's 1709 edition of Shakespeare's works. Another print was made by Jacobus Houbraken in 1747.[2]

Because the images of Shakespeare are either doubtful in provenance or lacking expression, no one image seems to reconcile well with readers' imaginations. "Some Victorians recoiled at the idea that the Chandos portrait represented Shakespeare. One critic, J. Hain Friswell, insisted 'one cannot readily imagine our essentially English Shakespeare to have been a dark, heavy man, with a foreign expression'." [9] The Iraqi writer Safa Khulusi argued that its "un-English" look was evidence for his theory that Shakespeare was an Arab.[10]