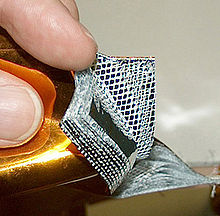 Closeup of Multi-layer insulation from a satellite. The metal coated plastic layers and the scrim separator are visible.

Multi-layer insulation, or MLI, is thermal insulation composed of multiple layers of thin sheets often used on spacecraft. It one of the main items of the spacecraft thermal design, mainly intended to reduce heat loss by thermal radiation. In its basic form, it does not appreciably insulate against other thermal losses such as heat conduction or convection. It is therefore commonly used on satellites and other applications in vacuum where conduction and convection are much less significant and radiation dominates. MLI gives many satellites and other space probes the appearance of being covered with gold foil. 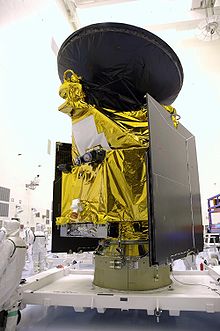 The golden areas are MLI blankets on the Mars Reconnaissance Orbiter

The principle behind MLI is radiation balance. To see why it works, start with a concrete example - imagine a square meter of a surface in outer space, at 300 K, with an emissivity of 1, facing away from the sun or other heat sources. From the Stefan-Boltzmann law, this surface will radiate 460 watts. Now imagine we place a thin (but opaque) layer 1 cm away from the plate, thermally insulated from it, and also with an emissivity of 1. This new layer will cool until it is radiating 230 watts from each side, at which point everything is in balance. The new layer receives 460 watts from the original plate. 230 watts is radiated back to the original plate, and 230 watts to space. The original surface still radiates 460 watts, but gets 230 back from the new layers, for a net loss of 230 watts. So overall, the radiation losses have been reduced by half by adding the additional layer.

MLI covering the heat shield of the Huygens probe

More layers can be added to reduce the loss further. The blanket can be further improved by making the outside surfaces highly reflective to thermal radiation, which reduces both absorption and emission. The performance of a layer stack can be quantified in terms of its overall heat transfer coefficient U, which defines the radiative heat flow rate Q between two parallel surfaces with a temperature difference ΔT and area A as

Theoretically, the heat transfer coefficient between two layers with emissivities

Wm-2K-4 is the Stefan-Boltzmann Constant. If each layer has the same emissivity

on both sides, then a stack of N layers placed between two high-emissivity surfaces will have an overall heat transfer coefficient

Clearly, increasing the number of layers and decreasing the emissivity both lower the heat transfer coefficient, which is equivalent to a higher insulation value. In this equation, it is assumed that the temperature difference is small compared to the absolute temperature. In space, where the apparent outside temperature could be 3 K (cosmic background radiation), the exact U value is different.

The layers of MLI can be arbitrarily close to each other, as long as they are not in thermal contact. The separation space only needs to be minute, which is the function of the extremely thin scrim or polyester 'bridal veil' as shown in the photo. To reduce weight and blanket thickness, the internal layers are made very thin, but they must be opaque to thermal radiation. Since they don't need much structural strength, these internal layers are usually made of very thin plastic, about 6 micrometres (1/4 mil) thick, such as Mylar or Kapton, coated on one side with a thin layer of metal on both sides, typically silver or aluminum.[1] For compactness, the layers are spaced as close as possible, though without touching, since there should be little or no thermal conduction between the layers. A typical insulation blanket has 40 or more layers.[1] The layers may be embossed or crinkled, so they only touch at a few points, or held apart by a thin cloth mesh, or scrim, which can be seen in the picture above. The outer layers must be stronger, and are often thicker and stronger plastic, re-enforced with a stronger scrim material such as fiberglass.

In satellite applications, the MLI will be full of air at launch time. As the rocket ascends, this air must be able to escape without damaging the blanket. This may require holes or perforations in the layers, even though this reduces their effectiveness.

MLI blankets are constructed with sewing technology. The layers are cut, stacked on top of each other, and sewn together at the edges. Seams and gaps in the insulation are responsible for most of the heat leakage through MLI blankets.[citation needed]

Spacecraft also may use MLI as a first line of defense against dust impacts. This normally means spacing it a cm or so away from the surface it is insulating. Also, one or more of the layers may be replaced by a mechanically strong material, such as beta cloth.

In some applications the insulating layers must be grounded, so they cannot build up a charge and arc, causing radio interference. Since the normal construction results in electrical as well as thermal insulation, these applications may include aluminum spacers as opposed to cloth scrim at the points where the blankets are sewn together.