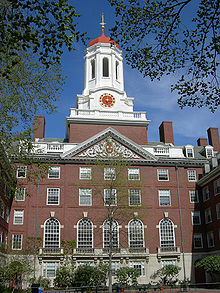 The central tower of Dunster House.

Dunster House, built in 1930, is one of the first two Harvard University dormitories constructed under President Abbott Lawrence Lowell's House Plan, and one of the seven Houses given to Harvard by Edward Harkness. In the early days, room rents varied based on the floor and the size of the room. Dunster is unique among Harvard dormitories for its sixth-story walk-up (it has no elevators); these rooms were originally rented by poorer students, such as Norman Mailer.

The House was named in honor of Henry Dunster, a "learned, conscionable and industrious man," who became the first President of Harvard University, and was appointed to the Harvard presidency at the age of thirty-one, immediately after his arrival in the Massachusetts Bay Colony in 1640. He held the office during the early "troublous" years of the Colony, and left the College in 1654 after it had become a well-established institution.

The tower of Dunster House is inspired by, but somewhat smaller than, the famous Tom Tower of Christ Church, Oxford. Above the east wing is the Dunster family coat of arms.

Dunster is located on the banks of the Charles River, next to the John W. Weeks Footbridge, which links Harvard's Allston and Cambridge campuses. From above its architectural shape, unusual among the River Houses, resembles a branching flowchart due to the odd trapezoidal footprint of the land on which it was built.

Dunster, like many of the Harvard Houses, has many yearly traditions, including Keg Races in the Fall, The Messiah sing-a-long in the winter, the Goat Roast in the spring, and the yearly Dunster House Opera. It is known as one of the more social houses at Harvard, boasting popular Happy Hours and formals in either the beautiful dining hall or courtyard.

Famous inhabitants of Dunster House have included Al Gore and Tommy Lee Jones, who were roommates there in the late 1960s. Other notable Dunster alumni include Al Franken, Darren Aronofsky, Christopher Durang, Susan Faludi, David Halberstam, Lindsay Hyde, Jean Kwok, Norman Mailer, Erich Segal, Caspar Weinberger, Ryan Fitzpatrick, and Deval Patrick. For many years Dunster was reputed to have the highest grade-point average (GPA) of any house. There was a murder-suicide in Dunster House in May 1995 in which Sinedu Tadesse murdered her roommate, Trang Ho;[3] the previous month, April 1995, two Dunster-affiliated students, Kathryn L. Tucker '94 and Ansgar Hansen '97, committed suicide.[4]

Dunster's mascot is the moose, inspired by the three golden elk on the Dunster family crest.