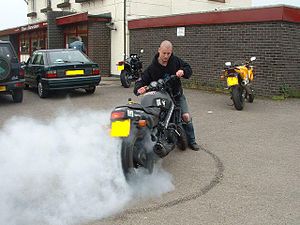 Motorcycle stunt riding, sometimes referred to as simply stuntriding, is a motorcycle sport characterized by stunts involving acrobatic maneuvering of the motorcycle and sometimes the rider. Common maneuvers in stunt riding include wheelies, stoppies, and burnouts. Sport bikes have become a common vehicle for stunts.

Stunters are a controversial subculture of motorcycling. Stunters perform motorcycle stunts on sportbikes, both on public roads and in private venues. Some stunters have organized commercial teams.

A wheelie on a motorized vehicle is nothing new. In drag racing they are considered a problem, robbing power that could be used to accelerate the vehicle faster, and many classes of drag racing use wheelie bars to prevent them.

But those are for vehicles specifically built for drag racing, which rarely are street-legal, or unmodified from stock. In contrast, since at least the 1970s, some motorcycles straight from the showroom floor were able to be wheelied.

In the late 1980s and continuing today, motorcycles, and especially sportbikes, have become lighter and more powerful, and have therefore become easier to wheelie. Other stunts have also become possible if not easy with the advancement of motorcycle technology. As Martin Child wrote in Bike, "With lighter, shorter, better-braked bikes on the market, the stoppie has never been so easy for so many."[1] But at the same time, the cost of a motorcycle has remained relatively low compared to other street-legal vehicles with similar power-to-weight ratios.

In the 1990s some riders made performing stunts the primary focus of their riding. A wheelie or other stunt was not just something to do while riding, it became the main goal in riding.

Stunters will modify their motorcycles to better adapt them to the sport. Stunting equipment includes: 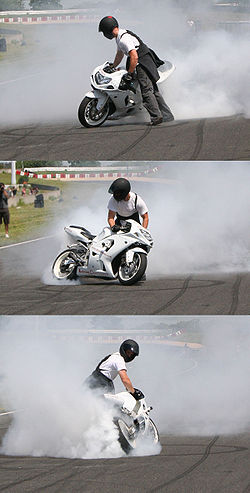 A basic wheelie is the lifting of the front of the motorcycle off the ground by means of either power or use of clutching. There are many variations of the basic wheelie...

The "circle" is a wheelie performed traveling entirely within a circle, which is very difficult to do. Even more difficult is a circle wheelie with the rider's right foot on the left peg, which is called a "Ralph Loui".

The "12 o'clock" is a very high wheelie, past the normal balance point of the motorcycle. A variation of this is the "coaster", in which the bike is balanced without the acting force of the motor, that is, with the clutch pulled in. The motorcycle is pulled so far back beyond the balance point of the wheel that the rider must constantly ride the rear brake to keep his machine from falling over backwards, causing him to slow down. A rider can pull in the clutch to create the effect of a wheelie with no engine noise. Conversely, some riders will pull in the clutch and peg the engine on its rev-limiter, called a "rev-limiter coaster".

The opposite of the 12 o'clock is a wheelie in which momentum is used to lean forward, lifting the rear wheel while continuing to move forward at a high speed — this is called a "nose wheelie".

A wheelie performed by two or more men on the same motorcycle is called "man-dom".

Burnouts use the power of the engine and braking force to cause the rear wheel to spin, heating the rear tire and producing smoke. There are different types of burnouts, like the "suicide burnout" with the rider dismounted and standing in front of the motorcycle. The "chainsaw" is an form of burnout performed by the stunter standing beside a motorcycle lying on its side holding the motorcycle exclusively by the right handle bar then causing the bike to "orbit" around the rider while maintaining control during the burnout. In a "merry-go-round", the rider lays the bike on its side and climbs onto it, then leans back on the bike while holding the throttle, causing the bike to spin round while doing a burnout.

Cytrix, a display team formed by members of the White Helmets at the end of World War II, toured for 20 years up to 1967. They toured mainly the UK, but also on two occasions the US (across 23 mid-west states over 4 months) and Europe. They appeared at UK agricultural shows and at Wembley on a number of occasions during the Speedway finals. The four consistent members of the team were Basil Shelbourne, Ted Way, Jet Jones and Neil Hack. Originally they rode Matchless bikes but later rode BSA Gold Stars. Stunts were typically run at speeds of 60 mph and included tunnel-of-fire jumps. They rode without crash helmets or leathers, just shirt, tie, jodhpurs and riding boots.[citation needed]