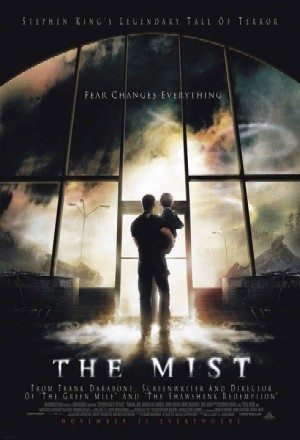 
"The Mist" (also known as "Stephen King's The Mist"), is a 2007 American based on the 1980 "" by . The film is written and directed by , who had previously adapted Stephen King's work and had been interested in adapting "The Mist" for the big screen since the 1980s.

With an ensemble cast including , , , and , Darabont began filming "The Mist" in Shreveport, in February 2007. The director revised the ending of the film to be darker than the novella's ending, a change to which Stephen King was amicable. Unique creature designs were also sought to differ from creatures in past films. "The Mist" was commercially released in the United States and Canada on , .

Following a violent , a small town community comes under vicious attack from creatures prowling in a thick and unnatural . Local rumors point to an called “The Arrowhead Project” conducted at a nearby , but questions as to the origins of the deadly vapor are secondary to the group's overall chances for survival. Retreating to a local , the survivors face off against each other whilst attempting to take a united stand against an enemy they cannot even see. [cite web | url=http://www.fandango.com/movies/1/movieoverview.aspx?mid=108104& | title=The Mist | publisher=Fandango | accessdate=2007-11-20 ] [cite web | url=http://movies.yahoo.com/movie/1809834165/info | title=Stephen King's The Mist (2007) | publisher= | accessdate=2007-11-20 ]

After a massive , commercial artist David Drayton () and his wife Stephanie (Kelly Collins Lintz) witness the advance of an unusual mist from across the lake bordering their property. More immediately concerned with cleaning up in the aftermath of the storm, David and neighbor Brent Norton (), along with David's five-year-old son Billy (), go to the local grocery store which, like the rest of the community, was left without power. While at the store, an increasing amount of police activity in the streets draws the attention of the patrons, culminating with Dan Miller () running to the store with a bloody nose warning of something dangerous in the oncoming mist. Seeing the mist roll over the parking lot and hearing the scream of a man who ventures outside, the store patrons heed Miller's advice and seal themselves within the store, which is soon violently shaken, as if by an . With visibility reduced to near-zero outside and uncertainty surrounding the fate of the man heard screaming before, a takes hold. Unable to convince anyone to escort her back home to her children whom she left alone, a mother of two (Melissa McBride) departs into the mist by herself.

As confusion sets in, the deeply religious Mrs. Carmody () suspects the onset of as others search for a different answer. While trying to find a blanket for his son, David hears something pushing against the door of the loading dock. He is unable to convince local mechanics Myron () and Jim () of what he witnessed, and they, and bag-boy Norm (Chris Owen), open the loading-bay door in an attempt to repair the ailing generator. A set of otherworldly tentacles lined with claws grip Norm, dragging him away before the loading-bay door is closed again. Now aware of the deadly properties of the mist and the danger it poses to everyone in the store, David and assistant manager Ollie Weeks () try, and fail, to convince Norton and other skeptical patrons not to go outside. They tie a clothesline around the waist of a man who agrees to retrieve a shotgun from Cornell's () car, so that they can measure how far he is able to go. The clothesline goes taut, is pulled out, and when pulled back drags the man's severed lower body into view, convincing the rest of the store's patrons of the danger outside.

The patrons prepare to defend themselves by making torches. New creatures appear from the mist at nightfall; enormous flying insects perch on the store windows, and -like animals with two pairs of wings pluck them off, eventually breaking one of the windows and allowing the creatures in. Two people die in the ensuing attack, and another is badly burned. During the attack, one of the insects lands on Mrs. Carmody, then flies away instead of delivering a fatal sting. Viewing this as validation of her beliefs, Carmody begins quickly gaining followers among the distraught patrons in the belief that the world is ending and a is needed to save them from the wrath of God. After Amanda Dumfries (), who has been looking after Billy, discovers a friend who committed suicide by , Billy makes his father promise that he will not let the monsters catch him. Aware of the growing danger Carmody poses to the group, David turns to thoughts of escape. To test the idea of safely reaching his car, he and a group of volunteers try to retrieve medical supplies for the burn victim from the pharmacy next door, but are attacked by spider-like creatures which claim the lives of two of the volunteers. Seeing the failed expedition, Carmody's following grows stronger, with a visibly shaken Jim becoming one of her most vocal followers.

Billy, who had begged his father not to go out and leave him behind, makes him promise that from now on they will stay together. With the discovery that two soldiers from the Arrowhead Project committed suicide during the expedition's absence, the remaining soldier, Wayne Jessup (), reveals that the project, an attempt to look into dimensions, was the origin of the mist. At Carmody's command, her enraged followers stab the young soldier several times in the stomach and throw him outside, where he is quickly killed by an enormous, -like creature. Preparing to leave, David and his group are intercepted by Mrs. Carmody, who demands that Billy and Amanda are to be sacrificed. As the crowd advances to grab Billy and Amanda, Ollie Weeks shoots Carmody dead. The group then proceeds out the front door. Ollie, Myron, and Cornell are killed in the ensuing escape and Bud Brown (Robert Treveiler) runs back to the store in panic, but Amanda, David, Billy, Dan and Irene () make it safely to the car.

Driving through the mist, David returns home to find his wife has fallen victim to the spider-like creatures. Heartbroken, he drives the group south, witnessing the destruction left in the wake of the mist and encountering a tentacled beast towering hundreds of feet high. Eventually, they run out of gas without finding any other survivors. While Billy is sleeping, the four adults accept their fate, deciding that there is no point in going any further. With four bullets left in the gun and five people in the car, David shoots Amanda, Dan, Irene, and his son, Billy, to spare them a more violent death by the creatures. Sobbing, he attempts to shoot himself with the now-empty gun before exiting the vehicle to let the creatures in the mist take him. He hears what sounds like a creature moving toward him, but instead turns out to be a , followed by a long column of other military vehicles and disembarked soldiers in s. As the mist parts, several trucks filled with survivors pass David, among them the mother whom nobody from the store would escort and her two children. David realizes in horror that he had been driving away from help the whole time and falls to his knees screaming whilst two soldiers watch in confusion.

Director Frank Darabont chose to film "The Mist" after filming the "straighter dramas" "The Shawshank Redemption" and "The Green Mile" because he "wanted to make a very direct, muscular kind of film". Darabont conceived of a new ending in translating the novella for the big screen. Author Stephen King praised Darabont's new ending, describing it as one that would be unsettling for studios. King said, "The ending is such a jolt—wham! It's frightening. But people who go to see a horror movie don't necessarily want to be sent out with a ending." [cite news | author=Anthony Breznican | url=http://www.usatoday.com/life/movies/news/2007-06-20-stephen-king-movies_N.htm | title=Stephen King adapts to Hollywood | publisher= | date= | accessdate=2007-11-19 ]

Darabont described "The Mist" as quaint in its elements of monsters and fear of the unknown compared to the contemporary popularity of films with . The director saw "The Mist" as a throwback to and , explaining, "It's people at each other." He highlighted the element of fear in the film in how it compelled people to behave differently. Darabont said, "How primitive do people get? It's "" that happens to have some cool monsters in it." He also drew parallels to "The Twilight Zone" episode "" and the 1944 film "Lifeboat".

In the novella, the character David Drayton - who is married - has a sexual relationship with Amanda Dumfries, who is also married. Darabont did not want to attempt conveying on screen the protagonist being involved in an extramarital affair. The characters in the film, portrayed by and respectively, instead share a more emotional relationship. Jane explained, "We kind of form a little family, sort of surrogate family where my son and I’m a father and she becomes the mother to the son. We become a little unit as we’re trying to get through this nightmare together." Holden compared the nightmare to what refugees experienced at the during .

Darabont sought to pursue "a more fluid, ragged documentary kind of direction" with "The Mist",

In the opening shot, David is drawing in his room. The drawing is based on 's Dark Tower series, and the drawing was actually painted by famous movie poster designer, . Darabont also put in re-productions of his posters and illustrations for "The Thing" ("The Thing"'s director ), "", "", and "The Green Mile", paying a tribute to him.

Darabont collaborated with the production designer to create a mix of eras to avoid appearing as a but also not looking so contemporary. Cell phones were used by characters in "The Mist", but the in the film did not dress in modern attire. While MP also drove an old instead of a , other cars seen in the film are modern models.

Over a hundred extras from Shreveport, Louisiana were included in "The Mist". Unlike conventional application of extras in the background of a film, sixty of the hundred extras were interwoven with the film's ensemble cast. [cite news | author=Alexandyr Kent | url=http://www.shreveporttimes.com/apps/pbcs.dll/article?AID=/20071118/LIVING/711150360/1004/LIVING | title=The core of a horror flick: 'The Mist' features dozens of local extras | publisher=The Times | date= | accessdate=2007-11-20 ] Additional elements giving the film a local flavor include the prominence of local Louisiana brands such as Zapp's potato chips. Exterior shots of the house at the beginning were in Shreveport. Exterior shots of the supermarket were in .

Frank Darabont chose to use music to minimal effect in "The Mist" in order to capture the "heavier feel" of the darker ending that he had written to replace the one from the novella. The director explained, "Sometimes movie music feels false. I’ve always felt that silent can be scarier than loud, a whisper more frightening than a bang, and we wanted to create a balance. We kept music to a minimum to keep that verité, documentary feel." Darabont chose to overlay the song "The Host of Seraphim" by the band , a spiritual piece characterized by wailing and chanting. As a fan of Dead Can Dance, Darabont thought that the song played "as a requiem Mass for the human race." [cite news | author=David Frese | url=http://www.kansascity.com/entertainment/story/362931.html | title=Frank Darabont dares to alter a Stephen King classic: ‘The Mist’ | publisher= | date= | accessdate=2007-11-20 ] The original score was composed by Academy Award-nominated composer Mark Isham.

"The Mist" was released on DVD on , . The single-disc includes an audio commentary by writer/director Frank Darabont, eight deleted scenes with optional commentary, and "A Conversation With Stephen King and Frank Darabont" featurette. The two-disc edition includes an exclusive black-and-white presentation of the film (as well as the color version), and five featurettes ("When Darkness Came: The Making of The Mist", "Taming the Beast: Shooting Scene 35", "Monsters Among Us: A Look at the Creature FX", "The Horror of It All: The Visual FX of The Mist", and ": Appreciation of an Artist").