The Chaser (Korean: 추격자 Chugyeogja) is a 2008 South Korean thriller film starring Kim Yoon-seok and Ha Jeong-woo. It was directed by Na Hong-jin in his directional debut. The film, which was inspired by Korean serial killer Yoo Young-chul, was shot on location around Mangwon in the Mapo-gu district, Seoul.

Eom Joong-ho is a dishonest, ex-detective turned pimp who is in financial trouble because two of his girls have gone missing. One night he sends Mi-Jin, one of his few remaining girls to a customer. But he later realises that this is the same person who was the last to see his missing girls. Believing that this man is reselling his women, he goes to look for Mi-Jin. On the way he contacts his old police task force to ask for some help. But they cannot assist because the Mayor of Seoul, who they are guarding, has just been attacked with human feces during a walkabout. The police are now preoccupied with a media storm because they have suffered humiliation for failing to protect the mayor.

Mi-Jin wakes up tied in a dingy bathroom. Her "customer", Je Yeong-min, comes in with a bag of tools. He tells her that a previous victim had her tongue cut out for screaming too much. Using a hammer, he tries to drive a chisel into her head. But she resists and he hurts his hand, enraged, he hits her on the back of the head with the hammer. Moments later callers from the local church arrive at the house inquiring about its owner, Mr Park. Yeong-min has no time to finish off Mi-jin so he invites the elderly couple in and butchers them.

But while searching the area for a parking spot in an attempt to ditch their car, he collides with Joong-ho's vehicle in an alleyway. Joong-ho senses that the man, Yeong-min, is hiding something because he will not give him his phone number so they can sort the insurance out. Joong-ho calls the customer's number establishing this is the man he wants. Yeong-min tries to run away but is caught and badly beaten by Joong-ho. On returning to the collision, both men are arrested by a suspicious local cop. At the station, Yeong-min admits he has killed up to nine people but hints Mi-jin could still be alive. A fracas starts when competing divisions all want to investigate the previous high-profile unsolved murders in the area. The chief arrives and throws the book at everyone because of Yeong-min's injuries. He is concerned the beating will be picked up by the media following the night's earlier mayoral incident.

Despite his confession, the police have no physical evidence so they cannot detain Yeong-min for longer than 12 hours. In order to get some, Joong-ho goes to Mi-jin's apartment to collect DNA samples to match against the blood found on the suspect's clothing. In the apartment, he discovers Eun-ji, Mi-Jin's daughter, home alone. Reluctantly he takes her with him while he follows up a lead in Yeong-min's home town. There he learns the suspect had been sent to prison for three years for attacking his own nephew. They return to the area where Mi-jin went missing. Following a lead, Joong-ho finds a place where Yeong-min had once been living. On the walls are a host of religious drawing. But while Joong-ho is away, Eun-ji wanders off after following a woman that looks like her mother. Off camera, she is apparently knocked down by a delivery driver on a moped in a hit and run. After a frantic search, Joong-ho finds her and takes her to a hospital. He signs the forms as her father.

Meanwhile time has run out for the police. The prosecutors office order that Yeong-min be released because the police have no evidence. Secondly the reopening of high-profile murder cases at a time when the police have been publicly shamed will not be accepted by the media. The prosecutor tells the police chief that the arrest, the suspect's suspicious injuries and rapid confession will be portrayed as the police's vapid attempt to save face. To avoid the political fallout, Yeong-min is released without charge. While at the same time, the chief orders the arrest of Joong-ho as a scapegoat because he attacked the suspect. Despite being taken, the former cop escapes from the police van to look for Mi-jin.

Unknown to anyone, Mi-jin freed herself and escaped from the house and the walled garden that is full of human remains. Badly injured but lucid, she finds help at the corner shop. Just as Yeong-min approaches the house he stops at the same shop to buy some cigarettes. The shop keeper innocently tells him what has happened to Mi-jin and that there is "maniac" loose. Taking a hammer, he kills the shop owner before killing and decapitating Mi-jin. Arriving at an undetermined time later, Joong-ho finds the street closed off by the task force police and the store a bloodbath.

The police realising that they have now been humiliated again throw everything into the search for Yeong-min. Meanwhile Joong-ho, who is bereft at what has happened, follows up his detective's hunch and visits the local church; a link between the house callers and the car that Yeong-min had been driving the night of the accident. Standing outside the church, Joong-ho notices that the statue of the crucified Jesus matched the drawings he had seen in the room. Inquiries with the deacon lead him to the "assistant" who was staying at Mr Park's house.

On arrival Joong-ho discovers that a now smartly-dressed Yeong-min, with his bag of tools, is just about to leave. A massive fight ensues in which a fish tank containing the body parts of one of the previous prostitutes is smashed. Eventually Joong-ho prevails but just as he is about to bring a hammer down on Yeong-min's skull the police burst in and restrain the former policeman. As Joong-ho is pushed face down to the ground, he looks into the dead eyes of of the prostitute and sees images of Mi-Jin and her daughter.

The film ends with Joong-ho sitting silently in the hospital room alongside Eun-ji's bed. He takes her hand in his own.

The Chaser was released in South Korea on 14 February 2008.[1] On its opening weekend it grossed $3,914,847 and was ranked second at the box office, behind American film Jumper.[2] It then topped the box office for three consecutive weekends,[3] and as of 1 June had grossed a total of $35,760,133.[4] The Chaser received a total of 5,120,630 admissions nationwide, which as of September 2008 makes it the year's third most popular film in South Korea, after The Good, the Bad, the Weird and Speedy Scandal.[1] 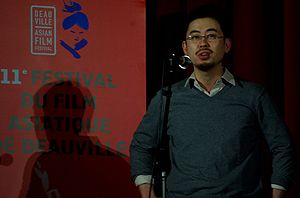 In March 2008, the remake rights to The Chaser were bought by Warner Bros. for $1 million. William Monahan was in early discussions to write the script, with Leonardo DiCaprio named as a potential star, though no deals have yet been set. Both were involved in Martin Scorsese's The Departed, a successful remake of Hong Kong thriller Infernal Affairs.[5] an indian bollywood movie murder2 is also a remake of this movie this movie was release on july 8;2011