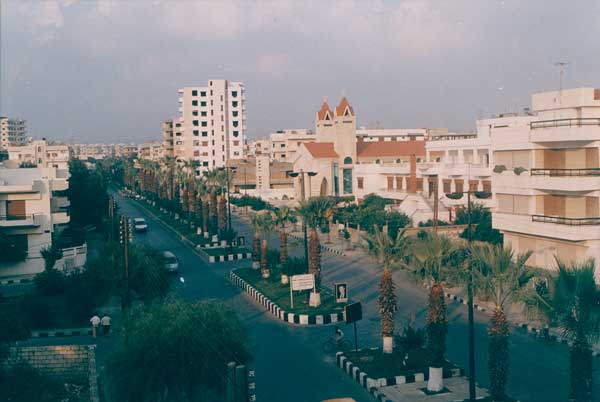 Tartus ( _ar. طرطوس, also transliterated Tartous) is a city in , the capital of . The city was known as Antaradus in Latin or Antartus and Tortosa by the rs. Tartus is 220 km northwest of and less than one hour drive south of .

Tartus is the second largest port city on the Syrian coast after and largest city in with an estimated population of 93,000 inhabitants as of 2007. [ [http://world-gazetteer.com/wg.php?x=&men=gcis&lng=en&dat=32&geo=-202&srt=npan&col=aohdq&pt=c&va=&srt=pnan Syria: largest cities and towns and statistics of their population] ] The majority of the population is ethnic . However, there are about 3,000 people of Greek origin who reside mainly in the town of just south of Tartus.

The city lies on the eastern coast of the bordered by the to the east. The island of , the only inhabited in Syria, is located a few kilometers off the shore of Tartus.

Tartus occupies mostal a flat area, surrounded to the east by hills composed mainly of and, in certain places around the town of , .

The climate is Mediterranean, with short winter months and a moderate temperature from April to October. The hills to the east of the city create an alternative environment and climate. Tartus is known for its mild weather and high precipitation. Humidity in the summer can reach 80%. [ [http://www.cbssyr.org Central Bureau of Statistics] ]

The History of Tartus goes back to the when it was founded as a n of Aradus. [ [http://lexicorient.com/e.o/tartus.htm Tartus] Encyclopaedia of the Orient. Retrieved 2007, 06-26] The colony was known as Antaradus (from Latina "Anti-Aradus", meaning "The town facing Arwad"). Not much remains of the n Antaradus, the mainland settlement that was linked to the more important and larger settlements of Aradus, off the shore of Tartus, and the nearby site of . [ [http://www.syriagate.com/Syria/about/cities/Tartous/history.htm History of Tartous] Syria Gate. Retrieved 2007, 06-26]

The city was favored by emperor Constantine for its devotion to the cult of the Virgin Mary. The first chapel to be dedicated to the Virgin is said to have been built here in the 3rd century.

Muslim armies conquered Tartus under the leadership of in .

In 1123 the Crusaders built the church of Our Lady of Tortosa upon this site. It now houses this altar and has received many pilgrims. The Cathedral itself was used as a mosque after the Muslim reconquest of the city, then as a barracks by the Ottomans. It was renovated under the French and is now the city museum, containing antiquities recovered from and many other sites in the region.
retrieved Tartus from the Crusaders for a brief time before it was lost again. In 1152, Tortosa was handed to the , who used it as a military headquarters. They engaged in some major building projects, constructing a castle with a large chapel and an elaborate keep, surrounded by thick double concentric walls. ["Lost Worlds: Knights Templar". video documentary, first aired , .] The Templars' mission was to protect the city and surrounding lands, some of which had been occupied by Christian settlers, from Muslim attack. The city of Tortosa was recaptured by in 1188, and the main Templar headquarters relocated to . However, in Tortosa, some Templars were able to retreat into the keep, which they continued to use as a base for the next 100 years. They steadily added to its fortifications until it also fell, in 1291. Tortosa was the last outpost of the Templars on the Syrian mainland, after which they retreated to a garrison on the nearby island of , which they kept for another decade.

Tartus is an important trade center in Syria and has one of the two main ports of the country on the . The city port is experiencing major expansion as a lot of i imports come through the port of Tartus to aid reconstruction efforts in Iraq.

Tartus is a popular for tourists. The city offers good sandy beaches and several resorts. The city enjoyed major investments in the last few years. The largest being [http://www.antaradus.com "Antaradus"] waterfront development.

Tartus has a well developed road network and highways. The railway network connects Tartus to major cities in Syria, although only the Latakia-Tartus passenger connection is in service.

An international airport is fully operational at Al Basil, which is 80 kilometers north of Tartus. There is also a ferry boat link to the island of Arwad.

The city hosts a Soviet-era naval supply and maintenance base, under a 1971 agreement with Syria,

On Sept 22 2008, Russian Navy spokesman Igor Dygalo said the nuclear-powered Peter the Great cruiser accompanied by three other ships sailed from the Northern Fleet's base of Severomorsk on Monday. The ships will cover about 15,000 nautical miles to conduct joint maneuvers with the Venezuelan navy. Dygalo refused to comment on Monday's report in the daily Izvestia claiming that the ships were to make a stopover in the Syrian port of Tartus on their way to Venezuela. Russian officials said the Soviet-era base there was being renovated to serve as a foothold for a permanent Russian navy presence in the Mediterranean. [cite news |title= Russian navy ships head to Venezuela. |url= http://www.cnn.com/2008/WORLD/americas/09/22/russia.venezuela.ap/index.html ]

The historic centre of Tartus consists of more recent buildings built on and inside the walls of the Crusader-era Templar fortress, whose moat still separates this old town from the modern city on its northern and eastern sides. Outside the fortress little historic remains can be seen, with the exception of the former cathedral of Notre-Dame of Tartus, from the 12th century. The church is now the seat of a museum. Former President Hafez Assad and his predominantly Islamic administration had promised to return the site to the Christians as a symbol of deep Christianity in Syria, however he died before this promise was executed. Assad's son, President Bashar Assad, has claimed to honor his father's promise.

Tartus and the surrounding area are rich in antiquities and archeological sites. Various important and well known sites are located within a 30-minute drive from Tartus.

Here is a list of some of the main attractions of the city:
*The old city of Tartus.
* Castle, north of the city.
*The historic Town of .
* island and castle.
*The ancient cathedral of Our Lady of Tortosa, now used as the city museum.
* Palace.
* Temple.
* resort.
*" Drekish Town " Nature and History