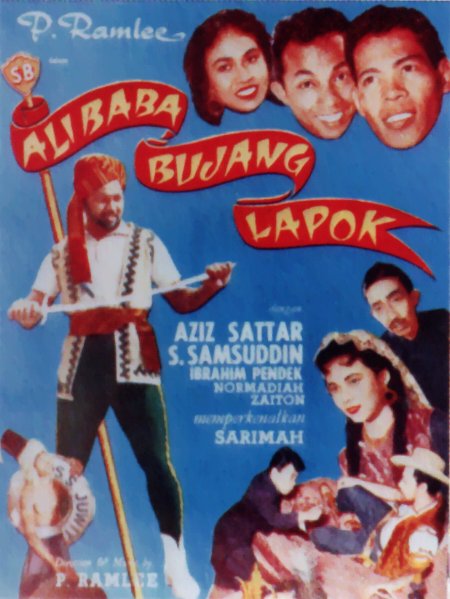 "Ali Baba Bujang Lapok" is a 1960 n comedy film directed by, written by and starring n silver-screen legend . Based loosely on the story of from 1001 Arabian Nights, the film is occasionally and contains elements of anarchic comedy, burlesque comedy and . The title includes the suffix "Bujang Lapok" because it is the third installment in the "Bujang Lapok" series of comedy films that star the trio of , and . This film marked the feature film debut of , who would go on to a long movie career, and is also notable as one of the few films where he plays the villain.

Ali Baba () is poor man who cannot seem to succeed in life. He constantly sends his wife to his brother Kassim Baba's house to borrow flour so they can eat, but the stingy Kassim Baba () is frustrated at his brother and constantly reminds his wife of Ali Baba's uselessness. One day, when Ali Baba is out gathering firewood he sees a group of 40 thieves marching through the woods carrying loot and riches. He hides in a tree and watches their leader () stand in front of a mountain of rock and sing a verse of seemingly nonsensical words (in ) which cause a passageway in the mountain to open. Ali Baba waits until the thieves have all left the cave before coming out of the tree and using the magic words to open the cave. Inside he discovers a variety of riches and wealth, but he only takes a box of gold coins.

With the gold coins Ali Baba is able to pay back his brother everything he owes and live in relative comfort. Kassim Baba is overcome with curiosity and pesters Ali Baba to tell him how he suddenly came into wealth. Ali Baba eventually relents and tells him about the cave and the magical verse to open the cave, but before he can tell him the verse to close the cave or about the thieves who use it, Kassim Baba rushes off to find the cave.

Kassim Baba, in his greed, tries to steal everything in the thieves' cave. He is caught when the thieves return while he is still there. After trying repeatedly to stall, the eventually kill him. When Kassim Baba does not return, Ali Baba sneaks out to the cave, where he finds his brothers' remains. He collects them and has Kassim Baba sewn together and buried.

The thief leader soon notices Ali Baba and decides to target him for their next robbery. After his thieves fail twice, the leader decides to pose as a merchant visiting Ali Baba's house, while his thieves hide in oil jars that are kept in the courtyard. Ali Baba's servant, Marjina, comes up with a plan to stop the thieves, in which actual boiling oil is poured into all the individual jars. After all are defeated, she attacks and kills the leader himself. Ali Baba, grateful for her loyalty, gives her her independence.

Although "Ali Baba Bujang Lapok" is filmed as a period piece set in an unidentified country with a Middle-Eastern look, it is filled with deliberate anachronisms which are used for humour. Among them are the appearances of s, s, s, telephones and guns. When on leave, the 40 thieves also dress as various anachronistic characters, among them a , wig-wearing and a World War 2-era Japanese soldier.

In addition, the 40 thieves seem to function as a proper business, offering members health benefits, performance-based bonuses and overtime pay. Like the above anachronistic items, these are played for humorous effect (e.g. the leader of the thieves turns down a job because Sunday is a public holiday, and when the irate requester threatens to find other thieves the leader warns that if he does so the Thieves Union will take action).