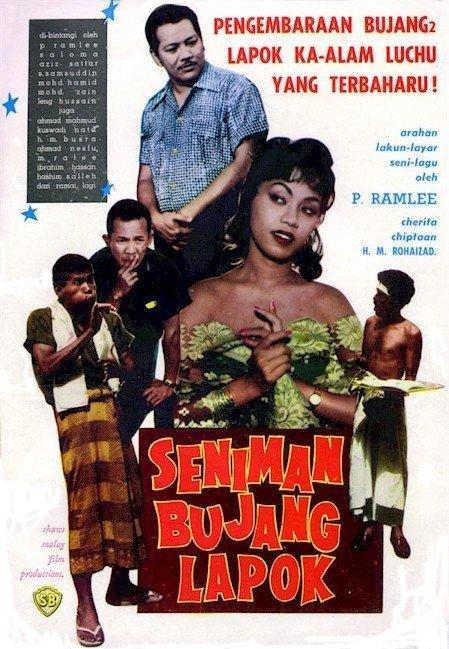 "Seniman Bujang Lapok" ("The Three Bachelors as Actors") is a 1961 n film directed by . It is the fourth installment in the "Bujang Lapok" series of films, but the last to feature , and as the main trio of actors. However, it is not a direct sequel to the previous "Bujang Lapok" films, as there are no references to the events of the previous films.

The film is a self-referential spoof of the of the late 1950s/early 1960s. The plot revolves around the main trio attempting to become actors and break into the film business, and hence features a fictionalised look at the behind-the-scenes process of Malay film-making during that time. The line between reality and fiction is blurred as real film industry places are used, real film sets of previous films are used for the film-within-the-film, and all the featured actors use their real-life names or derivatives thereof.

The film-within-the film, "Setan Angkat Julang", is a fictionalised account of the historical event of "Sultan Mahmud Mangkat Dijulang", i.e. the death of Sultan Mahmud II as he was carried upon an altar.

Fifteen years after this film was released, another "Bujang Lapok" film was made: "Bujang Lapok Kembali Daa" ("The Return of the Three Bachelors"). The fifth and final installment in the series was directed by and featured 's son Nasir P. Ramlee taking over 's part in the trio.

The "bujang lapok" trio of Ramli, Sudin and Ajis go to Jalan Ampas Studio in response to an open call audition. During their audition, they drive director Ahmad Nisfu crazy by forgetting the script and improvising with their own lines. However, the studio boss likes their natural comedic talent and tells the director that the trio are to be signed on for an oncoming film.

Back at home, Ramlee is in love with a nurse, Cik Salmah, who is being watched by Sharif Dol, a villain from a neighbouring village. Sharif Dol sends his mother to propose but Salmah turns him down. The vengeful Sharif Dol burns down the entire village to get even, but is later arrested for his crime.