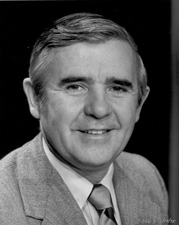 Paul Laxalt was born in , the son of a Basque shepherd, Dominique, and a Basque mother who had a restaurant in Carson City, the capital of Nevada. [ [http://www.library.unr.edu/sheepherders/biography.html "Stories of Sheep People: Herders & Carvers"] @ University of Nevada, Reno Libraries]

Paul Laxalt was elected of in 1962 and served until 1966. In 1964 he ran for the U.S. Senate against Democratic incumbent and lost a controversial election by only 48 votes; it is very likely he would have won had it not been for 's landslide reelection victory. Two years later, he was elected Governor of Nevada, defeating two-term incumbent , and served until 1970 when he decided against seeking re-election. He ran for Nevada's other Senate seat in the Watergate year of 1974 after 20-year incumbent retired. He defeated Lieutenant Governor in an election that was decided by less than 600 votes, becoming one of the few bright spots in what was otherwise a bad year for Republicans.

Laxalt's tenure as governor was noteworthy for coinciding with the purchase of a large number of hotel-casinos by reclusive billionaire . Laxalt's tenure also marked an increase of corporate ownership of gaming operations in the State of Nevada.

During his time as governor, Paul Laxalt became close friends with , who was then in his first term as governor of . They worked on many issues of mutual interest to the two states, principally those dealing with the preservation of Lake Tahoe. During Reagan's presidency, Senator Laxalt was sometimes referred to as the "First Friend."

During Laxalt's second term as U.S. Senator, he sued the newspaper for libel in relation to a 1983 article it published about some of Laxalt's business dealings. Laxalt sought $250-million in damages, and the newspaper countersued him, seeking $6-million. In 1987 both lawsuits were settled. Laxalt declared that pretrial investigations had found no evidence of the wrongdoing at issue. The newspaper maintained that it did not commit libel because it had never directly reported that Laxalt was involved in wrongdoing; it had merely reported the fact that a third party held suspicions that Laxalt was involved in wrongdoing. Thus the Bee did not retract its article, apologize, or pay damages. Laxalt was quoted as saying that the prospect of a trial had hindered fundraising for a possible presidential campaign. [cite web|url=http://www.time.com/time/magazine/article/0,9171,964635,00.html|date= |accessdate=2007-08-11 |title=American Notes LAWSUITS ]

In 1985 Reagan asked him to travel to the to warn President about the U.S. government's increasing concerns about the state of the Philippine economy and the threat posed by a insurgency. At the height of the Philippine crisis, Marcos called Senator Laxalt to ask for his advice. Laxalt famously said that Marcos should "cut and cut cleanly." Sixteen hours later, Ferdinand Marcos, after 21 years as president of the Philippines, departed the country, never to return. A potential bloody was thus averted.

Paul Laxalt's brother, , was a noted and prolific writer. His book, "," told the story of his father returning to his Basque homeland after almost 50 years in the American West, was an internationally acclaimed book that won several literary awards. Paul Laxalt was married to Jackalyn Ross, the daughter of a prominent federal judge in Nevada. [ [http://nv.gov/JLaxalt/jackalyn_ross_laxalt_Obituary.htm Jackalyn Ross Laxalt] @ State of Nevada Official Website] Paul and Jackie had five daughters, Gail Sheila Michelle Kevin and Kathleen, and one son, John Paul. He has twelve grandchildren and two great-grand children. Paul is currently married to his second wife, Carol, who had one daughter from a previous marriage, Denise.

Laxalt retired from the Senate in 1987 and made a brief but unsuccessful run for the Republican presidential nomination for the 1988 election. He was replaced by the man whom he had initially defeated in 1974 to win his Senate seat, future . Mr. Laxalt was a partner in the law firm of . [ [http://query.nytimes.com/gst/fullpage.html?res=9B0DE7DB1F3DF932A25752C1A961948260 Finley, Kumble, Major Law Firm, Facing Revamping or Dissolution - New York Times ] ]