The Society of Merchant Venturers (or just the "Merchant Venturers") is a private entrepreneurial and charitable organisation in the English city of Bristol, which dates back to the 13th century. At one time it was practically synonymous with the Corporation (local government) of Bristol and for many years had effective control of Bristol's port.[1]

A Guild of Merchants was founded in Bristol by the 13th century, and swiftly became active in civic life; by the 15th century it had become synonymous with the town's government. It funded John Cabot's voyage of discovery to Newfoundland in 1497. The society in its current form was established by a 1552 Royal Charter from Edward VI granting the society a monopoly on Bristol's sea trade.[2] They remained in effective control of Bristol Docks until 1848. Further charters were granted by Charles I, Charles II and Elizabeth II. The society was active in the English colonization of North America, helping to establish the Bristol's Hope and Cuper's Cove colonies in Newfoundland.

The first light on the island of Flat Holm was a simple brazier mounted on a wooden frame, which stood on the high eastern part of the island.[6] In 1733 the Society of Merchant Venturers of Bristol found the brazier to be unreliable and petitioned the General Lighthouse Authority, Trinity House, for an actual lighthouse, but the petition failed.[7] In 1735 Mr. William Crispe of Bristol submitted a proposal to build a lighthouse at his own expense. This initial proposal also failed but negotiations resumed in 1736 when 60 soldiers drowned after their vessel crashed on the Wolves rocks near Flat Holm. Following this disaster, the Society of Merchant Venturers finally supported William Crispe's proposal.[8] Crispe agreed to pay £800 (£110,552, $220,241 in 2008) for the construction of the tower as well as the fees permits.[6] The construction of the tower finished in 1737 and it began operating on 25 March 1738.[9]

In the 19th century the Society helped to fund the building of Brunel's Clifton Suspension Bridge and members of the society helped to establish the Great Western Railway. In the 1860s the Society acted with the Bristol Corporation to put Clifton Down and the adjoining Durdham Down under the control of a single Downs Committee. Alderman Proctor's Drinking Fountain on Clifton Down was built in 1872 by G and H Godwin in a Gothic Revival style to commemorate the 1861 presentation of Clifton Down to the City of Bristol. With the end of its control of the docks, the society moved towards a philanthropic role; in addition to its earlier almshouses, it established St Monica's Home of Rest, a substantial retirement home adjacent to Durdham Down.

The Society of Merchant Venturers comprises men and women, prepared to give their time and skills to support the organisation's objectives. The Merchant Venturers work closely with the wider community and many of its members play a role in Bristol’s commercial life and the institutions within the city. Its objectives are to: 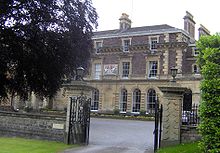 Merchant Hall on Clifton Down.

The Merchant Venturers aim to play an active role in education to help improve and sustain the quality of educational provision within Bristol. The organisation has been involved in education for at least 400 years, and in 2008 sponsored and supported two new Academies. Merchants' Academy in Withywood opened its doors in September 2008 to replace Withywood Community School.[10] The Society has invested £2m in the Academy and additional support has been provided.[11][12] Some concerns have been raised about the independence of the academy after the Society of Merchant Venturers awarded the contract for the building of the school to an architects firm connected to one of its members.[13]

The Merchants also sponsor Colston’s Girls’ School which moved from the independent sector to become an academy in September 2008.

The organisation has a tradition for supporting the provision of high quality care for the elderly and is currently involved with St Monica Trust[14] and the Cote charity.[15] The Merchant Venturers also support, through the means of charitable grants, many other organisations and causes within the greater Bristol area. They also retain the custodianship of some historic buildings and, together with the City Council, the open spaces of the Clifton and Durdham Downs.

Membership is by invitation to men and women in the business and commercial life of the greater Bristol area, and who are prepared to give their time and skills in support of the Merchant Venturers’ objectives. A list of members and short biographies are available on the website.

The society says it is not deliberately elitist, but also that the qualification for potential members is being "prominent in their own sphere of business and active in the charitable or public life of the area". An article in local magazine Venue claims that many members are not active in charity. There were no female full members of the society until 2003 (though Margaret Thatcher had earlier been made an honorary member), and as of 2009, there were no ethnic minority members. The society said it expected to have ethnic minority members in the future. There is a list of members, with brief biographies, on the website.

Venue claims that the Merchant Venturers control 12 charities and 40 trust funds, and also a private unlimited company, SMV Investments, that has major investments in defence contracting, tobacco, genetically-modified agriculture and the petroleum industry. Merchant Venturers serve on the boards of many local charitable and cultural organisations, and are guaranteed seats on the University of Bristol Court and the Downs Committee. It quotes Paul Burton of the University's School of Policy Studies as saying, "they exert quite a bit of influence and we, the people of Bristol, don't know much about them and can't hold them to account".[16]