Odet de Coligny (10 July 1517 – 14 February 1571) was a French cardinal of Châtillon, bishop of Beauvais, son of Gaspard I de Coligny and Louise de Montmorency, and brother of Gaspard and François, Seigneur d'Andelot.

His birth at Châtillon-Coligny, as his parents' second son, was recorded in his mother's book of hours.[1]

He occupied high church offices during this initial part of his career. He became prior of Saint-Stephan in Beaume in 1530. At the papal consistory of 7 November 1533 (at 16 and whilst still a layman)[2] he was created cardinal deacon, receiving the red hat and the titular church of Santi Sergio e Bacco three days later. Soon afterwards he became Abbot of Saint Bénigne de Dijon, of Fleury, of Ferrière and of Vaux de Cernay. In 1534 he became a Canon in Paris, participated in a papal conclave, and was made administrator of the metropolitan see of Toulouse on 29 April, despite not yet having been ordained a priest. This he held until his resignation from that role on 20 October 1550. Meanwhile, on 20 October 1535, he had become administrator of the see of Beauvais, and Abbot of Saint-Lucien de Beauvais from 1537.[citation needed]

He opted for the deaconry of S. Adriano on 25 February 1549 and participated in the papal conclave of 1549-1550. He was placed in charge of the library of France's Royal Privy Council and, using this and his other offices, he protected his friends Ronsard and Rabelais (in 1550 obtaining for the latter a ten year monopoly on book-printing - Rabelais dedicated his Quart Livre to Odet in gratitude).[citation needed]

In 1556 he became abbot of Ferrières on the recommendation of Pope Pius IV and Henry II, and four years later, Pius named him grand inquisitor of France, though the French parliament's opposition to the inquisition prevented him taking up the post. Sometime after 1560 he also became abbot of Grandchamps, of Quincy and (from 1560) of Vézelay. In sum, then, he was Abbot of St. Euvertius, of Fontainejean, Ferrières, and St. Benoît, and from 1554 to 1560 prior (and after 1560 provost) of St-Pierre de Mâcon.[citation needed] 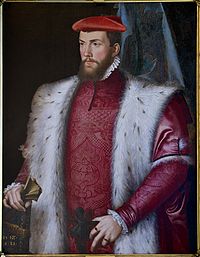 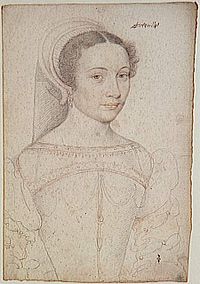 Isabelle Hauteville, Odet's mistress and wife, by Jean Clouet (artist of the image of Odet at the top of this page) 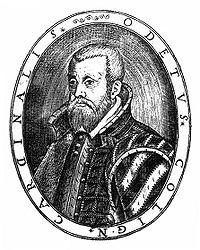 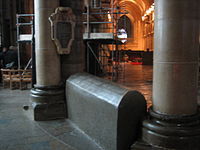 His tomb at Canterbury Cathedral

However, under his family's influence, he eventually went over to the Protestant camp himself, becoming a Calvinist Huguenot in April 1561. Indeed, this is said by some to be little surprise since his long church career was more motivated by ambition than piety,[3] though he was not the only French prelate to convert to Calvinism in this period (one other example is Jean de Monluc, bishop of Valence). Gathering a faction around himself, he greatly helped those of the Huguenot party. He participated with his brother in the religious wars and acted as a mediator between the Protestants and Queen Catherine de' Medici.

In 1562, he escaped the Inquisition to Lyon, relinquished his title of cardinal and called himself the count of Beauvais (comte de Beauvais), after his old bishopric. In the secret consistory of 31 March 1563, Pope Pius IV and the French parliament excommunicated him as a heretic and deprived him of all his offices. In December 1564, he married his mistress Isabeau/Isabelle de Hauteville (also known as Elizabeth de Kanteville or Mme. la Cardinale) at Montataire, without a Catholic ceremony.[4] and wearing, at the Huguenots' request, his cardinal's robe.

He fought at the Battle of Saint-Denis and in 1568 fled to England. In London, he requested monetary support for the French Protestants from Queen Elizabeth, who favoured him and his wife. Still wanted by the French government for treason, he remained in England, probably because he had secret orders from the French court to seek Elizabeth's hand in marriage for the prince of Anjou.

In 1568, his former abbacy of Ferrières was besieged by the troops of Louis de Condé, friend of the Coligny family and fellow Protestant. The abbey was pillaged and profaned and, although no monks were killed, the reliquaires and treasures of the abbey were dispersed, the tombs of Louis III, Carloman and Louis de Blanchefort[5] heavily damaged and the monks' stalls removed. Odet (abroad by then) only intervened to stop this after three days when his own financial interests in the benefice seemed threatened.

He was preparing to go from England to La Rochelle to join his brother when he died at the former pilgrims' lodge at Canterbury under mysterious circumstances (possibly poisoned by his servant, possibly - or possibly not - on the orders of the French government) in 1571.

He was therefore buried in a temporary and very plain tomb covered in hessian and plaster in the Trinity Chapel in the east end of Canterbury Cathedral. Meant to have been a temporary solution pending his body's return to France, this in fact never occurred and he still rests there.

One conspiracy theory relates that - Coligny not being high-ranking enough for permanent burial in this important part of the cathedral - the tomb in fact contains the hidden relics of Thomas Becket from his nearby shrine (dissolved 40 years earlier), Coligny's body having been returned to France or never in fact laid to rest here. This theory is not, however, accepted by historians.