The Model M keyboard is a class of computer keyboards manufactured by IBM, Lexmark and Unicomp, starting in 1984. The many different variations of the keyboard have their own distinct characteristics, with the vast majority having a buckling spring key design and many having fully swappable keycaps. Model M keyboards have been prized by computer enthusiasts and heavy typists because of the tactile and auditory feedback resulting from a keystroke.

The Model M is also regarded as a timeless and durable piece of hardware. Many units manufactured since the mid 1980s are still in use today, while the computers and monitors of the day are obsolete. Unicomp, which now owns the rights to the design, continues to sell Model M keyboards. Recently, the keyboards have made a comeback amongst writers and computer techs.[1] Unicomp has had difficulty making them profitable because they rarely break, and most retailers will not stock such an expensive keyboard.[1] 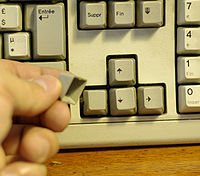 Keycap in a French Model M

The Model M was designed to be a more cost effective keyboard than the Model F keyboards it replaced. Production for the original Model M began in 1985, and the keyboards were often bundled with new IBM computers in the 1980s. These keyboards were produced by IBM in their plants in Lexington, Greenock and Guadalajara. The most common Model M variant is the part number 1391401, which was the keyboard of the IBM PS/2. Until 1987, the keyboards featured a detachable AT cable; after that, they were bundled with a detachable PS/2 cable. Cables came in both 5- and 10-foot lengths (1.5 and 3 metres). From about 1994 onwards, the majority of Model Ms were manufactured with non-detachable cables to cut down manufacturing costs.

In March 1991, IBM divested a number of its hardware manufacturing operations, including keyboard manufacturing, to the investment firm Clayton & Dubilier, Inc. in a leveraged buyout to form Lexmark International, Inc.[2][3] The Model M keyboard continued to be produced by Lexmark in the United States and Mexico, and IBM in Scotland with IBM being Lexmark's major customer.[4] Many of the keyboards had IBM assembly part numbers 52G9658, 52G9700, 82G2383, 42H1292, and others. Because of pricing pressures, many of these Model M keyboards were manufactured with a new lower-cost keyboard design to improve its competitiveness in the keyboard business.[5] Lighter weight plastic, integrated keyboard cable, and uniform print color on the keys were some of the changes made.

In 1996, Lexmark's contract to produce keyboards for IBM ran out, and Lexmark sold the keyboard manufacturing equipment to some of their employees, who formed Unicomp. The Model M, similar to part number 42H1292 but first renamed 42H1292U and subsequently the "Customizer", is still in production. Different configurations can be purchased from Unicomp, including updated 104/105-key layouts, a "Linux" model (where the Ctrl and Caps Lock keys, and the ESC and tilde keys, are swapped), models with integrated Trackpoint pointing sticks or integrated trackballs, and POS-specific models, such as those with built-in magstripe readers. When Lexmark stopped producing the Model M designs for IBM, IBM continued manufacture in their Scottish plant, and subcontracted production of the Model M13 Trackpoint II keyboard to Maxiswitch. Production of Model Ms by these companies ended in 1999 and 1998 respectively. Although current Unicomp models may be purchased for roughly 79 USD, original production models retain their value well among collectors as well as computer enthusiasts, and it is not uncommon to see them selling for upwards of 150 USD for a single, used unit.

There are numerous variations of the Model M, but many of them are exceedingly rare. Sometimes it may be problematic to get them to communicate properly with a modern computer. A PS/2 to USB adapter would be necessary for computers without PS/2 ports, and the AT Model Ms additionally require an AT to PS/2 adapter. Some PS/2 to USB adapters are unreliable because the Model M tends to draw more power than some adapters expect. In response to these complaints, Unicomp added USB models to their lineup. 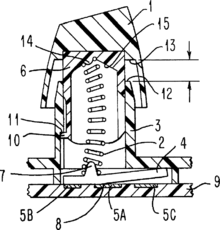 The model people commonly refer to when they mention "Model M" is Part No. 1391401, which was by far the most common. This enhanced keyboard model included the patented buckling spring design[6] and swappable keycaps, as well as the heavy and sturdy design of the Model Ms in general. This keyboard is widely praised as being well-built. Evidence of this can be seen in the fact that keyboard design has changed little in the past twenty years, while the designs of everything from PCs to monitors to mice have changed dramatically. The sturdy design (including heavy steel backplates and a high-quality, strong plastic frame) of the keyboard allows even the most abused to survive these years with ease. The various models of the keyboard had small differences, while keeping the style of the key mechanism that makes the boards unique. The 1391472 model, for example, does not have a separate number pad, rather it incorporates a number pad into the body of the main keys as many laptop keyboards do. Likewise, the early 1390120 series did not feature LED indicators for the locking keys.

Most fans of the Model M especially prize its feel and sound. Unlike the common (but cheaper) dome switch design, the Model M's buckling spring design gives users obvious tactile (a distinctive resistance as the keys are depressed) and aural (a characteristic, loud "click-clack") feedback. Many users report that they can type faster and more-accurately on the Model M than other keyboards.[7]

In addition, the Model M keyboard is less susceptible to dirt and wear and tear; while dirt will interfere with proper operation of a dome switch keyboard, the design of a buckling spring keyboard is such that any dirt that falls between the cracks usually fails to make it into the spring mechanism. Failure of the mechanism to operate properly would require a large amount of accumulation, which is unlikely to occur.

There are some drawbacks to the Model M design. Because the keyboard is so heavy, it is not as portable as many modern keyboards. The keys are noisy enough to be inappropriate in a location (such as a public library) where noise is an issue. Also, liquids spilled on the keyboard do not drain out, and remain in the keyboard with potential to cause a short circuit. The 42H1292 design and post-1993 1370477s and 1391401s, mostly made by Lexmark and Unicomp, include drainage channels to prevent this.

All Model M keyboards manufactured by either IBM or Lexmark feature an ID label on the underside indicating the assembly part number, individual serial number, and date the keyboard was manufactured. There are other more obvious ways to distinguish between the range, namely the type of badge featured on the top of the keyboard. The first model Ms (part numbers 1390120 or 1390131) featured a square aluminum IBM badge in the top right corner. Part number 1391401 featured an oval, white IBM logo with grey lettering in the top left of the board. The later IBM manufactured keyboards and subsequent Lexmark keyboards of the early 1990s (IBM assembly part numbers 1370477, 52G9658, 52G9700, 92G7453, 82G2383, 42H1292, and others) featured a similar oval badge to part number 1391401, but instead with a grey background and blue lettering.

Note: The manufacture dates are approximate. Click "Show" to display the uncollapsed table.