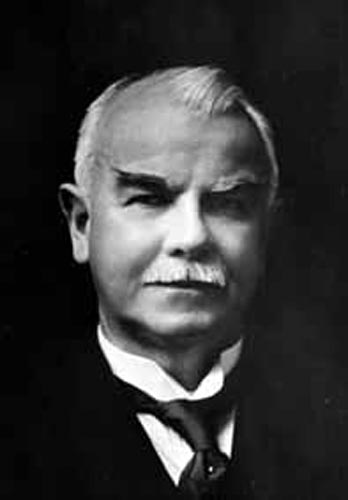 Sir James Alfred Ewing KCB ( - ) was a Scottish and , best known for his work on the magnetic properties of s and, in particular, for his discovery of, and coinage of the word, "".

(Note: According to the book "Sir Alfred Ewing: A Pioneer in Physics and Engineering" (1946) by Professor Bates, the discovery of magnetic hysteresis probably occurred before Ewing. However, Ewing re-discovered it, studied it in detail and coined the word "". Please see reference below.)

Born in , , the third son of a minister of the Free Church of Scotland and educated at West End Academy and the , Ewing showed an early interest in and .

Ewing graduated in from the where he studied under and . During his summer vacations, he worked on cable laying expeditions, including one to , under Thomson and .

In 1878, on Fleeming Jenkin's recommendation, Ewing was recruited to help the modernisation of as one of the "" (hired foreigners). Serving as professor of at the , he was instrumental in founding Japanese .

Ewing made two special friends at Tokyo University soon after arriving: and Lieutenant R.N. who taught navigation. He was also in close contact with and at the (Kobu Dai Gakko).

In Tokyo, Ewing taught courses in mechanics and on heat engines to engineering students, and electricity and magnetism to students of physics. He carried out many research projects on magnetism and coined the word 'hysteresis'. His investigations into earthquakes led him to help T. Lomar Gray and of the Imperial College of Engineering to develop a . All three men worked as a team on the invention and use of seismographs, though Milne is generally credited with the invention of the first modern horizontal-pendulum seismograph.

In 1883, Ewing returned to Scotland to work at the University College Dundee where he was appalled by the living conditions of many of the poorer areas of the town which he felt compared unfavourably with those in Japan. He worked fervently with local government and industry to improve amenities, in particular systems, and to lower the .

In 1890, he took up the post of professor of mechanism and applied mechanics at . At Cambridge, Ewing's research into the magnetisation of metals led him to criticise the conventional account of . In 1890, he observed that magnetisation lagged behind an applied . He described the characteristic hysteresis curve and speculated that individual molecules act as magnets, resisting changes in magnetising potential. Ewing was a close friend of Sir and collaborated with him on the development of the , participating in the sea-trials of the "". He also researched into the line structure of metals and, in 1903, was the first to propose that fatigue failures originated in microscopic defects or "slip bands" in materials.

In 1903, he became director of naval education at the before becoming principal and vice-chancellor of the in 1916, a post he held until his retirement in 1929. From 1914 to May 1917, he managed "", the admiralty intelligence department of , responsible predominantly for the decryption of intercepted German naval messages. In this capacity, he achieved some notoriety in the popular press when Room 40 deciphered the in 1917 (which suggested a German plot to assist in annexing the southwestern ).

In May 1916 Ewing accepted an invitation to become Vice-Chancellor of Edinburgh University, in the course of which he instituted an extensive series of effective reforms.

Knighted in 1911, Sir James Alfred Ewing retired from Edinburgh University in 1929 and died in 1935.