Den is the name of two identical planetary romance fictional characters created by Richard Corben. The first appeared in the 1968 animated short film Neverwhere. The second has been appearing in the medium of comics since 1973, and in short stories that have been collected for the most part in trade paperbacks. The second Den also appeared in the animated film Heavy Metal.

Corben created Den as the protagonist of a film short titled Neverwhere while working at Calvin Studios, an animation company in Kansas City.[1] The film is animated, with framing sequences filmed in live-action. Corben played the title character himself and his boss at Calvin played the boss in the movie. He drew the whole animated sequence by hand in his spare time. His employers, impressed by his work, helped him to finish it by editing it and adding a new professional soundtrack with actors' voices. It was submitted to film festivals and won several awards, including the CINE Golden Eagle Award.[2] The story continued in comic form from then on. Den made his comic debut in a short comic book story that appeared in Grim Wit No.2 in September 1973. Corben expanded this short story to two parts for publication in Métal Hurlant (1975–1976). He continued the story, turning it into a 12-part serial called "Den", for the first twelve issues of Heavy Metal magazine (1977–1978). He added an epilogue, "Den's Farewell", which was printed in issue No.13 (April 1978). The original story, without the epilogue, was published in the trade paperback Neverwhere (Ariel: Feb. 1978). All 13 chapters featured in the trade paperback Den: Neverwhere (Catalan: 1984).[3]

Corben returned to Heavy Metal with a 13-part Den sequel, which ran in issues No.54 through No.72 (1981–1983). These stories were collected in the trade paperback Den 2: Muvovum (Catalan: 1984), which appeared around the same time as the complete first edition, Den: Neverwhere.

Corben began self-publishing Den through his company Fantagor Press in the 1980s, beginning with Children of Fire (1987) which was later revealed to be the prequel to the Heavy Metal-era Den adventures. Corben followed this with an ongoing Den series, which did not have the full frontal nudity that was the hallmark of the original Heavy Metal strips. Corben went back to the adult content with Den Saga, which filled in some of the details between Children of Fire and Neverwhere and Muvovum. 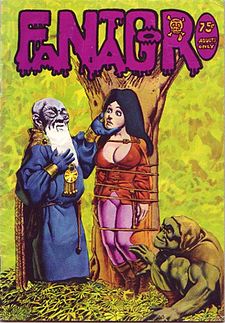 Fantagor #4 (1972), featuring the first appearance in print of what will become the Neverwhere world, Vermian (an exact double for the series villain Zeg) and Zomuk.

The short film Neverwhere (1968) was followed by short stories in the following publications:

They have been collected in the following Den trade paperbacks:

The first Den story, as told in the short film Neverwhere, is clearly inspired by the Edgar Rice Burroughs John Carter of Mars novels. In the beginning of the film, an office worker is shown reading the 1963 reprint of A Princess of Mars, before he is turned down for a date by a coworker and quits his job. He then builds a machine that opens a portal where a "deposed queen" beckons him to enter another world. Turning into a muscleman he fights several monsters, including four armed monsters reminiscent of Burroughs’ Green Martians. Den is then sent on a mission by the Queen to retrieve the Locnar and, after succeeding, returns home to his mundane life.

In its comic-book sequel, Den is a young man named David Ellis Norman. Following directions left for him on a note and a diagram from his missing uncle Dan, David builds another electronic apparatus. The apparatus opens a gateway to a fantasy world named "Neverwhere", where he was transformed into a hairless, nude, muscular, and prodigiously endowed adventurer. Confused by his strange trip, he can only remember the acronym of his real name (DEN), and begins calling himself "Den". In his Earth incarnation, David had found a letter in one of the fantasy novels by Edgar Rice Burroughs left to him by his uncle Dan. Some images from the Neverwhere film are recreated in the first volume of Den as flashbacks.

Shortly after his arrival he meets an evil nude masked woman, known as the Red Queen (perhaps a reference to the character in Through the Looking-Glass) who seems to know Den and is about to sacrifice her doppelgänger, Kath, to Uhluhtc. After being rescued by Den, Kath reveals to him that, on Earth, she is a frail novelist called Katherine Wells (a reference to H. G. Wells, whose second wife was named Catherine). Kath is a native of London who, in 1892, was drawn to Neverwhere when she found another doorway after following the will o' the wisp while wandering through some marshes. Like Den she was transformed when she arrived to Neverwhere, in her case into a voluptuous, large breasted nude woman who was immediately captured by the Red Queen (who had created the portal to bring her to Neverwhere). Kath has a much better recollection of her former life than Den, but no wish to return because she felt she was not only healthier but "more of a woman" in the new land. Like Den, she is completely nude and hairless except for her blond bob hairstyle.

According to Jan Strnad's introduction to Denz, "The saga of Den's exploits... lusty and brawling, brimming with magic, intrigue, horror and betrayal... spanned generations and filled many exotic volumes. Now in his declining years, Den lives in a NeverWhere far different from the one he entered. Thanks to his magical Locnar, Den has brought peace and prosperity to his adoptive world. Meanwhile, on Earth, Denzel Easton Norman seeks to follow in his brother's footsteps...."[4] 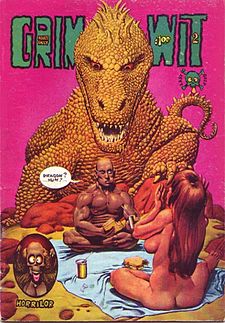 The stories of Den are shaped by several well-known works of fiction. Sometimes the references are featured in the story itself.

The identification of the main characters of the series is complicated because they often change their name,[10] drastically change morphologies,[11] have identical doubles (also both Dens have the same name),[12] and either forget, or do not acknowledge, previous encounters.[13] Most problematically they also radically change personalities and relationships between the chapters in the story. An extreme case is Kil, who is consecutively portrayed as a noble sexless warrior, a maternal caretaker of an embryo, a lustful lover, a deposed queen with magical powers, an evil witch who engages in human sacrifice, a ruthless tyrant who burns down a city, a fraudulent heroic adventurer, etc. According to Corben, this is due to Kil's psychotic schizophrenia.[14]

The protagonists are basically two identical men — Den (the first) and Den (the second) — and two identical women — Kil and Kath. They are all known by several other aliases:

The main secondary recurring characters are:

Chronology of the stories 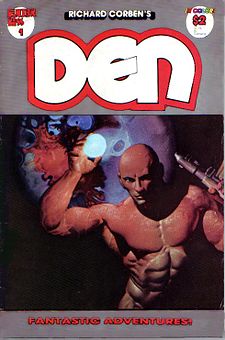 Den's adventures follow a complex and sometimes contradictory course of events. Some of the chapters of the story have been told in extended flashbacks, dreams, and visions. This is the order of the stories so far. There are three large gaps between the stories with adventures that have yet to be told. 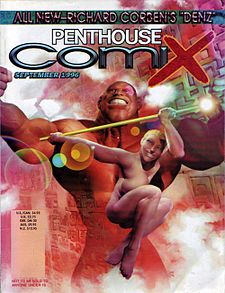 Penthouse Comix No.15 (1996). The latest chapter in the Den saga is a satirical series written by Jan Strnad. Cover art by creator Richard Corben.

Most critics have commented on the rather uneven and cliched plot of the story and its visual power. Scholar Maurice Horn remarked that Den 1 "sounds like a lot of hokum ... but it is saved by Corben's astonishing graphic mastery and the sweep of his composition."[27] Román Gubern considers that, "Den's brilliant experimentalism appeared tinted by a Neo-expressionist influence."[28] Tim Pilcher calls Den "Conan on Viagra".[29] Historian Paul Gravett thinks that "Corben's plotting may be erratic and prone to charges of sexism and cliché, but his total conviction and self-absorption in imagining this sensual dreamscape captivate and transport us there."[30]

D. Aviva Rothschild wrote about the first volume, "Although coherent and interesting, the story takes second place to Corben's lush, magnificent, fully painted, animation-quality art." Rothschild believes that the only problem with the book is "the ludicrously large breasts of the two women..." but considers that Neverwhere "belongs in all adult collections...."[33] Artist Bob Fingerman writes that, "Neverwhere is a timeless adult fantasy epic."[34] According to the Lambiek online comiclopedia, "With 'Den', Corben had found his ideal fantasy world. Corben returned again and again to it, and an end of 'Den' is not to be foreseen."[35]

The film Heavy Metal features a segment titled "Den" that adapts the first Den collection, Den 1: Neverwhere (not to be confused with the animated short of the same title). The film eliminates the Uncle Dan part of the story and incorporates a green meteorite as a portal to Neverwhere. Small details are changed (Kath is now from Gibraltar) and some characters and subplots are eliminated, but the segment follows the plot of the comic story fairly closely. The biggest difference is the tone: the animated segment is told in a self-referential, humorous style, different from the straight forward adventure tone of the comic. In fact, the segment is similar in tone to "Denz", which makes fun of many of the absurdities of the Neverwhere premise.

Den is voiced by comedic actor John Candy and, to highlight the humorous tone, the script has Den speaking both to characters and in contrasting voice overs — one in which he is dead serious and strong willed to match his epic existence on Neverwhere, the other sounding adolescent, reflecting his life on Earth. This adaptation has been compared in its idea to The Wizard of Oz by critic Chris Hicks, who says the story is, "about two children changed into fantasy adults with a 'bring-me-the-broomstick-of-the-wicked-witch'-style mission, etc."[7] Jack Stokes, the veteran animator of the film Yellow Submarine, was put in charge of the production.

A studio was set up in London because, according to Stokes "many animators are not good artists"[36] meaning they are not skilled in drawing the human figure realistically, and art students were recruited to pitch in on the production. This accounts for the lack of consistency in the characters' likenesses. Corben painted the poster for the movie and was asked to contribute to the production. He drew three character sheet turnarounds for Den and Kath, but these were not usable due to "inconsistencies in the construction".[36] Still, the animators tried to recreate the look of the comic by developing several techniques to reproduce the unusual colors of Corben's art.

The segment was well received, even by critics who did not think much of the film.[37] Critic Janet Maslin gave the film a positive review in The New York Times. She said, "The other highly memorable story is about a bookworm from earth who winds up on another planet, where his spindly body is transformed into that of an extraterrestial Hercules." She also complimented John Candy's vocal performance as Den.[38] Corben wrote about the film, "I was pleased with the Den segment of the Heavy Metal Movie. The drawings and movement seemed stiff, rough and unpolished, but the thrust and characters were right. I thought that John Candy did a great job with Den's voice."[39]