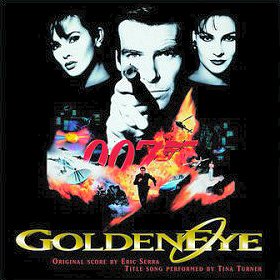 "GoldenEye" is the soundtrack to the 17th film of the same name and was composed by . It was released by on , . Serra composed and performed a number of synthesizer tracks, including the version of the James Bond Theme that plays during the gun barrel sequence, while John Altman and provided the more traditional symphonic music.

The theme song, "GoldenEye", was written by and of Irish rock band , and was performed by . The Swedish group were also involved at one point, producing a song also called "GoldenEye". This song was later released with slightly revised lyrics as on their 2002 album "Da Capo". In addition to the Bondian bass line, it seems that the lyric 'The Juvenile' simply replaced 'The Goldeneye'. The other lyrics, most notably the line "Tomorrow's foe is now a friend" obviously refer to the plot of this film.

The film features the song "" by . The song is sung in the film by , who was at that time not yet famous, in the scene in which Bond confronts Zukovsky. Intended to be a comic moment, Driver intentionally sings the song off-key in an exaggerated Russian accent.

Serra's score is often criticized by Bond fans, and is considered the farthest departure from a traditional Bond score in the series history. The producers later hired John Altman to provide the music for the tank chase in St. Petersburg. Serra's original track for that sequence can still be found on the soundtrack as "A Pleasant Drive In St. Petersburg". The incidental music for the film has thus far been the only collaboration on a James Bond film.

#"GoldenEye" –
#"The GoldenEye Overture: Half of Everything Is Luck/The Other Half Is Fate/For England, James"
#"Ladies First"
#"We Share the Same Passions: The Trip to Cuba/The Same Passions"
#"Little Surprise for You: Xenia/D.M. Mishkin"
#"The Severnaya Suite: Among the Dead/Out of Hell/The Husky Tribe"
#"Our Lady of Smolensk"
#"Whispering Statues: Whispers/Two Faced"
#"Run, Shoot, and Jump"
#"A Pleasant Drive in St. Petersburg"
#"Fatal Weakness"
#"That's What Keeps You Alone"
#"Dish out of Water: A Good Squeeze/The Antenna"
#"The Scale to Hell: Boris and the Lethal Pen/I Am Invincible"
#"For Ever, James"
#"The Experience of Love" –