The Sport of Kings

The Sport of Kings 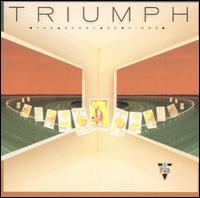 
The Sport of Kings is the eighth album by Canadian band Triumph, released in 1986.recorded at the bands home studio of from May to August 1986.

It is the second to last studio album to feature the band's guitarist and primary songwriter . The album is predominantly the work of outside writers, this being the only Triumph album on which the composers' credit on every track is given to other writers included, with no songwriting credits given to any other member of the band. played no keyboards in the recording of "The Sport Of Kings" having been sacked for three outside keyboardists who were hired to synthesize the sound of the album, meaning that this is the only Triumph album on which Levine is not featured on keyboards at all. Rik Emmett meanwhile sings lead vocals on six of the album's ten songs with vocals, four songs were sung by , while one track was sung as a duet by the two lead vocalists. The recording of "The Sport Of Kings" was marred by tension between Triumph and their then label of , particularly Emmett, who has since expressed his dislike for much of the album. Only three of album's songs has ever been performed live by Triumph, though one track was performed live by Emmett during his first three solo tours.