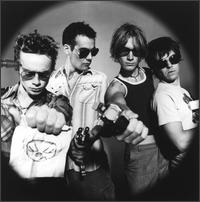 Spacehog is an English rock band from the 1990s and 2000s, heavily influenced by , Queen, and T. Rex. The group comprises Royston Langdon (bass and vocals), Antony Langdon ( and vocals), Richard Steel(guitar), and Jonny Cragg (drums).

Though all the band members hail originally from , , the band formed in in 1994 when Antony Langdon met Cragg by chance, in a where Cragg had a job killing . Soon after, Langdon's brother Royston joined the band, and Spacehog was born. Later when the band's original guitarist dropped out, Jonny Cragg called his friend Richard Steel to join the band. The band signed in 1994 with Seymour Stein to .

On , , Spacehog released their debut album, "". It went gold on the , selling over 500,000 copies and spawned the hit single and video "In the Meantime" as well as the single "Cruel to be Kind". "In the Meantime" received heavy video and radio play, and featured as background music to 's "" football programme. The band's second album, "", was released on , . Though it did not sell as well as "Resident Alien", the band's popularity continued to increase as Spacehog opened for popular acts like and . "The Chinese Album" featured a more "artsy" sound, with the -like piano on the opening track and of R.E.M. contributing vocals to the song "Almond Kisses".

After the band dropped , Spacehog signed with upstart label and released its third album, "", on , . The album continued the band's neo-glam approach and featured the singles "I Want To Live" and "At Least I Got Laid", as well as a ified version of 's "Also sprach Zarathustra". The band joined and Oasis on the in support of the album, which proved to be the band's final major tour outing.

Royston, Antony and Christian Langdon then pooled their resources to form . By June 2006, they had recorded eight songs with Bryce Goggin at Trout Studios in Brooklyn. Johnny Cragg, now sporting a moustache, joined The Twenty-Twos as their drummer post-Spacehog, but has since rejoined the Langdon brothers in Arckid.

At the end of November 2006 Antony Langdon left Arckid on good terms and has since devised an alter ego known as "Louis Arogant". This project is near completion as a record entitled "Victoria": an homage to Langdon's love for his wife, the director Victoria Clay de Mendoza. The album was expected for release toward the end of 2007.update after|2007|12|31 He also continues in the production of his television work. Also in the works is an album by Antony Langdon and Joaquin Phoenix. The project is called "This Lady is a Tramp" and is being mixed by Paul McKenna with help from Creation Records founder Alan McGee and the Charlatans’ Tim Burgess.

Antony Langdon was briefly replaced in Arckid by guitarist Mat Steel, who subsequently left Arckid after they shot their first video to rejoin Your Vegas.Pete Denton of Cube and Kid Symphony fame joined Arckid for a short period of time.Richard Steel accompanied the three members of Arckid on stage during the Hilfiger Sessions NY and the 2007 Lollapalooza gigs.

In 2008, Spacehog reunited to play two shows, the first at the and the second at Troubador. Drummer Jonny Cragg posted on the Arckid page that Spacehog will be reuniting and begin work on a new record.