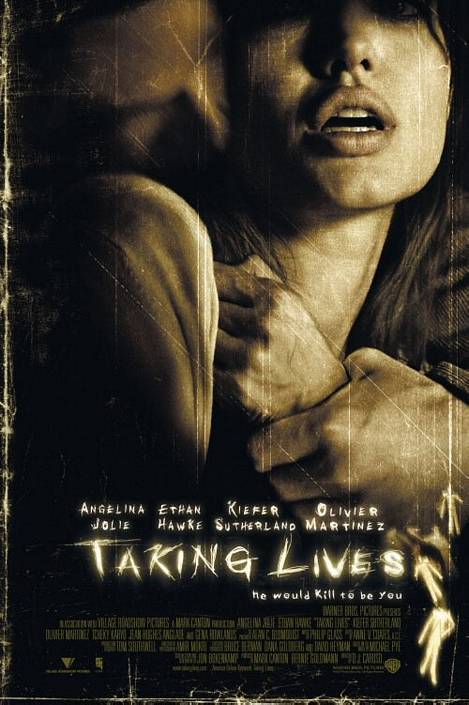 "Taking Lives" is a 2004 / with connections, starring and . The film was marketed with the tagline "He would kill to be you."

The film was based on the novel of the same title by Michael Pye. Numerous hands had a part in the screenplay as s. The cover page of the screenplay credits Jon Bokenkamp with the original draft, with subsequent revisions, with more revisions, and with the last revisions (to February 28, 2003). The ultimately awarded screenplay and adaptation credit to Bokenkamp alone.

A successful profiler, Illeana Scott (Jolie), is summoned to help out Canadian law enforcement in , to hunt down the Martin Asher, who assumes the lives and identities of the people he kills as he travels across . Asher has killed multiple men, assuming their identities for a few years before killing again and beginning a new life. Illeana has to adjust to working in a strange city with a police team that she does not really fit in with. Meanwhile, Mrs. Asher (Rowlands), Martin's mother, claims she has recently seen her son in Montreal and tells the police she truly believes Martin is evil.

The team meets with art salesman James Costa (Hawke), an eyewitness who saw Asher kill his last victim. James makes a drawing of Asher and within a couple of days, Asher is found. Illeana discovers Asher's next target is Costa, so protecting him is priority number one. During the time they spend together, Illeana and James begins to develop feelings for each other, though Illeana refuses to become involved with him because of the ongoing case.

After kidnapping Costa with Illeana in pursuit, Christopher Hart dies in a car accident and the case is closed. At this time, Illeana and James become romantically involved (even having sex) and Illeana finds herself really falling for James. However, when Mrs. Asher comes to identify the body of her son, the body turns out not to be her son's, and that Martin is still alive somewhere. A terrified Mrs. Asher flees the hospital morgue and into the elevator, but before Illeana can follow her in, the doors shut. When they finally open, Illeana sees James covered in blood, standing over Mrs. Asher's mutilated corpse, and realizes Costa is Asher, that Asher killed the actual Costa months ago. An investigation shows that Christopher Hart was an art thief who did business with Asher and was cheated by him. The Montreal police chase Asher, but he escapes in a train station and disappears, and approaches his next victim, a travelling sports talent scout. After that, he calls Illeana on the phone and makes fun of her. Consequently, Illeana is fired from the FBI.

Seven months later, Illeana is living in a desolate farmhouse by herself in rural Pennsylvania, clearly pregnant. It is revealed she is pregnant with Asher's twin boys. One day as she sits alone in her home, she discovers Asher has broken into her house. She frantically tries to escape, but Asher overpowers her, punching her and throwing her to the ground. Asher tells her he could live as a family with her, and a disgusted Illeana tells him she doesn't know who he is, that she is carrying 'James Costa's' babies. In fury, Asher begins choking her and eventually stabs her in the stomach with a pair of scissors. Illeana, seemingly unharmed by the stabbing, shocks Asher by stabbing him in the heart with the same pair. As Asher lies dying, Illeana removes a prosthetic pregnant belly, and tells him the past seven months have been a carefully planned trap. The film ends with Illeana calling the police, saying "It's over," and staring out her window. Asher is now finally dead.