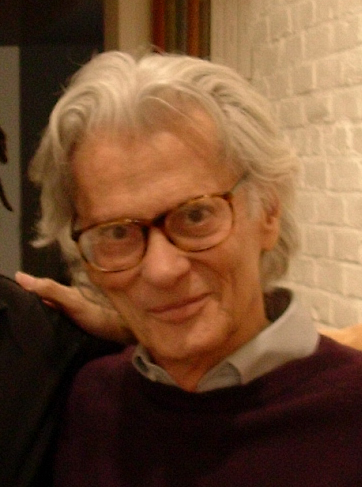 Richard Avedon (, &ndash; , ) was an American . Avedon capitalized on his early success in fashion photography and expanded into the realm of .

Avedon was born in to a family. After briefly attending , he started as a photographer for the in 1942, taking identification pictures of the crewmen with his flex camera given to him by his father as a going-away present. In 1944, he began working as an advertising photographer for a department store, but was quickly discovered by , the art director for the fashion magazine "". In 1946, Avedon had set up his own studio and began providing images for magazines including "Vogue" and "". He soon became the chief photographer for "Harper's Bazaar". Avedon did not conform to the standard technique of taking fashion photographs, where models stood emotionless and seemingly indifferent to the camera. Instead, Avedon showed models full of emotion, smiling, laughing, and, many times, in action.

In 1966, Avedon left "Harper's Bazaar" to work as a staff photographer for "Vogue" magazine. He proceeded to become the lead photographer of Vogue and photographed most of the covers from 1973 until became editor in chief in late 1988 [Vogue July 1973] [Vogue October 1988] . Notable among his fashion advertisement photograph series, are the recurring assignments for , starting from the spring/summer campaign 1980.

In addition to his continuing fashion work, Avedon began to branch out and photographed patients of mental hospitals, the in 1963, protesters of the Vietnam War, and the fall of the . During this period Avedon also created two famous sets of portraits of . The first, taken in mid to late 1967, became one of the first major rock poster series, and consisted of five striking psychedelic portraits of the group &mdash; four heavily solarised individual colour portraits (solarisation of prints by his assistant, Gideon Lewin, retouching by Bob Bishop) and a black-and-white group portrait taken with a Rolleiflex camera and a normal Planar lens. The next year he photographed the much more restrained portraits that were included with "" in 1968. Among the many other rock bands photographed by Avedon, in 1973 he shot with all the members exposing their bellybuttons for recording, .

Avedon was always interested in how portraiture captures the personality and soul of its subject. As his reputation as a photographer became widely known, he brought in many famous faces to his studio and photographed them with a large-format 8x10 . His portraits are easily distinguished by their minimalist style, where the person is looking squarely in the camera, posed in front of a sheer white background. Avedon would at times provoke reactions from his portrait subjects by guiding them into uncomfortable areas of discussion or asking them psychologically probing questions. Through these means he would produce images revealing aspects of his subject's character and personality that were not typically captured by others. [PBS American Masters, "Richard Avedon: Darkness and Light", Directed by Helen Whitney, 1995]

He is also distinguished by his large prints, sometimes measuring over three feet in height. His large-format portrait work of drifters, miners, cowboys and others from the western United States became a best-selling book and traveling exhibit entitled "In the American West", and is regarded as an important hallmark in 20th Century portrait photography, and by some as Avedon's "". Commissioned by the in Fort Worth, Texas, it was a six-year project Avedon embarked on in 1979, that produced 125 portraits of people in the American west who caught Avedon's eye.

Avedon was drawn to working people such as miners and oil field workers in their soiled work clothes, unemployed drifters, and teenagers growing up in the West circa 1979-84. When first published and exhibited, "In the American West" was criticized for showing what some considered to be a disparaging view of America. Avedon was also lauded for treating his subjects with the attention and dignity usually reserved for the politically powerful and celebrities. Laura Wilson served as Avedon's assistant during the creation of "In the American West" and in 2003 published a photo book documenting the experiences, "Avedon at Work, In the American West."

In 1944, Avedon married Dorcas Nowell, who later became a model and was known professionally as Doe Avedon. Nowell and Avedon divorced after five years of marriage. In 1951, he married Evelyn Franklin; their marriage produced one son, John. Avedon and Franklin also later divorced.

star is the nephew of Richard Avedon.

On , , he died of a brain hemorrhage in while shooting an assignment for "". At the time of his death, Avedon was working on a new project titled "On Democracy" to focus on the run-up to the .

presented a fictional account of his early career in the 1957 musical "", starring as the fashion photographer "Dick Avery." Avedon supplied some of the still photographs used in the production, including its most famous single

's face in which only her famous features - her eyes, her eyebrows, and her mouth - are visible.

Hepburn was Avedon's muse in the 1950s and 60s, going as far to say "I am, and forever will be, devastated by the gift of Audrey Hepburn before my camera. I cannot lift her to greater heights. She is already there. I can only record. I cannot interpret her. There is no going further than who she is. She has achieved in herself her ultimate portrait." [Karney,Robyn. "A Star Danced: The Life of Audrey Hepburn," Bloomsbury. London: 1993]

*"Observations", 1959. A collaborative book with containing portraits of many famous people of the twentieth century, including , , and .
*"Nothing Personal", 1964. A collaborative book with James Baldwin.
*"Alice in Wonderland", 1973, co-authored with .
*"Portraits", 1976
*"Portraits 1947-1977", 1978
*"In the American West", 1985
*"An Autobiography", 1993. Contains 50 years of images arranged to tell Avedon's life story. Photos include celebrities such as , , , and Avedon's parents.
*"Evidence", 1994. More than 600 images encompassing Avedon's fashion photographs, portraiture, journalistic shots, sketches, snapshots, and contact sheets. However, despite containing many images, the book focuses more on the essays and text about Avedon instead of being fully based on visuals.
*"The Sixties", 1999, co-authored with Doon Arbus. Contains images of many famous figures such as , , and .
*"Made in France", 2001. A retrospective of Avedon's fashion portraiture from the 1950s. The book is expensive due to the images being printed on tritone plates.
*"Richard Avedon Portraits"' 2002. 50 black and white images of celebrities and subjects from his "In The American West" project. Its release coincided with an exhibition of the work at the .
*"Woman in the Mirror". 2005, with an essay by Anne Hollander.
*"Performance". 2008, with an essay by .
*"Portraits of Power". 2008, edited by Paul Roth with an essay by . Coincides with an exhibition of political work at the in Washington DC.

* In "" episode "" (Episode 19 of Season 13) Homer states that he bought an issue of "" (in which Apu's cartoon appeared) only for Richard Avedon's pictures of Lenny, two of which we see afterwards.
* The film "Capote" features a depiction of Avedon's collaboration with and recreations of his photographs of "In Cold Blood" murderers and .
* An Avedon-style photo of actor , in imitation of Avedon's "American West" photo of a man holding a disemboweled snake, was used in a prop for the film ""; Wilson's mother Laura Wilson was a close assistant to Avedon.
* Avedon is mentioned in the song "Gardenia" by Stephen Malkmus and The Jicks.