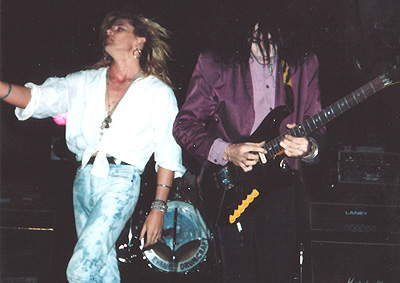 
The Candy Harlots were a band formed in , in (see ). The group was infamous for its suggestive lyrics, explosive stage act and at one time were dubbed 'Sydney's biggest live secret!'fact|date=August 2008.

The band was formed in by vocalist Mark Easton who had previously been a member of Soggy Porridge, The Glam Savages, Kelpies and Suicide Squad. After a couple of early bass player changes (former Glam Savages member Nick Szentkuti spent six months in the role, followed by Scott Millard), the best known line-up from 1988-1990 consisted of Easton, his ex-Soggy Porridge drummer Tony Cardinal, 17 year old Marc De Hugar on lead guitar (Though De Hugar was 16 when Easton asked him to join), ex-Glam Savages guitarist Ron Barrett and Leeno Dee on bass (ex-Roxx). During their early days, the band developed a huge underground following around Sydney. The band were offered a recording deal with after only three shows, but their manager turned the offer down. The contract was never signed until the band had got out of their management deal four years later. The Candy Harlots secured support slots with , , , The Angels, Sunnyboys, Danish rock band D-A-D and Kings of the Sun along the way. They played in many suburban Sydney pubs, but their main venues were the Kardomah Cafe in Kings Cross, and the St James Tavern in the city.

Their popularity was massive, but their reputation made signing a major label contract difficult. It was Melbourne label who issued their debut 7" single, "Red Hot Rocket", in April, 1989. Initial copies of the record were pressed on red vinyl and came wrapped in a pair of women's Candy Harlots knickers. The single (produced by Mick Cocks from ) sold out in minutes and leapt to the top of the local charts. They did an in-store appearance at Galleon Records in Fairfield, followed by a whirlwind tour of Melbourne in mid-1989. This included a Friday night show at the Barwon Club in Geelong, an in-store appearance at the Virgin Megastore in Bourke Street, then playing to a packed Saturday night crowd at the Corner Hotel in Richmond.fact|date=August 2008

The band's abundance of live shows continued and they became one of the most prominent bands on the Sydney live scene. The band's follow-up single was "Danger" backed with "Wrap 2 Arms" which was released in 1990 on the Sydney label Timberyard. A friendship between New Jersey's and the Candy Harlots was struck after Skid Row's Hordern Pavilion show in 1990. Both bands jammed on The Troggs' "Wild Thing" at an after show party at the Kardomah Cafe, with members of (touring at the time) also in attendance.

Lead guitarist Marc De Hugar was replaced in 1990 by Phil Bowley (ex-Rags n Riches). Tragedy struck not long after, when in October 1990 original rhythm guitarist Ron Barrett passed away at the age of 26. Ex-Flying Tigers member Peter Masi was recruited in Barrett's place. After a lengthy career, Easton retired and his final performance with The Candy Harlots was at the Kardomah Cafe on .

New vocalist came via a band called Backstreet Shuffle. Lynch's songwriting skills helped the Harlots get signed to a major label () after "What Are We Fighting For?" was played to representatives and won then over. The line-up achieved far greater media attention than the late 80s Easton fronted line-up.

The line-up changes that the Candy Harlots had gone through, combined with their major record label deal, formed a new identity for the group. Nevertheless, they still proved popular with the Australian hard rock and metal fraternity, gaining many new fans via the Virgin-backed promotion; but alienating many early fans in the process.

They released their debut album "Five Wicked Ways" in 1992. Virgin Records was eventually bought out by and the band were then signed to EMI's US label. was fired from the band and was replaced by Hayden Watt; now the third Candy Harlots vocalist. Founding drummer Tony Cardinal quit the group along with Peter Masi. However Watt, Bowley and Dee formed a new outfit called Helter Skelter (with the addition of drummer Tubby Wadsworth (ex-Kings Cross). They released one single: "Cry For Love", an cover, before Watt was replaced by Jordan Howe. Now known simply as The Harlots, the band issued a self-titled CD in October of 1994 before dissolving the following year.

* Mark Easton continues to perform and record with his blues-rock outfit Mark Easton Limousine. They have produced three releases: "Coast To Coast", "Greener", and "Bandwagon" released in September 2006. In October 2003 he performed a reunion gig with his former band The Kelpies at The Annandale Hotel in Sydney.
* Tony Cardinal joined in the mid-90s.
* Leeno Dee played with Phil Bowley in Velvet Claws, The Killer Kowboys and Dearly Beloved - who released an EP "Pushover" in February 1997. He achieved further success most recently as a member of Jerk and now plays in the band INK. [http://www.myspace.com/inknet]
* Marc De Hugar [http://www.myspace.com/marcdehugar] joined in the mid-90s alongside Tony Cardinal. His glam rock-influenced band Dragonfly produced only one EP release, "Zero", released August 2006(MGM) [http://www.myspace.com/dragonflyzeromusic] . Marc continues to perform, teach, do AMAC clinics for Charvel USA, and spotlights in various other projects, although he is also in the process of recording a solo CD guest featuring surprise musicians and singers dubbed "Evolution X". [http://www.myspace.com/rockzillaraziel]
* Peter Masi played with the Angry Anderson/Peter Wells Band, Mark Easton Limousine and is currently in Beware of The Dog with former Harlots vocalist Jordan Howe.
* formed the short-lived Angry Snuff Puppett, after his time in the Candy Harlots. In early 2005 he was listed to appear at a Tsunami Benefit show in . He is currently fronting his band of 6 years, Ugly little Secrets.
* Nick Szentkuti, original bass player, is performing as a singer/guitarist. [http://www.myspace.com/szentkuti]