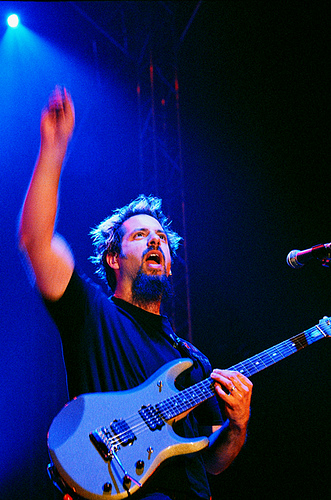 John Peter Petrucci (born , ) is an American best known as a founding member of the band . He has produced (along with his bandmate ) all Dream Theater albums since their 1999 release, "". Petrucci was named as the third player on the six times, more than any other invited guitarist. GuitarOne ranked him as the 9th Greatest Shredder of All Time.

Petrucci first played guitar at the age of eight when he noticed his sister (who was taking organ lessons at the time) was allowed to stay up past her bed time to practice. He soon dropped it when his plan failed. At age 12, he began playing again when he was invited into the band of his friend , who would later become the first keyboardist of . Petrucci began to practice in earnest whilst exercising physically. He was a largely self-taught guitarist who developed his skills through attempts to match the skill of his idols, who included , Steve Howe, , , , and . He has jokingly referred to his guitar idols as "the Steves and the Als".

Petrucci attended in Boston with childhood friend (bass), where they met future bandmate (drums). These three in addition to another childhood friend of Petrucci and Myung, (Keyboards), formed the band Majesty, which would later become Dream Theater.

While Dream Theater is what Petrucci is most commonly associated with, he is also a part of the project band and has appeared as a guest on several records by other artists such as the album by the Explorer's Club.

In 2001 he was invited by and to tour with them on the popular G3 guitar tour, which exposed him to a massive number of new fans and inspired him to record a solo album. "Suspended Animation" was released on , , and made available for order from his web site. He also appeared on the 2005, 2006 and 2007 G3 tours.

Petrucci also wrote and recorded two instrumental soundtrack songs for a game titled . Each track is roughly two minutes long and they are simply titled "Prologue" and "Epilogue". Petrucci is an avid gamer, and has revealed in interviews that he never tours without one. Fact|date=September 2008

Dream Theater bandmate Jordan Rudess revealed in an interview that Petrucci is a practicing .

He is a voting member of NARAS.

Petrucci is respected for his variety of guitar styles and skills. One of the most notable of these is his high speed alternate picking which, as he himself claims, requires a "strong sense of synchronization between the two [playing] hands." [Total Guitar Magazine UK, December 2007 p.45] He has performed alongside and on their annual G3 tour 6 times. Guitar magazines and fans worldwide consistently vote Petrucci as one of the world's finest guitar players. [ [http://www.ernieball.com/mmonline/artists/ MusicMan Artists ] ] He has been labeled as a on some fansites and webzines, including Sputnikmusic [ [http://www.sputnikmusic.com/band/John+Petrucci John Petrucci reviews, music, news - sputnikmusic ] ] , and TheFunkyGibbons