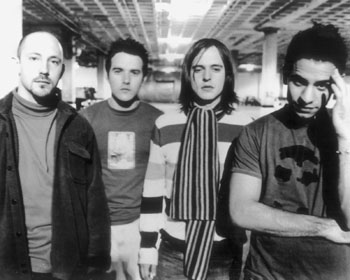 Zurdok was a Mexican rock band based in . It was formed in 1993 under the name Zurdok Movimento, changing it several years later to simply Zurdok. It was one of the most important bands in the Mexican rock band scene at the end of the 1990s and the early 2000s.

The band recorded 3 studio albums that got success into the "rock en español" critics and audiences. Fernando Martz Lead Singer left the band in 1999 and Chetes remained as the main vocalist. They got into hiatus in 2002, when finally decided then to finish the band. In 2006, Chetes released his solo career and Martz did a reunion of Zurdok along David Izquierdo.

"Fletch" Sáenz and David Izquierdo were friends from elementary school who in 1993 decided to form a band. joined as bassist and introduced them to Gerardo Garza (better known as ). On , the band met for the first time with the simple intention to make music, creating songs for themselves and not much of anything else.

After months writing and experimenting they decided to recruit a vocalist, one that with a powerful voice able to shout over the heavy sound which was a part of all their songs at the time. It was because of a recommendation from (current member) that Fernando Martz joined Zurdok. Later, keyboardist Gustavo Mauricio was brought in, and the Zurdok Movimento project was taken more seriously.

The group continued composing and made its live debut on , in their hometown of Monterrey. Just a short time later, the name "Zurdok Movimento" became familiar around the city and the band began to receive more exposure. It wasn't until 1995 when the band's name was made known beyond Monterrey, winning what was then the most important rock-contest in Mexico: "the Battle of the Bands", competing against more than 400 groups from all over the country and thus becoming the first non-Mexico City group to earn this prestigious award.

Eventually, the name of Zurdok Movimento began to make the rounds and had a buzz going within the different transnational label companies. It helped that the executives of the companies started to care about the music of the north of Mexico and signing to Zurdok Movimento with Discos Manicomio, then a subdivision of .

In January 1997 Zurdok Movimento went to Los Angeles to record its first album with producer (which already had worked with , and the well-known Monterrey group ). In August 1997 the Antena album was released, widening the group's exposure in several parts of the country and with Chetes established as vocalist, they became a group with 2 lead vocals. "Tropecé" was the first single to come off this album, which was followed with "Si me hablas al revés", "Gallito Inglés" and "No Importa".

The band had plenty of learning experiences during the recording and promotion of Antena, and with a name change (now simply called "Zurdok"), they felt ready to record their second album. In November 1998, the recording of "" began, working on almost all tracks with producer . Most of the recording took place in a mansion on the outskirts of Monterrey, which Zurdok set up as recording studio. The group decided on a sound influenced by such bands as Oasis and .

This album's first single, "Abre los ojos", got the attention of Monterrey music critics, calling it "one of the best songs that Monterrey rock has produced". David Ruiz, aka "Leche" directed the video for the same song.

After promoting the first single, PEater Reardon decided to take Fernando Martz to LA for new projects as he saw his talent, Fer Martz left the band. Two years later, he announced that he decided to start a solo project in Los Angeles, called Envértigo. Zurdok became a quintet.

After Martz's departure, Zurdok moved on, with the radio success of "Si me adverti" Written and Composed By Fernando Martz, the melodic "Cuántos Pasos", and the hypnotic "Luna". With this last song, Zurdok closed the cycle of "Hombre Sintetizador", and continued on. This album consolidated the band's status as it was called "one of best rock albums in Spanish". Zurdok gained fans throughout the continent, including the United States. They went on tour during 1999 and 2000.

After the success of the "Hombre Sintetizador", Zurdok returned to the recording studio to make what would be their most ambitious project. The band flew to L.A in August 2000 to meet with producer and record their third album: "" which was recorded in the famous studios in L.A. as well as in Reardon's own studio.

After the recording, Zurdok lost yet another member. Gustavo Maurizio "Catsup" decided to leave the band to dedicate himself to making videos and to begin logistical planning for a movie. After the exit of Catsup, Zurdok regrouped and put everything in order for the release of their third album, "". They decided to only send out pre-singles made available only on over the Internet, the firt was "Asi Es". Later, they chose "Estatico" as their first actual radio single, simultaneously releasing it with a video. After "Estatico," it was "Para Siempre".

After opening for British band Placebo, the group decided to go on hiatus in 2002, as its contract with was up. Nevertheless, just a short time later, the group announced that the hiatus would be definite due to "artistic differences" between the members of the group, effectively ending Zurdok.

Fernando Martz and David Izquierdo decided to revive Zurdok's old glories by re-grouping in 2006. They made a pair of appearances recruiting Daniel Plascencia, Charly Pornet and Roger Bristle (the last two members of Jumbo) for the new lineup. It is notable that, during these new appearances, they performed songs of the first two Zurdok records (the ones on which Martz was present). After a good response from the audience at the 2006 festival, they performed in their home town of Monterrey on , at the well-known Cafe Iguana, for a sold-out crowd while hundreds of people remained outside unable to get in.

As a result of this, the Chetes-Terracina band also started performing the song "Si me advertí". Chetes decided to do the same as a solo artist, playing four Zurdok songs at his concert at the Metropolitan Theater. Months later, David Izquierto wrote a letter to the unofficial site "Hombre Sintetizador", saying that "the reunited band coudn't play any more concerts or record an album because Martz moved to another country".

In 2005, Chetes and Terracina formed a Project called Vaquero. Their first single was "Dying to Live", which was a minor hit in the music charts at Mexico. The project is now in hiatus and it's unknown if they will release a followup album.

Chetes released his debut album as a solo artist in 2006: "Blanco Fácil" (Easy Target), which was produced by ex- . It has a softer sound than that of Zurdok, and did quite will on the pop and rock charts. His second album is called "Efecto Dominó".

In that same year, David Izquierdo started a project with (singer of Elfonia) called "Dalai". [http://www.geocities.com/zurdokmexico/] . Mauricio Terracina started his own band called "the Volture" and Gustavo Mauricio is now part of the band .

In 2007 Universal Music released a compilation of Zurdok's greatest hits, including a DVD with all their videos and some interviews.