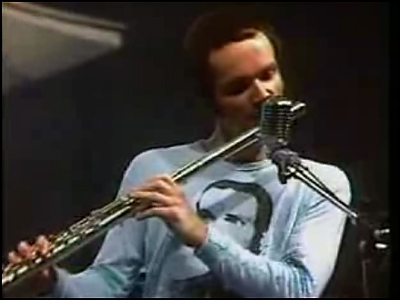 Florian Schneider-Esleben (born , in , ) is one of the founding members of band .

Schneider founded Kraftwerk with in 1970, the two having met in 1968, studying firstly at the Academy of Arts in Remscheid, then at the [http://www.rsh-duesseldorf.de/en/hochschule/geschichte.php| Robert Schumann Academy] in Düsseldorf, and played together in the improvising ensemble Organisation. Prior to meeting up with Hütter, Schneider played with Eberhard Kranemann in the group Pissoff from 1967-68. [ [http://www.e-kranemann.de/kraftw1/start.htm e-kranemann.de] ] Kranemann would later join Kraftwerk as a bass guitar player, although his time with the group was short lived.

Originally his main instrument was the , which he would treat using a diverse manner of electronic effects, including tape echo, , use of pitch-to-voltage converter, fuzz and , allowing him to use his flute as a bass instrument. He also played (similarly treated) and made use of s (both as a melodic instrument and as a sound processor). Later he also created his own electronic flute instrument. After the release of their 1974 album, "Autobahn" his use of acoustic instruments diminished.

titled his "" instrumental track "" after Schneider,

Schneider, speaking in 1991, said: "I had studied seriously up to a certain level, then I found it boring; I looked for other things, I found that the flute was too limiting... Soon I bought a microphone, then loudspeakers, then an echo, then a synthesizer. Much later I threw the flute away; it was a sort of process." [Pascal Bussy (1993). "Man, Machine and Music"] Although he has limited keyboard technique, and is a trained flautist, he apparently preferred to trigger the synth sounds through a keyboard in the group's 1975, 1976 and 1981 concerts (later, developments in sequencing limited the need for hands-on playing).

Schneider's approach appears to be concentrated on sound design (in an [http://kraftwerk.technopop.com.br/interview_115.php interview in 2005] , Hütter called him a "sound fetishist") and vocoding/speech-synthesis. One patented implementation of the latter was christened the , a distinctive feature of the Kraftwerk sound.

He is known as the static, more secretive half of the elusive duo, apparently disliking touring.

:Cquote|That’s another rumour. He is a sound perfectionist, so, if the sound isn’t up to a certain standard, he doesn’t want to do it. With electronic music there’s no necessity ever to leave the studio. You could keep making records and sending them out. Why put so much energy into travel, spending time in airports, in waiting halls, in backstage areas, being like an animal, just for two hours of a concert? But now, with the Kling Klang studio on tour with us, we work in the afternoon, we do soundchecks, we compose, we put down new ideas and computer graphics. There’s always so much to do, and we do make progress.::— [ "Mojo" magazine interview, August 2005]

Schneider has not performed on any of the dates of the Kraftwerk 2008 tour; it is not officially known why he opted out of the gigs.
His position onstage was filled by Stefan Pfaffe, a associate working for the band as a video technician.Fact|date=April 2008

Schneider currently lives in -Büderich near , and has a daughter named Lisa. He is the son of architect Paul Schneider-Esleben.