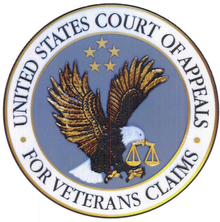 Seal of the U.S. Court of Appeals for Veterans Claims

The United States Court of Appeals for Veterans Claims is a federal court of record that was established under Article I of the United States Constitution. The court has exclusive national jurisdiction to provide independent, federal, judicial oversight and review of final decisions of the Board of Veterans' Appeals (Board).[1]

The U.S. Court of Appeals for Veterans Claims was created on November 18, 1988, by the Veterans' Judicial Review Act of 1988.[7] [8] [9] Prior to the establishment of the U.S. Court of Appeals for Veterans Claims, from the U.S. Revolutionary War to 1988, there was no judicial recourse for veterans who were denied benefits.[10] The United States Department of Veterans Affairs, formerly titled the Veterans Administration, was the only federal administrative agency that operated without independent judicial oversight.[11] The Board of Veterans' Appeals, which is a part of the Department of Veterans Affairs, provided the final decision in a veteran's claim for benefits.

Veterans, advocacy groups, and veterans service organizations fought and urged Congress to provide judicial review of VA decisions since the 1950s. The lack of judicial review persisted, however, until the increase in veterans claims following the Vietnam War. The struggles of these veterans to obtain VA benefits highlighted the lack of independent oversight in the adjudication process. The House Committee on Veterans' Affairs initially resisted, noting that the Department of Veterans Affairs stood in "splendid isolation as the single federal administrative agency whose major functions were explicitly insulated from judicial review."[12]

Judges to the U.S. Court of Appeals for Veterans Claims are appointed by the President of the United States and confirmed by the United States Senate, the same as Article III Judges.[19] The Judges are appointed to serve fifteen year appointments. Retired Judges are routinely recalled to active service to assist the Court in issuing its decisions in a timely manner. The seven active judges are: