Natal chart
Not to be confused with Conception chart. 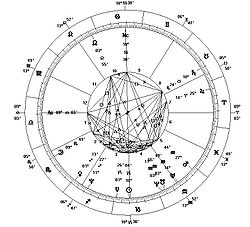 In astrology, a natal chart is a stylized map of the universe with the "native" (the individual or subject to be studied) at the center. It is calculated for the exact time and location of the native's birth for the purposes of gaining insight into the native's personality and potential. Commonly used alternative names for the natal chart include birth chart, horoscope, natus, nativity, radix, geniture and genethliac chart, among others. The chart shows the positions of the sun, moon, planets, and potentially other celestial objects, all referred to as the native's "planets," within the frames of references defined by the astrological signs and houses.

The accurate birth time (generally agreed upon as the first breath or intake of air)[1] and location are necessary for the calculation of the exact degree of the signs that are rising, setting, culminating up, and culminating down, known respectively the ascendant (or "rising sign"), descendant, medium coeli (or "midheaven"), and imum coeli (or "lower midheaven"). These degrees, also known as the angles, are essential for mapping the positions of the native's twelve houses. 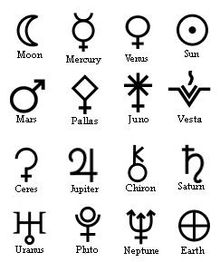 The picture to the above-right is a modern example of a natal chart as a modern Western astrologer would most likely view it (though there are variants depending on the specific astrological tradition that the astrologer follows and/or their personal preferences). The design, along with the symbols/glyphs used in the chart, can vary widely; some choose to include the Zodiac wheel, while some do not. Also, charts do not have to be round—following the Hellenistic/Roman, medieval and/or Vedic styles, they can be square as well.

The astrological aspects (such as conjunctions or oppositions, among others) are delineated in the center of the chart. The twelve signs of the Zodiac are located at the outer portion of the chart wheel; similarly, twelve segments of arc form astrological houses which are said to have significance for different areas of life. There are many different systems for calculating the houses. The sample chart uses a quadrant house system of house division whereby the angles of the chart divide the chart into four quadrants with three houses within each quadrant, and in which the houses usually include portions of more than one astrological sign. Each quadrant has an angular house, which includes one of the angles of the chart; a succedent house follows this, with a cadent house at the end of the quadrant.

Place and time of birth

Because the Sun, Moon, planets, and primary angles in the sky are constantly in motion relative to the earth, as each second passes the natal chart/astrological chart is changing (albeit slowly) and a new chart is created for every moment at each location. A natal chart is extremely personal and unique, depending on the specific date, exact time, and precise location of the birth. Even the birth charts of a pair of twins are often slightly different due to the fact that one of the twins is usually born a few minutes apart from the other (see also: astro-twin).

The time of birth can usually be found on the birth certificate in many countries. In some instances, however, the birth times are rounded off by the nurse or doctor that is present to the nearest half or quarter-hour, thus rendering the time only approximately correct. Because of this fairly common practice, the parents should always remember to note the exact time of the child's first breath and not rely on the time given on the birth certificate in the event that they ever plan on having a precisely accurate natal chart calculated for their child. An accurate time of birth is virtually useless if the exact location of birth is not known.

Most charts are geocentric, that is based on the Earth. However, there is no reason in theory why a chart cannot be created for another planet. Some astrologers use Heliocentric - Sun centered - charts. These are theoretical constructions and have a different interpretation to geocentric natal charts. Charts based on other planets would need all the points recalculating from that point of view; for example, "Jovocentric" would be a Jupiter centered view.

Once the astrologer has ascertained the exact time and place of the subject's birth, the local standard time (adjusting for any daylight saving time or war time) is then converted into Greenwich Mean Time or Universal Time at that same instant. The astrologer then has to convert this into the local sidereal time at birth in order to be able to calculate the ascendant and midheaven. The astrologer will next consult a set of tables called an ephemeris, which lists the location of the sun, moon and planets for a particular year, date and sidereal time, with respect to the northern hemisphere vernal equinox or the fixed stars (depending on which astrological system is being used). The astrologer then adds or subtracts the difference between the longitude of Greenwich and the longitude of the place in question to determine the true local mean time (LMT) at the place of birth to show where planets would be visible above the horizon at the precise time and place in question. Planets hidden from view beneath the earth are also shown in the horoscope. 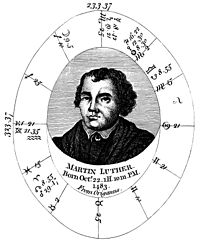 The horoscope is then divided into 12 sectors around the circle of the ecliptic, starting from the eastern horizon with the ascendant or rising sign. These 12 sectors are called the houses and numerous systems for calculating these divisions exist. Tables of houses have been published since the 19th Century to make this otherwise demanding task easier.

Placements of the planets

Having established the relative positions of the signs in the houses, the astrologer positions the sun, moon, and planets at their rightful celestial longitudes. Some astrologers also take note of minor planetary bodies, fixed stars, asteroids (for example, Chiron) and other mathematically calculated points and angles such as the vertex, equatorial ascendant, etc. Many astrologers also use what are commonly referred to as Arabic parts (or Greek Lots), the most common of which is the Part of Fortune (Pars Fortuna).

To complete the horoscope the astrologer will consider the aspects or relative angles between pairs of planets. Certain aspects are considered more important than others. Those generally recognized by the astrological community are Conjunction (0°), Opposition (180°), Square (90°), Trine (120°), Sextile (60°), Semi-Square (45°), Sesquisquare (135°), and Quincunx (150°). Understandably these aspects are more significant when they are exact, but they are considered to function within an orb of influence, the size of which varies according to the importance of each aspect. Thus conjunctions are believed to operate with a larger orb than sextiles. Most modern astrologers use an orb of 8° or less for aspects involving the Sun, Moon, and Jupiter and smaller orbs for the other points. Some astrologers, such as practitioners of Cosmobiology, and Uranian astrology, use minor aspects (15°, 22.5°, 67.5°, 72°, 75°, 105°, 112.5°).

If the birth time cannot be obtained, or is not precise, some astrologers try to find it by rectification. This is usually done by making a list of important events in the person's life, and calculating what birth time would give the most appropriate progressions and/or transits for these dates. Another method, often combined with the former, is to decide what birth time would give a chart that seems to describe the person most accurately - especially as regards physical appearance. Not all astrologers approve of rectification, however.

Once the natal chart has been constructed the process of interpretation can begin. This is a branch of astrology known as natal astrology , which involves building a complete picture of the personality of the subject, or native. Interpretation involves two main steps - chart weighting and chart shaping. Chart weighting involves noting the distribution of zodiac signs and houses in the chart, and the significance of this to the overall personality of the native. Signs are assessed by element (Fire, Earth, Air, and Water) and by quality (Cardinal, Fixed and Mutable). Houses are assessed by the significance of Angular, Succedent and Cadent houses.

Chart shaping involves assessing the placement of the planets by aspect and position in the chart, and noting any significant patterns which occur between them. This involves noting significant aspect patterns (or groups of aspects), which may appear in the chart and any other patterns , such as Jones patterns.

The solar chart is a natal chart erected when the date of birth is known, but not the time of day.[2] The position of the sun at midnight or noon is taken as the time of birth, and the position of the sun, moon and planets plotted in the chart for that time. This leads to a fairly accurate picture of their position (with the exception of the moon) , as most of the planets do not move much in the course of one day. The aspects between each of the planets (except the moon) can therefore be plotted with a high degree of confidence. The sun's position is taken as the ascendant of the chart and equal sized houses of 30 degrees each are used; or alternatively, the sunrise chart can be used, with the sun's position at sunrise at the latitude in question taken as the ascendant.[3]

Although the solar chart is deficient in that it cannot show the ascendant, midheaven or the houses with any accuracy, it can neverthelss provide a fairly accurate profile of a person's character from examining the position of the planets alone.