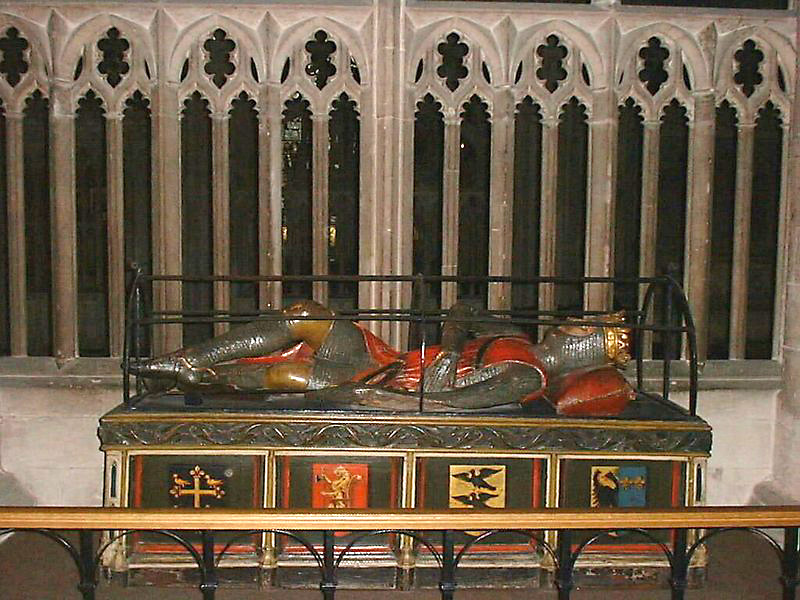 Robert Curthose or Robert II (c. 1051 or 1054&ndash;10 February 1134) was the from 1087 until 1106 and an unsuccessful claimant to the throne of the . His nickname, Curthose, comes from the "Courtheuse", meaning short stockings (or in English - curt [short] & hose [stockings] ), as it is sometimes translated, Shortstockings. and report that Robert's father, King William, called him "brevis-ocrea" (short-boot) in derision.

He was the eldest son of William the Conqueror, the first Norman , and , and a participant in the . His reign as Duke is noted for the discord with his brothers in England, eventually leading to the absorption of as a possession of England.

His birthdate is usually given as 1054, but may have been 1051. As a child he was betrothed to Margaret, the heiress of Maine, but she died before they could be wed, and Robert didn't marry until his late forties. In his youth, he was reported to be courageous and skillful in military exercises. He was, however, also prone to a laziness and weakness of character that discontented nobles and the King of France exploited to stir discord with his father William. He was unsatisfied with the share of power allotted to him, and quarreled with his father and brothers fiercely.

In 1063 his father made him into the count of Maine, considering his engagement to Margaret. The county was presumably run by his father until 1069 when the county revolted and reverted to .

In 1077, he instigated his first insurrection against his father as the result of a prank played by his younger brothers William Rufus and Henry, who had dumped fetid water on him. Robert was enraged, and urged on by his companions, started a brawl with his brothers that was only interrupted by the intercession of their father. Feeling that his dignity was wounded, Robert was further angered when King William failed to punish his brothers. The next day Robert and his followers attempted to seize the castle of . The siege failed, but when King William ordered their arrest, Robert and his companions took refuge with Hugh of Chateauneuf-en-Thymerais. They were forced to flee again when King William attacked their base at Rémalard.

Robert fled to his uncle's court in Flanders before plundering the county of the and causing such mayhem that his father King William allied himself with King to stop his rebellious son. Relations were not helped when King William discovered that Robert's mother, Queen Matilda, was secretly sending her son money. At a battle in January 1079 Robert unhorsed King William in combat and succeeded in wounding him, stopping his attack only when he recognized his father's voice. Humiliated, King William cursed his son, then raised the siege and returned to Rouen. At Easter 1080 father and son were reunited by the efforts of Queen Matilda, and a truce lasted until 1083. Robert seems to have left court soon after the death of his mother, Queen Matilda, and spent several years traveling throughout France, Germany and Flanders. He visited Italy seeking the hand of the great heiress (b. 1046), but was unsuccessful.

During this period as a wandering knight, Robert sired several illegitimate children. His illegitimate son, Richard, seems to have spent much of his life at the royal court of his uncle, . Like his uncle, this Richard was killed in a hunting accident in the in 1099. An illegitimate daughter was later married to .

In 1087, the Conqueror died of wounds suffered during a riding accident during a siege of Rouen. At his death, he reportedly wanted to disinherit his eldest son, but was persuaded to divide the Norman dominions between his two eldest sons. To Robert, he granted the and to William Rufus he granted the Kingdom of England. The youngest son Henry was given money to buy land. Of the two elder sons, Robert was considered to be much the weaker and was generally preferred by the nobles who held lands on both sides of the , since they could more easily circumvent his authority. At the time of their father's death, the two brothers made an agreement to be each other's heir. However, this peace lasted less than a year when barons joined with Robert to displace Rufus in the . It was not a success, in part because Robert never showed up to support the English rebels.

Robert took as his close advisor , who had been previously a close advisor to his father. Flambard later became an astute but much-disliked financial advisor to William Rufus until the latter's death in 1100.

In 1096, Robert left for the on the . At the time of his departure he was reportedly so poor that he often had to stay in bed for lack of clothes. In order to raise money for the crusade, he mortgaged his duchy to his brother William for the sum of 10,000 marks.

Robert and William had agreed to name each other the of England and Normandy respectively. Therefore, when William II died on 2 August 1100, Robert should have inherited the throne of England. But he was on his return journey from the Crusade, marrying a wealthy young bride to raise funds to buy back his duchy. As a result, his brother Henry was able to seize the crown of England for himself.

Upon his return, Robert, urged by Flambard and several Anglo-Norman barons, led an invasion of England to retake the crown from his brother Henry. In 1101, Robert landed at with his army, but his lack of popular support among the English as well as Robert's own mishandling of the invasion tactics enabled Henry to resist the invasion. Robert was forced by diplomacy to renounce his claim to the English throne in the . It is said that Robert was a brilliant field commander, but a terrible general in the First Crusade. His government (or misgovernment) of Normandy as well as his failed invasion of England proves that his military skills were better than his political skills.

In 1105, however, Robert's continual stirring of discord with his brother in England, as well as civil disorder in Normandy itself, prompted Henry to invade Normandy. Orderic reports on an incident at Easter 1105, when Robert was supposed to hear a sermon by the venerable Serlo, . Robert spent the night before sporting with harlots and jesters, and while he lay in bed, sleeping off his drunkenness, his unworthy friends stole his clothes. He awoke to find himself naked, and had to remain in bed and missed the sermon.

In 1106, Henry defeated Robert's army decisively at the and claimed Normandy as a possession of the English crown, a situation that endured for almost a century. Captured after the battle, Robert was imprisoned in castle for 20 years, before being moved to .

In 1134, he died while imprisoned in in his early eighties. Robert Curthose, sometime Duke of Normandy, eldest son of the Conqueror, was buried in the abbey church of in . The exact place of his burial is difficult to establish - legend states the he requested to be buried before the High Altar. However, his effigy, carved in bog oak, lies on a mortuary chest decorated with the attributed arms of the Nine Worthies (missing one - Joshua, and replaced with the arms of Edward the Confessor). The effigy dates from about 100 years after his death, and the mortuary chest much later. The church subsequently has become .

The name 'Curthose' can still be seen today, in France as Courtoise and in Britain as .

Robert married Sybilla, daughter of , Count of (and a grandniece of , another Norman duke) on the way back from Crusade. Their son, , was born 25 October 1102 and became heir to the Duchy of Normandy. Sybilla, who was admired and often praised by the chroniclers of the time, died shortly after the birth. claims she died as a result of binding her breasts too tightly; both and suggest she was murdered by a cabal of noblewomen led by her husband's mistress, Agnes Giffard. William Clito was unlucky all his life; his attempts to invade Normandy failed twice (1119) and (1125), his first marriage to a daughter of the count of Anjou was annulled by his uncle's machinations, and even his late inheritance of the county of Flanders was mishandled. William Clito died in 1128 leaving no issue, thus leaving the field clear in the Norman succession (at least until Henry I died).

Robert also had at least two illegitimate children - Richard who died hunting in the New Forest in 1099 (like his uncle a year later) and a daughter who married Helias of Saint-Saens (a worthy and loyal protector of his young brother-in-law in 1112).

Robert was portrayed by actor in the TV drama "Blood Royal: William the Conqueror" (1990).

* [http://www.findagrave.com/cgi-bin/fg.cgi?page=gr&GRid=10215 Robert II, Duke of Normandy at Find A Grave]