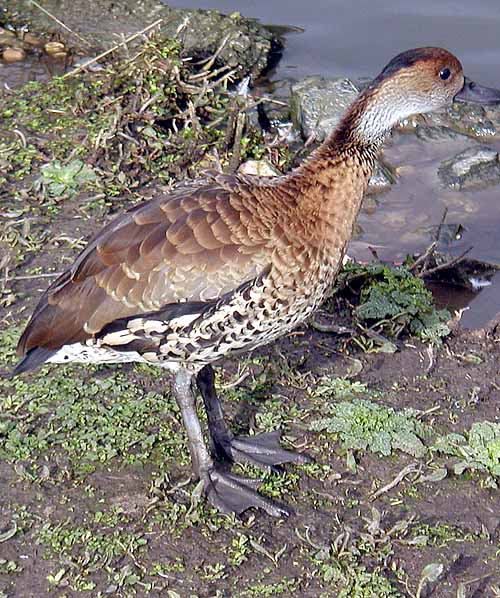 The Black-billed Whistling Duck is widely scattered throughout the West Indies including a large breeding population in the , and smaller numbers in , the , , and . It is largely sedentary, apart from local movements which can be 100 km or more. Nests have been reported in tree cavities, on branches, in clumps of bromeliads, and on the ground under thatch palms and other dense bushes. The usual clutch size is 10-16 eggs. It habitually perches in trees, which gives rise to its specific name.

The birds are mostly nocturnal and secretive, inhabiting wooded swamps and mangroves, where this roosts and feeds on plant food including the fruit of the .

The Black-billed Whistling Duck is the largest (48-58 cm) and darkest of its genus. It has a long black bill, long head and longish legs. It has a pale foreneck and light brown face. The crown, back, breast and wings are dark brown to black, and the rest of the underparts are white with heavy black markings.

All plumages are similar, except that juveniles are duller and have a less contrasted belly pattern.

The Black-billed Whistling Duck has suffered extensive hunting for its eggs and for sport. are a very limited habitat in the , with continuing conversion for development and agriculture. More than 50% of remaining wetlands are seriously degraded by the cutting of mangroves and swamp-forest, pollution (especially over-use of pesticides1) and natural catastrophes such as s and . is inadequately documented but may be a factor.

Appendix II. CMS Appendix II. It is legally protected throughout much of its range, but law enforcement is inadequate. (1997) The West Indian Whistling Duck Working Group initiated a conservation programme in 1997. (1997) There are several protected areas in the region but, in general, suitable habitat, especially wetlands, is under-represented. (1997)