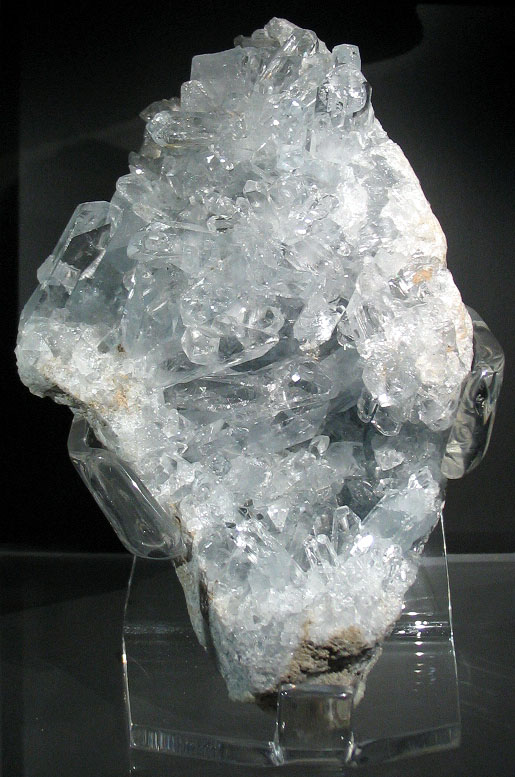 Celestine or celestite [Nickel, Ernie.; Nichols, Monte. [http://www.geo.vu.nl/users/ima-cnmmn/MINERALlist.pdf Mineral Names, Redefinitions & Discreditations Passed by the CNMMN of the IMA] , Materials Data, Inc., 2004, p. 26 - Celestine is the approved name for this mineral by the Commission on New Minerals and Mineral Names (CNMMN). Although "celestite" finds frequent usage in some minerological texts, the name has been discredited as a valid mineral name by this organization.] (SrSO4) is a consisting of . The mineral is named for its occasional delicate blue .

Celestine occurs as s, and also in compact massive and fibrous forms. It is mostly found in rocks, often associated with the minerals , , and .

The mineral is found worldwide, usually in small quantities. Pale blue crystal specimens are found in .

The largest known celestine is located near the village of on in . The geode is 35 feet in diameter at its widest point. It has been converted into a viewing cave, and the crystals which once composed the floor of the geode have been removed. The Crystal Cave has celestine crystals as wide as 18 inches across and weighing up to an estimated 300 lb.