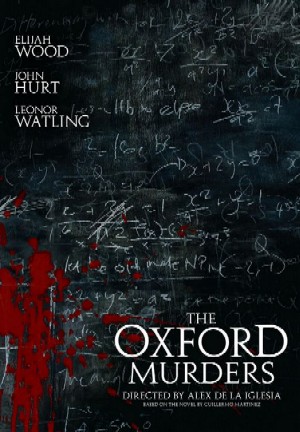 "The Oxford Murders" is a 2008 adapted from an award-winning novel of the same name by the Argentine and , directed by and starring , and .

November 1993. Wood plays Martin, an American student at the who wants Arthur Seldom (Hurt) as his thesis director.In a public lecture, Seldom quotes Wittgenstein's "Tractatus" to deny the possibility of truth.Martin contests asserting his faith in the mathematics under reality.Later, Martin and Seldom coincide and find Martin's landlady (also a friend of Seldom's) murdered.Seldom declares to the police that he had received a note with his friend's address marked as "the first of a series".As Seldom is an authority on logical series, he suspects that a serial murderer is defying his intelligence.Martin, Seldom and Lorna (Leonor Watling), a Spanish nurse, will try to guess the following terms of the series as murders continue.

The characters debate several mathematical and philosophical concepts such as logical series, 's , , s, the , the possibility of , "Fermat"'s Last Theorem and its proof by "Professor Wiles", the Taniyama conjecture, the and the .

The film is a Spanish-French-British production directed by Spanish . Before the confirmation of the presence of the actor in the film, the Mexican actor had been considered for the role of the mathematics student. There were some weeks of speculation on who would play the lead. On 26 December 2006 Tornasol Films announced that Wood was cast in the lead role. The director commented that he convinced Wood to accept the role for the script. De la Iglesia also praised Wood: “"I'm delighted to work with Elijah, who undoubtedly has the most powerful eyes in the industry and who is perfect for the part"”.

The British actor was cast in the role of a professor of the , who is a fan by the detective work and goes to help the young student in his quest to try to stop a series of murders. The actor had been considered for the this role.De la Iglesia has described daily in his blog the peculiar situations that happen during the production of the film. The film is his first foray outside his typical black comedy genre into more dramatic fare. [ [http://www.hoy.es/prensa/20070119/sociedad/iglesia-inicia-rodaje-crimenes_20070119.html De la Iglesia inicia el rodaje de 'Los crímenes de Oxford'. hoy.es ] ] [ [http://www.redaragon.com/noticias/noticia.asp?pkid=293382 noticias ] ] [ [http://www.variety.com/article/VR1117952302.html Eurimages gives coin to 'Oxford' - Entertainment News, Web Exclusive, Media - Variety ] ] [ [http://www.hollywoodreporter.com/hr/content_display/film/news/e3ie8e2bec15b5c4d74d311de27d333b4f7 Wood joins suspects in 'Murders' ] ]

Filming began on 22 January 2007 and had finished on 24 March, with locations in and the Cast Courts of the of . It has been picked up for UK release by , opening there on 25 April 2008. So far, the release date for the US is unknown.