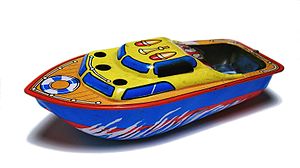 A pop-pop boat is a toy with a very simple heat engine without moving parts, powered by a candle or oil burner. The name comes from the noise the boats make. Other names are putt-putt boat, crazy boat, flash-steamer, hot-air-boat, pulsating water engine boat. Around the world they may be called Can-Can-boot, Knatterboot, toc-toc, Puf-Puf boat, Poof Poof craft, Phut-Phut, or Pouet-Pouet.[1]

Pop-pop engine with a candle, a heating tank and two pipes (small arrows located at the end of the two pipes try to schematize the circulation of water).

Boiler designs vary. Simple metal containers in the shape of a box or cylinder are common. A more efficient boiler can be made by using a metal pan whose top is a slightly concave diaphragm made out of a very thin, springy metal. Many pop pop boats have used a single tube of metal, which is formed into a coil in its center and left straight on both ends to form the exhausts. The coil in this version functions as the boiler.

A heating element of some sort is placed under the boiler. Candles or small oil burners are commonly used. 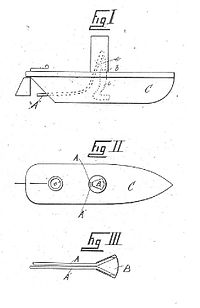 Pop-pop engine design, from a patent application filed by Thomas Piot in 1891.

The diaphragm type engine, from a patent application filed by Paul Jones in 1934. 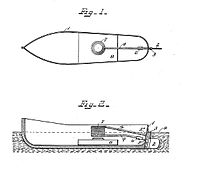 Coil type engine, from a patent application filed by William Purcell in 1920.

Credit for the first pop pop boat is usually given to a Frenchman named Thomas Piot. In 1891, Piot filed a patent application in the UK for a simple pop pop boat using a small boiler and two exhaust tubes.[2][3] A 1975 article by Basil Harley mentions a similar boat seen in a French journal from 1880, indicating that this type of toy may have existed for many years prior to Piot's patent.

McHugh filed for another patent in 1926. This was again a diaphragm engine design, refined so that it could be more easily fabricated commercially.[6] In 1934, Paul Jones filed a patent for another diaphragm design which could be produced industrially from simple stamped parts.[7]

Many pop pop boats produced in the 1920s had a single exhaust pipe. Designs using two exhaust pipes are easier to fill, and have been much more common over the years.

Pop pop boats were popular for many years, especially in the 1940s and 1950s. Pop pop boats declined in popularity along with other tin toys in the latter half of the 20th century as plastic toys took over much of the market. While they are no longer produced in as large of numbers, pop pop boats continue to be produced. These toys have come in many varieties over the years. Some have been very simple and inexpensive, while others have been much more ornate and artistic. As with many toys, pop pop boats are often sought by collectors, and the prices paid vary depending on rarity and design.

The pop pop boat featured prominently in the 2008 Japanese animated fantasy film Ponyo.[8] Toy boats with a diaphragm type engine, like the one shown in the film, were produced and sold as a tie-in when the movie was released.[9]

A pop pop boat is powered by a very simple heat engine. This engine consists of a small boiler, which is connected to an exhaust tube. When heat is applied to the boiler, water in the boiler flashes into steam. The expanding steam pushes some of the water in the exhaust tube, propelling the boat forward. The steam bubble then condenses, creating a vacuum which draws water back in through the exhaust tube. The cooled water that is brought back into the boiler is then heated and flashed into steam, and the cycle repeats. This constant flashing and cooling cycle of the engine creates the distinctive "pop pop" noise for which the boat is named. This noise is more pronounced when a diaphragm type boiler is used. Coil type boilers are much quieter.

Note that in pop pop boats with two exhaust tubes, the water is expelled from both tubes during the first phase of the cycle, and drawn in from both tubes during the second phase of the cycle. The water does not circulate in through one tube and out through the other. The internal-combustion analog of the pop pop boat engine is the valveless pulse jet.

The operation of the pop pop boat may seem surprising, since one might expect that if water is going in and out through the exhaust tube, the boat should merely shake back and forth. But while the water pushed out carries away with it momentum, which must be balanced (by Newton's third law) by an opposite momentum on the part of the boat, the water sucked in quickly impinges on the boiler tank and transfers its momentum to the boat. The initial reaction force on the boat (which would pull it backwards) is therefore cancelled by the pushing of the water when it hits the inside of the boiler. The result is that the inflow of water causes no appreciable force on the boat.[10]

Some authors have argued that the reason why the pop pop boat works is that the water being propelled out the back of the boat forms a narrow jet, while the water being drawn back in on the second half of the cycle is drawn in from all directions.[11][12] This asymmetry may be seen as well in the way in which one blows out a candle: it is easy to extinguish a candle by blowing on it, since all of the air expelled is moving in a concentrated, directional jet. However, it is difficult to put out the flame by sucking in air, since the air being sucked in comes from all directions.[13] This observation, though correct, may be misleading as an explanation of why the pop pop boat moves forward. The asymmetry of the shapes of the inflow and the outflow is a consequence of the viscosity of the fluid, whereas the boat would be able to operate in an ideal fluid.[10]

The physics of the operation of the pop pop boat is very similar to that of the "Feynman sprinkler," a submerged sprinkler which is seen to turn weakly or not at all as water is sucked in through it. In both cases, the reaction force on the solid device caused by the sucking in of the fluid is balanced by the fluid impinging on the inside of the device.[10][14]