Die keusche Susanne (Chaste Susanne) is an operetta in three acts by Jean Gilbert. The German libretto was by Georg Okonkowski, based on the play Le fils à papa by Antony Mars and Maurice Desvallières. Jean Gilbert's son, Robert Gilbert prepared a revised version in 1953.

It was first performed at the Wilhelm-Theater in Magdeburg on 26 February 1910. It was the composer's greatest success, enabling him to move to Berlin to become conductor of the Thalia-Theater.

Adapted into English, by Frederick Fenn and Arthur Wimperis, it was produced in London in 1912 as The Girl in the Taxi. Adapted back into French by Mars and Desvallières, it was produced in Paris and then Lyon in 1913 as La chaste Suzanne. It was also successful in South America in Italian (La casta Susana) and in Spanish (La chasta Suzanna). Gilbert conducted the work there two decades later when he was forced to leave Germany and move to Argentina. Even that was only one production of this operetta in Brazil, Susana[spelling?] is the most performed operetta in Brazil, and the only production was in São Paulo in 1970.[clarify][1] 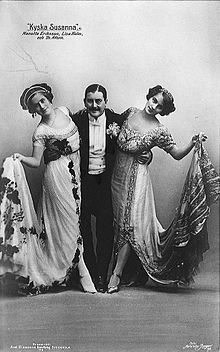 A silent film version was made in 1926 by Richard Eichberg, starring Lilian Harvey, Willy Fritsch, Ruth Weyher, and Hans Wassmann. Novafilm Fernsehproduktion also made a version for television in 1972 directed by Thomas Engel with Maria Schell as Susanne.