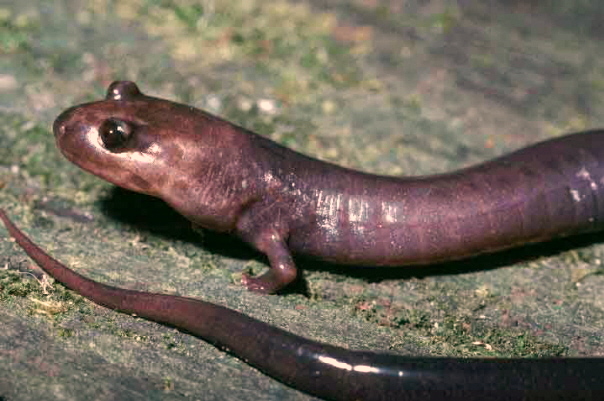 The Red Hills Salamander ("Phaeognathus hubrichti") is a fairly large, terrestrial growing to about 255 millimeters. Its body color is gray to brownish without markings, and its limbs are relatively short. It is the official state amphibian of Alabama. [cite web |url=http://www.archives.state.al.us/emblems/st_amphib.html |title=Official Alabama State Amphibian |accessdate=2007-03-18 |date= |work=Alabama Emblems, Symbols and Honors |publisher=Alabama Department of Archives & History]

The range of the Red Hills Salamander is restricted to a narrow belt of two geological formations, approximately 60 miles long (east to west) and between 10 and 25 miles wide (north to south), in southern . These formations are included within the physiographic province of the . The range is limited on the east by the and on the west by the (Jordan and Mount 1975). Currently, there are eight published locality records from Butler, Conecuh, Covington, Crenshaw, and Monroe Counties (Brandon 1965; Schwaner and Mount 1970).

This species inhabits burrows located on the slopes of moist, cool mesic ravines shaded by an overstory of predominately hardwood trees. These areas are underlain by a subsurface siltstone stratum containing many crevices, root tracings, and solution channels which are utilized by the Salamander. The topsoil in typical habitat is sandy loam.

Data for comparison of habitat changes are available from two studies; one by French (1976) and one by Dodd (1989). Ninety-one of the same sites were surveyed in both studies. (Each study also surveyed additional sites not visited by the other study.) Of these 91 sites, 54 appeared similar to earlier descriptions, 19 had improved habitat conditions, and 18 were adversely affected by timber cutting since 1976. Of the 19 sites judged to have improved, 18 had been cleared of trees or had been selectively cut prior to French's survey but have since regrown a full tree canopy. (None of these improved sites had been mechanically prepared for replanting.) In addition to these 91 sites, 14 others examined in the latest survey were damaged by timber cutting; their status in 1976, however, was unknown.

The Red Hills Salamander is considered a threatened species. Primary threats to this species include its restricted range, loss of habitat, a low reproductive rate and a limited capability of dispersal. Of the approximately 63,000 acres (250 km²) of remaining habitat, about 60 percent is currently owned or leased by paper companies which primarily use a clear-cut system of forest management. This technique, coupled with mechanical site preparation for replanting, appears to completely destroy the habitat for the Red Hills Salamander.