The Life Before Her Eyes

The Life Before Her Eyes

Infobox Film
name = The Life Before Her Eyes 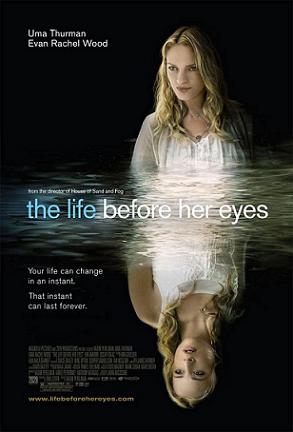 "The Life Before Her Eyes" is an American 2008 / directed by . The screenplay was adapted by Emil Stern from the novel of the same name. The film stars and . It was released on April 18, 2008 and revolves around a woman's survivor's guilt from a Columbine-like event that occurred fifteen years ago, which causes her present-day idyllic life to fall apart.

Imaginative, impetuous and wild Diana () can’t wait for her adult life to begin. Whiling away the final days of high school in the lush springtime, Diana tests her limits with sex and drugs as her more conservative friend Maureen () watches with concern. Then the two teens are involved in a Columbine-like shooting incident at their school and are forced to make an impossible choice. Only one of them can live...

15 years later Diana () is married and has a daughter. A memorial service at her high school brings back old memories and as past and present start to intertwine her husband and daughter become increasingly absent and Diana finds her life slipping away.

The central theme of both the novel and the film is the loss of lives in these shooting incidents. Laura Mischance and Vladimir Perelman took an interesting approach to drive that point home that slowly leads up to a shocking realisation about Diana.

"The Life Before Her Eyes" received generally negative reviews from critics. As of April 23, 2008, the review aggregator reported that 29% of critics gave the film positive reviews, based on 35 reviews &mdash; with the consensus being the film is "a confusing, painfully overwrought melodrama." [cite web|url=http://www.rottentomatoes.com/m/life_before_her_eyes/ |title=The Life Before Her Eyes Movie Reviews, Pictures - Rotten Tomatoes |accessdate=2008-04-23 |publisher=] reported the film had an average score of 32 out of 100, based on 15 reviews.

Uma Thurman was rumored and in the top list in contenders for the Oscar battle as Best Actress.

[cite web|url=http://www.metacritic.com/film/titles/lifebeforehereyes |title=Life Before Her Eyes, The (2008): Reviews |accessdate=2008-04-23 |publisher=]