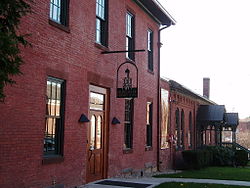 The Museum of Russian Icons opened in October 2006 in Clinton, Massachusetts, United States. The non-profit museum was created by collector Gordon Lankton to house his extensive collection of Russian icons. Lankton was president and is currently chairman of NYPRO, a billion dollar sales plastic molding company headquartered in Clinton with offices and manufacturing facilities across the globe. His Russian icon collection comprises over 340 icons from the 13th century to the present and covers almost the entire range of Russian icon images, symbols and forms. It is one of the largest private collections outside of Russia and the largest in North America. 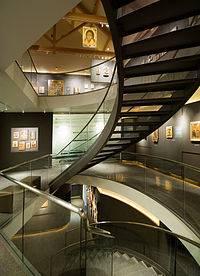 Interior of the Museum

The museum is located on Central Park, Clinton, Massachusetts in a historic 1830 brick building. The interior was re-designed by David Durrant to incorporate state-of-the-art technology, including solar collection systems, vegetative insulated roof systems, and fiber optic lighting. Lighting in the new temporary exhibition gallery is LED, at less than 15 watts per spot light light this is an enormous energy conservation program. Entirely climate controlled, the new museum provides the highest installation standards available. According to Durrant, "Gordon told us he wanted a facility that would stack up against the great museums of this country, and we believe that is what we have done."[1]

Inside the traditional restored brick building, the three floors of the museum are connected by custom-designed, sweeping metal and glass stairways that allow visual access to all floors from any place in the museum. The floors also are all connected by an elevator; the building is totally ADA compliant.

This exhibition, in an ongoing series of major international shows originated by the Museum of Russian Icons, features over 35 important icons from one of the finest museums in Russia. The earliest work is a late 15th century Baptism, a fine example of the influence of Byzantine style that was the origin of this form of Russian sacred art. Major examples of the Trinity and complex vita icons adorn the walls of the spectacular, new special exhibition room.

2011 the latest construction project features a state of the art auditorium and multi use workshop space designed by David and Pam Durrant of the Town of Harvard. Opening in June 2011 will be the new Russian tea room, with glittering stone pilasters, glass walls, and a coffrered ceiling evoking the Imperial style of pre Revolutionary Russia. This room is in the old court house retention goal featuring the original Civil War era goal cells with iron bar grilles. By the time this phase of the new construction will be completed in summer 2011 the Museum will have doubled in size. The building is powered by solar panels integrated into the roof system, yielding a sizeable proportion of the electricity needs of the building.

Completed in 2010 a new special exhibition room has been created adjacent to the main building of the Museum. Connected to the original structure by a new and glamorous Gift Shop the space features restored historic court room painted a rich red, light by long windows. Outside the space is a summer terrace overlooking the 19th factiory buildings of the Nypro Inc. Heardquarters. The roof is a new green technology featuring a vegetative cover that insulates the rooms below.

In 2009, less than three years after opening its doors, the Museum of Russian Icons broke ground on a major expansion project. The new space includes a new gallery, auditorium, library, and office space. After expansion, the size of the museum doubled. The Museum of Russian Icons has recently purchased another building in Clinton for additional classroom space, part of the building will be used as a suite of rooms for a resident scholar.

The Museum of Russian Icons puts on many different events such as lectures, concerts,and outreach programs. Notable lectures sponsored by the Museum include talks given by Prof. Wendy Salmond of Chapman University, Prof Oleg Tarasov of the Moscow Institute, and many of the most eminent academics in the field of Russian icons. Concerts are held in the Museum's new South Gallery and other events and programs frequently take place at the Museum as well. In the summer of 2009 inaugurated international travel programs and annual trips to Russia with icon experts and staff take place. The Museum has partnered with the Prosopon School of Icon painting and other icon writing masters to present regular icon writing courses. The Museum has hosted conferences with the College of the Holy Cross and has collaborations with many of the universities in the region.[2]