Lonchura is a genus of the estrildid finch family, and includes munias (or minias), mannikins, and silverbills. They are resident breeding birds in Africa and in South Asia from India and Sri Lanka east to Indonesia and the Philippines. The name mannikin is from Middle Dutch mannekijn 'little man' (also the source of the different bird name manakin).[1]

Some of the Lonchura species were formerly placed in Spermestes. Others have been placed in a genus of their own, Euodice.

They are small gregarious birds which feed mainly on seeds, usually in relatively open habitats, preferring to feed on the ground or on reeds and grasses. Several species have been noted to feed on algae such as Spirogyra.[2][3]

The nest is a large domed grass structure into which 4–10 white eggs are laid. Some species also build communal roosting nests for overnight rest.

The species in this genus are similar in size and structure, with stubby bills, stocky bodies and long tails. Most are 10–12 cm in length. Plumage is usually a combination of browns, black and white, with the sexes similar, but duller and less contrasted for immature birds.

The similarities within this group and the existence of subspecies with differing vocalisations and plumage mean that some races may be elevated to species status. African and Indian Silverbill are now usually considered distinct species, and the two races of Black-throated Munia are often also split.

The munias are popular in the bird trade and many freed or escaped birds have formed feral colonies in different pockets across the world. 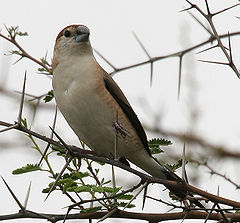 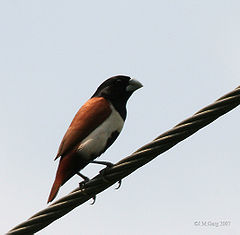 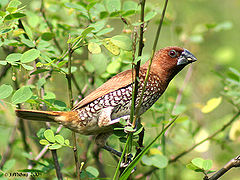