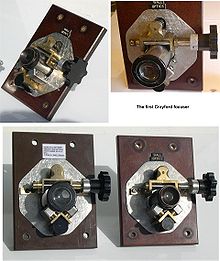 The Crayford focuser is a simplified focusing mechanism for amateur astronomical telescopes. The design replaces the complicated rack and pinion drive normally found in this type of device with a smooth spring-loaded shaft which holds the focus tube against four opposing bearing surfaces. It is named after the Crayford Manor House Astronomical Society, Crayford, London, England where it was invented by John Wall, a member of the astronomical society which meets there. The original Crayford Focuser is on display there.

The Crayford focuser was initially demonstrated to the Crayford Manor House Astronomical Society, and then descriptions were published in The Journal of the British Astronomical Association (February 1971), Model Engineer magazine (May 1972) and Sky & Telescope magazine (September 1972). John Wall decided not to patent the idea, effectively donating it to the amateur astronomical community.

Crayfords are popular among amateur telescope makers as they are easy to make without any high precision machining, yet provide precise focusing with no gear slop or backlash. They are also made in a variety of designs by companies specializing in amateur telescope supplies.

The Crayford focuser design is reminiscent of the Dobsonian design for telescopes, since instead of precision machining, it relies on geometry to preclude any wobble or backlash.

The Crayford is similar in appearance to a Rack and pinion focuser, but has no teeth on either the rack or the pinion. Instead, a round axle is pressed (for example by a spring-loaded or thumbscrew-tightened piece of PTFE plastic) against a flat on the side of the focuser drawtube, relying only on friction to move the drawtube as the axle is turned. This also presses the drawtube against a set of four ball bearings against which it moves smoothly with minimal friction. The pressure exerted on the axle can often be adjusted for smoothest operation, and the drawtube may be locked in position to support heavy eyepieces or cameras.

Subsequently, variations on the Crayford focuser concept have emerged, e.g. a helical Crayford where the drawtube is pressed against four tilted ball bearings, and focusing action is accomplished by rotating the drawtube.