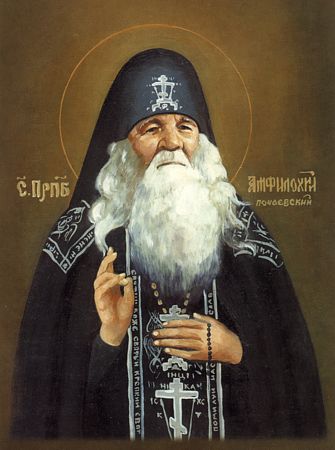 The Venerable Amphilochius of was born Yakiv Holovatyuk on , in the village of (Mala Ilowica in Polish), in of in western , at that time part of . The village of Mala Ilovytsya is located in , which is 7 km wide, and is surrounded by the mountains. It is the northernmost village of , off the main roads surrounded by forested areas. A remarkable tree grows in the village, a 350 year old . His father, Varnava, had 10 children. As a young soldier he went through the nightmares of the First World War when heavy battles took place in the area between imperial Austria and tsarist Russia at that time. There he saw death and started to understand the gift of life. Soon he was taken a prisoner of war by the Austrians but with God's help Yakiv managed to flee.

Having returned home he intended to marry but the priest blessed him to join . Yakiv humbly received the blessing and in 1925 happened to be in the Uspens’ka () in . He performed all his duties with love of labour and humbliness and in 1932 he was d a through "postryh" (clipping of hair ceremony) and took the name Joseph (Yosyp in Ukrainian). Since then became home to the where he spent some 20 years. He spent much time praying at the miraculous of . He was appointed the caretaker of the God’s Mother’s Foot. God’s Mother’s Foot is a left after of in the pillar of fire on the rocks in around 1240 after prayers of monk-refugees from destroyed by . pointed out then where the will emerge and being wrapped in ascended from earth to heaven leaving after her a clear footprint on the rock. Since then the footprint gets constantly filled with healing water.Fact|date=September 2008 Joseph carried out his duty with great awe and responsibility. He saw, people healing when using and washing with . In 1936 He received the rank of (priest-monk). His healing gifts were attracting attention of many people. of blessed monk in this work and allowed him to settle in a little hut near the cemetery. There the venerable Amphilochius had been living in 20 years spending days and nights in prayers. Having dedicated his life to Lord, starets’ gained from firm faith and gifts of and . cured through him body sicknesses and hidden spiritual diseases, returning vision to the blind, hearing to the deaf, hope to the wretched.Fact|date=September 2008 The sick were carried to him from all around the world. The flow of the sick ceased neither at day or night. The street was overfilled with carts. The queue lines were measured in kilometeres. Saint Amphilochius experienced human pain as his own, having compassion to all those suffering and weak. And of himself he used to say: "Do you think I am holy? I am a ner! And healing you receive according to your s and your ." He had a powerful impact on people. Many of those who did not believe in after the first conversation with him were returning to church. And in itself, it was hard to find anyone who would not come to him for help at least once. All knew him.

In the summers, the to Saint Amphilochius (then called father Joseph) was increasing, reaching 500 people daily. The souls, hearts and intentions of all people were known to starets’. Father Joseph healed the most persistent diseases but used to tell that not all leave him healthy claiming that bodily health can cause only damage to some - the loss of the soul. God’s servant had had great love in his heart and never used to refuse anyone, paid attention to every person. When being asked how he managed to reach such love, he was answering: "For gives the grace of love". He had a permanent rule: if the sick is brought –he should be called out to such at anytime of the day or night.

Arrests and persecutions by Soviet authorities

In September 1939 the area was occupied by the Soviet s. Prior to that time, Pochayiv, like the rest of western , was part of , governed by Piłsudski from 1926 to 1935. During the interwar period, Pochayiv was often referred to by its Polish name, Poczajow (Pochayoov). The nearby town of (Krzemieniec in Polish) was home to one of the greatest Polish poets - . Guests from the started coming to the little hut of father Joseph. Once they bound him and wanted to throw him down from the precipice. But father calmly said: "You will not manage to carry me far away". On the way to the lavra one became blind, another's hand refused to move and the third's foot became immobile.Fact|date=September 2008 They started begging him for forgiveness. He blessed them and let them go as healthy as before they met him.

Soon after, the guests from the NKVD came again in the night and ordered him prepare dinner and then asked him to come with them. In the cemetery he was informed about his imminent execution. The venerable father stood calmly while Father Irynarkh, who used to live with him, started reading a prayer. Father Irynarkh then ran out of the house with the words: "Do you know whom you are killing?! He is saving the entire world! Better kill me." The execution was postponed.

Despite the prohibitions, father continued to heal the sick. Even those who were considered incurable by medical science became cured.Fact|date=September 2008 The authorities prohibited people visiting the '. Even buses were canceled. But this did not stop the people.

In 1962 the authorities attempted to take away the Church from the . With his courage father Joseph defended the shrine. When he saw the band of militia men near the church, father snatched a key from one of them and gave it to the : "The archipriest is the head of the lavra! And you get away from here! People, chase them out!" The locals, being inspired by the words of father, attacked the occupants and chased them away from the gates. This way father saved the monastery.

This almost cost him his life. Soon after, they came after him in a car known as a "black raven". They bound him, shut his mouth with a towel and took him to the psychiatric hospital. There he was beaten, had his hair cut off and was put into a room with violent patients. Later father Joseph recalled: "There was a dim light in the room and about 40 sick persons. I was constantly injected with medicine from which my whole body became swollen and my skin cracked… Once I was called to the main physician and asked if I can cure all the sick. I said: "I can" and asked them to bring me the and religious items in order to carry out the water-baptismal prayer. I said that after the prayer, the demons will leave by themselves through windows and doors. The main physician got furious: “You should cure them without prayers!" And I say to him: "It is impossible to cure so. When a soldier goes to battle, he takes a rifle, bullets, and hand-grenades. Our weapons are the Holy Cross, the Holy Gospel, and !"

After such a conversation father Joseph was forced to remain a long time in the hospital. Help came from the daughter of , . As it turned out, the starets’ had once cured her of emotional sickness. The thankful patient did not forget the merciful father and freed him from the hospital. His relatives took him to his village, Ilovytsya. But even there he was betrayed by one of his twelve nephews. One of them happened to be an evil and jealous person. He took father to the forest, beat him and threw into a swamp. Eight hours he lay unconscious in the water. His relatives found him and took him to . The state of the hieromonk was precarious. The brothers did not dare hope that he would survive till morning. That same night he was tonsured in schema with name Amphilochios (Amfilokhiy in Church Slavonic). Soon thereafter he recovered.

He settled in the village of Ilovytsya at the house of his niece Anna, where he continued to receive the sick. All the nearby villages knew about the water-blessing prayers conducted by the starets’. A great number of people attended the services. Father used to say that in his court the ground was soaked with the tears of gravely sick people that with all their hearts begged for healing. People from the most faraway republics of the were bringing to him those demonically possessed for healing.

God’s servant felt coming of . Once in the summer 1970 father together with his friend walked the forest path. Having heard a cuckoo he said: "This is the last time I listen to a with you…" The same year the saint departed to . Shortly before passing, during an evening meal, father invited all to the table and as if joking said: "The is already presented!". The other day father said: "All of you are dear to me but there is among you". The real cause of death of Saint Amphilochius remains unknown until today. It is suspected that he was poisoned by one of his servants. Just before the death he once said: "How terrible it will be when they will start casting the frozen soil on the coffin." He died on , , the snow was blowing and covering everything. Soon after, the sick people who were visiting his grave, noticed that they were returning healthy. And so it was over 30 years! People were going to his grave to tell of their problems and to get healthy.

Saint Amphilochius stared appearing in to many servants of the requesting to move his there. On , , he was canonized by the after Church commission researched his life. Just before the his were uncovered fully uncorrupt. Over 20.000 Orthodox arrived to take part in the of Saint Amphilochius. Many s took place those days when people were coming to touch his .

Today his relics are kept in the depth of the church along with those of St. Job in of Ternopil' region in western area of .

"Some of the content of this article is based on an [http://jov.journalspace.com/?entryid=7 essay by Roman Zacharij] ; Mr Zacharij has released the content of that essay under the terms of the GFDL."