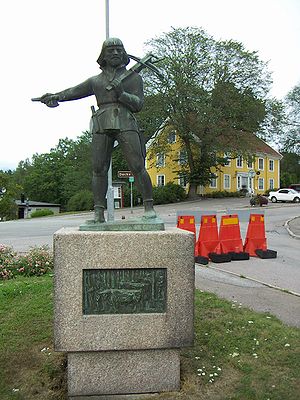 Statue of Nils Dacke in Virserum

Nils Dacke was the leader of a 16th century peasant revolt in Småland, southern Sweden called the Dacke War (Swedish: Dackefejden), fought against the Swedish king Gustav I. It was the most widespread and serious civil war in Swedish history and almost toppled the king.[1]

Gustav Vasa had come to power at the head of a peasant army in 1523. He had established Sweden's independence from Denmark and made Protestantism the national religion. Småland found itself on the border between Sweden and Denmark and was hard hit by Vasa's ban on cross border trade. In addition, the hard-handed way the church was reformed and the increasing tax burden led to much dissatisfaction among the poor peasants. Already in 1536, Nils Dacke was tried at a local court for killing a sheriff: according to court records he was fined 10 oxen.

The uprising started in June 1542 with the assassination of more sheriffs and tax collectors. Gustav Vasa underestimated the military prowess of the peasants and sent his German mercenaries to quell the revolt. The landsknechts were, however, unsuited for battle in the rugged forests and suffered heavy losses. Dacke had devised defensive tactics that allowed the peasants to use their steel crossbows with devastating effect. Dacke's successes helped spread the revolt over all the southern provinces of Sweden. The situation was so serious that the king was forced to sue for peace, and a one-year ceasefire was signed on November 8. During the ceasefire, Dacke was the de facto ruler of southern Sweden and received (and declined) offers of foreign support. He reinstated the ceremonies of the Roman Catholic Church and reopened the cross border trade in the areas under his control.

The king broke the ceasefire in January 1543 and sent a new and larger army into the rebellious area. Royal propaganda had been spread to win over the population and turn them against Dacke. Dacke himself had become overconfident after earlier successes and met the Royal army in a pitched battle in March. The trained soldiers fighting on their own terms shattered the peasant army, and Dacke was severely injured. After this defeat, the rebellion was effectively over and Dacke became an outlaw.

Dacke was shot and killed in the high summer of 1543 in the forests which, at the time, surrounded the southeastern border between Sweden and Denmark (nowadays southern Swedish provinces Småland and Blekinge). According to contemporary sources, he had been injured in both legs by hits from the king's crossbows during the decisive battle a few months earlier, his forces had been routed and he was likely trying to escape from the king's mercenaries. There is no doubt that he was killed on the spot.

Dacke was executed posthumously, quartered, and his limbs were sent for public display in larger communities that had supported him during the rebellion. Gustav Vasa ordered the annihilation of Dacke's entire family, but showed some leniency against those who had given themselves up. Thus, the unity of the realm was restored.

As a result of the war the king was henceforth more careful when dealing with his subjects. The reliance on foreign mercenaries in the army was reduced in favour of soldiers of Swedish extraction (many of which were recruited in Småland) and this laid the foundation for Sweden's military successes in later wars.

Today Nils Dacke is perceived as a Småland freedom hero. His name is often linked to an independence streak in Småland. Statues in memory of him have been erected including one in Virserum, where the final battle allegedly took place during 1543.[2] (Nils Dacke-partiet) is a local political party in Gnosjö County. M/S Nils Dacke is a vessel, owned by TT-Line serving the Trelleborg-Travemünde route. In 1961, a made for television movie titled Dacke, was released by Swedish director and screenwriter Bengt Lagerkvist.