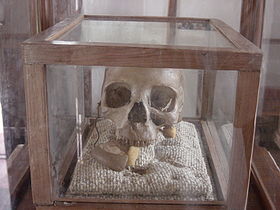 Skull of Chief Mkwawa on display at the Mkwawa Memorial Museum, Kalenga, near Iringa.

Paramount Chief Mkwavinyika Munyigumba Mwamuyinga (1855–19 July 18981), more commonly known as Chief Mkwawa, was a Hehe tribal leader in German East Africa (now mostly the mainland part of Tanzania) who opposed the German colonisation. The name "Mkwawa" is derived from Mukwava, itself a shortened form of Mukwavinyika, meaning "conqueror of many lands". Mkwawa was born in Luhota and was the son of Chief Munyigumba, who died in 1879.

In July 1891, the German commissioner, Emil von Zelewski, led a battalion of soldiers (320 askaris with officers and porters) to suppress the Hehe. On 17 August, they were attacked by Mkwawa's 3,000-strong army at Lugalo, who, despite only being equipped with spears and a few guns, quickly overpowered the German force and killed Zelewski.

On 28 October 1894, the Germans, under the new commissioner Colonel Freiherr Friedrich von Schele, attacked Mkwawa's fortress at Kalenga. Although they took the fort, Mkwawa managed to escape. Subsequently, Mkwawa conducted a campaign of guerrilla warfare, harassing the Germans until 1898 when, on 19 July, he was surrounded and shot himself rather than be captured.[1]

After his death, German soldiers removed Mkwawa's head. The skull was sent to Berlin and probably ended up in a Bremen museum. In 1918 the then British Administrator of German East Africa H.A. Byatt proposed to his government that it should demand a return of the skull to Tanganyika in order to reward the Wahehe for their cooperation with the British during the war and in order to have a symbol assuring the locals of the definitive end of German power. The skull's return was stipulated in the 1919 Treaty of Versailles:

"ARTICLE 246. Within six months from the coming into force of the present Treaty, ... Germany will hand over to His Britannic Majesty's Government the skull of the Sultan Mkwawa which was removed from the Protectorate of German East Africa and taken to Germany."

The Germans disputed the removal of the said skull from East Africa and the British government took the position that the whereabouts could not be traced.

However, after World War II the Governor of Tanganyika, Sir Edward Twining, took up the issue again. After enquiries he was directed to the Bremen Museum which he visited himself in 1953. The Museum had a collection of 2000 skulls, 84 of which originated from the former German East Africa. He short-listed the ones which showed measurements similar to surviving relatives of Chief Mkwawa; from this selection he picked the only skull with a bullet-hole as the skull of chief Mkwawa.

The skull was finally returned on 9 July 1954, and now resides at the Mkwawa Memorial Museum in Kalenga, near the town of Iringa.