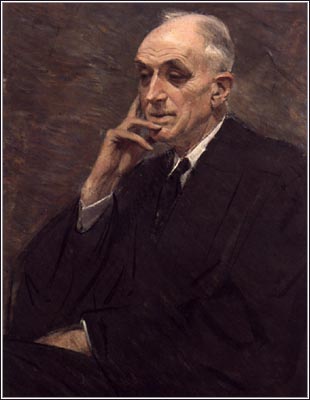 Harlan is often characterized as a member of the conservative wing of the Warren Court. He advocated a limited role for the judiciary, remarking that the Supreme Court should not be considered "a general haven for reform movements." In general, Harlan adhered more closely to precedent, and was more reluctant to overturn legislation, than many of his colleagues on the Court. He strongly disagreed with the doctrine of incorporation, which held that the guarantees of the federal Bill of Rights were applicable at the state level. At the same time, he advocated a broad interpretation of the Fourteenth Amendment's Due Process Clause, arguing that it protected a wide range of rights not expressly mentioned in the . Harlan is sometimes called the "great dissenter" of the Warren Court, and is often regarded as one of the most influential Supreme Court justices in the twentieth century.

In his younger years, Harlan attended .

In 1937, Harlan was one of five founders of the controversial , a group associated with advocacy. In private practice, he handled a variety of notable cases. In 1940, for example, he represented the New York Board of Higher Education in its unsuccessful effort to retain on the faculty of the ; Russell was declared "morally unfit" to teach.

During , Harlan volunteered for military duty, serving as a colonel in the United States Army Air Force from 1943 to 1945. He was the chief of the Section of the Eighth Air Force in England.

On January 13, 1954, nominated Harlan to the , to fill a vacancy created by the death of Judge . He was confirmed by the on February 9, and took office on February 10.

Harlan's nomination came shortly after the Supreme Court handed down its landmark decision in "",

On the Supreme Court, Harlan often voted alongside Justice .

Harlan's jurisprudence is often characterized as conservative. He held precedent to be of great importance, adhering to the principle of "" more closely than many of his Supreme Court colleagues.

Harlan believed that most problems should be solved by the political process, and that the judiciary should play only a limited role. In his dissent to "",

These decisions give support to a current mistaken view of the Constitution and the constitutional function of this court. This view, in short, is that every major social ill in this country can find its cure in some constitutional principle and that this court should take the lead in promoting reform when other branches of government fail to act. The Constitution is not a panacea for every blot upon the public welfare nor should this court, ordained as a judicial body, be thought of as a general haven of reform movements.

The Supreme Court decided several important civil rights cases during the first years of Harlan's career. In these cases, Harlan regularly sided with the &mdash;similar to his grandfather, the only dissenting justice in the infamous case.

He voted with the majority in "",

Justice Harlan advocated a broad interpretation of the Fourteenth Amendment's Due Process Clause. He subscribed to the doctrine that the clause not only provided procedural guarantees, but also protected a wide range of fundamental rights, including those that were not specifically mentioned in the text of the Constitution.

Harlan set forth his interpretation in an often cited dissenting opinion to "",

The same law was challenged again in "".

Harlan's interpretation of the Due Process Clause attracted the criticism of Justice Black, who rejected the idea that the Clause included a "substantive" component, considering this interpretation unjustifiably broad and historically unsound. The Supreme Court has sided with Harlan, and has continued to apply the doctrine of substantive due process in a wide variety of cases.

Instead, Justice Harlan believed that the Fourteenth Amendment's due process clause only protected "fundamental" rights. Thus, if a guarantee of the Bill of Rights was "fundamental" or "implicit in the concept of ordered liberty," Harlan agreed that it applied to the states as well as the federal government.

Harlan's approach was largely similar to that of Justices and .

Justice Harlan concurred in many of the Warren Court's landmark decisions relating to the . For instance, he voted in favor of the Court's ruling that the states could not use religious tests as qualifications for public office in "".

In many cases, Harlan took a fairly broad view of First Amendment rights such as the freedom of speech and of the press, but felt that the guarantees of the First Amendment applied more stringently to the federal government than the states because of the federalism principle he believed implicit in the Constitution.

The danger is perhaps not great if the people of one State, through their legislature, decide that "" goes so far beyond the acceptable standards of candor that it will be deemed offensive and non-sellable, for the State next door is still free to make its own choice. At least we do not have one uniform standard. But the dangers to free thought and expression are truly great if the Federal Government imposes a blanket ban over the Nation on such a book. [...] The fact that the people of one State cannot read some of the works of seems to me, if not wise or desirable, at least acceptable. But that no person in the United States should be allowed to do so seems to me to be intolerable, and violative of both the letter and spirit of the First Amendment.

Justice Harlan is credited for the establishing that the First Amendement protects the freedom of association.

During the 1960s the Warren Court made a series of rulings expanding the rights of criminal s. In some instances, Justice Harlan concurred in the result; "",

Most notably, Harlan dissented from Supreme Court rulings restricting techniques used by law enforcement officers. For example, he dissented from the Court's holding in "",

Harlan wrote the majority opinion ""&mdash;a case that declared unconstitutional based on the Fifth Amendment protection against .

Justice Harlan rejected the theory that the Constitution enshrined the so-called "" principle, or the principle that legislative districts must be roughly equal in population. In this regard, he shared the views of Justice Felix Frankfurter, who in ""

Harlan was the sole dissenter in "",

This Court, limited in function in accordance with that premise, does not serve its high purpose when it exceeds its authority, even to satisfy justified impatience with the slow workings of the political process. For when, in the name of constitutional interpretation, the Court adds something to the Constitution that was deliberately excluded from it, the Court, in reality, substitutes its view of what should be so for the amending process.

John M. Harlan's health began to deteriorate towards the end of his career. His eyesight began to fail during the late 1960s.

Harlan's extensive professional and Supreme Court papers were donated to , where they are housed at the Seely G. Mudd Manuscript Library and open to research.