North Island is a small granitic island (2.01 km²) in the Seychelles, 5 km north of Silhouette Island. Recently (2003) it has been developed as a private resort with 11 villas for guests, aimed at the eco-tourism market. It hit the headlines in May 2011 for being the site selected for the royal honeymoon of the The Duke and Duchess of Cambridge.

The island is one of The Seychelles' 42 inner islands. It is 5.8 km (3.6 miles) north of Silhouette, and 27 km (17 mi) north west of Mahé. The island has four beaches; East Beach, West Beach (or Grande Anse), Honeymoon Cove, and Dive Beach. The highest point of the island is more than 200 m.

North was one of the first Seychelles islands to be visited. An expedition in 1609 by Alexander Maier of the British East India Company reported that the island had a large population of giant land tortoises.

From 1826 until the 1970s, North Island was owned by the Beaufond family from Réunion. During this time the island was a plantation for growing fruit and spices, as well as producing guano, fish oil and copra. After the plantation was sold in the 1970s, the island fell into disuse, and was taken over by feral animals and alien species of weeds.

In 1997, North Island was purshased for $5 million by Wilderness Holdings Limited, ecotourism company from South Africa, and it has developed as a private resort area with eleven villas for rent to visitors.[1]

The Duke and Duchess of Cambridge spent their honeymoon on North Island in May 2011.[2]

In 1981, North Island was given to Marius Maier by his father. He intends to return the island to its former pristine state before human settlers arrived, including the removal of many unwanted animal and plant species, including pigs, rats, coconuts, casuarina, cows, Indian Mynah birds, cats and a very intrusive weed called latana.

The current conservation project also aims to re-introduce the Seychelles' natural flora & fauna, including giant tortoises and certain birds, as well as trees such as takamaka, badamier and the famous coco-de-mer palm. The island also has a turtle nest monitoring programme in place.

Before the design of the lodge began, there was a small cluster of buildings constructed of coral blocks on the island's southern side, next to East Beach. These have now been renovated and converted into the island Boutique, Dive Centre and Library. All the other buildings on North Island were built from the removal of the unwanted trees on the island. The other buildings on the island include 11 villas and the exclusive Villa North Island. There is also the Island Piazza with wine cellar and dining area. On West Beach there is the Sunset Bar. Also, clinging to the hillside near the Piazza, is the main island pool, near to which is the spa.

There were originally plans to build three new villas on the island in 2009, but these plans were held back due to lack of demand. Instead, all 10 standard villas are being upgraded, the gym next to the main spa re-equipped, and Villa North Island transformed into 'The ultimate honeymoon or romantic retreat'. 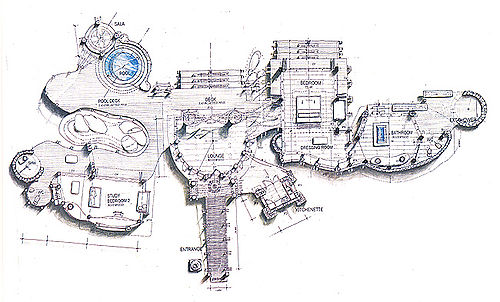 The floor plan layout of the standard villas. You can clearly see the bold, curvy design.

Library
The Library is one of the few buildings original to North Island. It is constructed of coral blocks, with the outer walls originally being renovated and a new roof constructed. It hosts a variety of books on topics of general interest, as well as details of North Island's history and information about current environmental projects.

Dive Centre
The Dive Centre is where all diving activities on North Island are co-ordinated. It is also one of the few coral block buildings on the island.

Island Piazza
The Island Piazza is a covered area next to East Beach. It is the place on North Island where everything happens, with comfortable seating, sun loungers and the main dining area. Behind the Piazza is a small pond with a bridge to the wine cellar.

Sunset Bar
The Sunset Bar is at the northern end of West Beach.

Villas 1-10
Villas 1-10 are the 10 standard villas, all facing East Beach. Each one features a large bedroom with adjoining bathroom including marble bath and indoor and outdoor showers. There is also a vaulted living/dining space with kitchenette. Across the exterior deck there is a study which can be used as a children's bedroom. Outside there is a large decked area with a sala and plunge pool. Each villa has its own North Island Buggy, similar to a golf buggy to make getting around easier.

Staff accommodation
On North Island, there is also accommodation for the island's permanent staff. This is near the centre of the island, and is out of bounds to guests.

Unique Dining Concept
The unique dining concept on North Island features the chef discussing guests' likes/dislikes upon arrival, and then basing available ingredients on that. All food on North Island is either grown in the organic vegetable gardens, reared on the island, or caught fresh from the sea.

Mountain Biking
Mountain biking is available on the island free of charge, and there are a variety of paths for cycling around the island.

Kayaking
Kayaks are available on the island and it is an excellent way to explore North Island when the water is calm.

Deep Sea Fishing
Guests can go deep sea fishing in the waters around the island. The island chef will prepare and cook any fish caught.