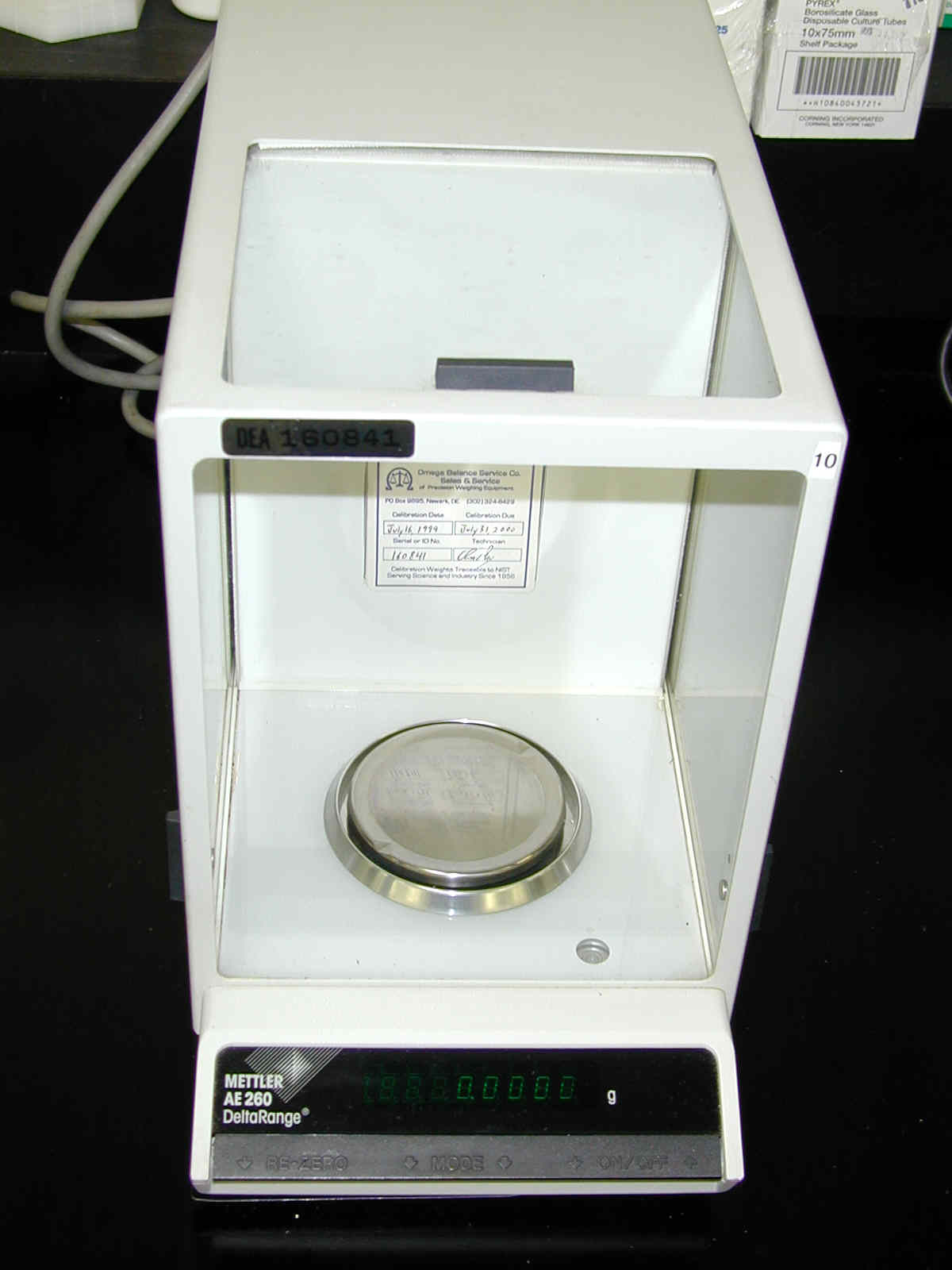 Gravimetric analysis describes a set of methods in for the quantitative determination of an analyte based on the mass of a solid. A simple example is the measurement of solids suspended in a water sample: A known volume of water is filtered, and the collected solids are weighed.

In most cases, the analyte must first be converted to a solid by precipitation with an appropriate reagent. The precipitate can then be collected by filtration, washed, dried to remove traces of moisture from the solution, and weighed. The amount of analyte in the original sample can then be calculated from the mass of the precipitate and its chemical composition.

In other cases, it may be easier to remove the analyte by . The analyte might be collected -- perhaps in a cryogenic trap or on some absorbent material such as -- and measured directly. Or, the sample can be weighed before and after it is dried; the difference between the two masses gives the mass of analyte lost. This is especially useful in determining the water content of complex materials such as foodstuffs.

#The sample is dissolved, if it is not already in solution.
#The solution may be treated to adjust the (so that the proper precipitate is formed, or to suppress the formation of other precipitates). If it is known that species are present which interfere (by also forming precipitates under the same conditions as the analyte), the sample might require treatment with a different reagent to remove these interferents.
#The precipitating reagent is added at a concentration that favors the formation of a "good" precipitate (see below). This may require low concentration, extensive heating (often described as "digestion"), or careful control of the pH. Digestion can help reduce the amount of .
#After the precipitate has formed and been allowed to "digest", the solution is carefully filtered. The filter is chosen to trap the precipitate; smaller particles are more difficult to filter.
#*Depending on the procedure followed, the filter might be a piece of ashless in a fluted , or a filter . Filter paper is convenient because it does not typically require cleaning before use; however, filter paper can be chemically attacked by some solutions (such as concentrated acid or base), and may tear during the filtration of large volumes of solution.
#*The alternative is a crucible whose bottom is made of some porous material, such as sintered glass, porcelain or sometimes metal. These are chemically inert and mechanically stable, even at elevated temperatures. However, they must be carefully cleaned to minimize contamination or (cross-contamination). Crucibles are often used with a mat of glass or fibers to trap small particles.
#*After the solution has been filtered, it should be tested to make sure that the analyte has been completely precipitated. This is easily done by adding a few drops of the precipitating reagent; if a precipitate is observed, the precipitation is incomplete.
#After filtration, the precipitate -- including the filter paper or crucible -- is heated. This achieves three purposes:
#*The remaining moisture is removed (drying).
#*Secondly, the precipitate is converted to a more chemically stable form. For instance, calcium ion might be precipitated using oxalate ion, to produce calcium oxalate (CaC2O4); it might then be heated to convert it into the oxide (CaO). It is vital that the of the weighed precipitate be known, and that the precipitate be pure; if two forms are present, the results will be inaccurate.
#*The precipitate cannot be weighed with the necessary accuracy in place on the filter paper; nor can the precipitate be completely removed from the filter paper in order to weigh it. The precipitate can be carefully heated in a crucible until the filter paper has burned away; this leaves only the precipitate. (As the name suggests, "ashless" paper is used so that the precipitate is not contaminated with ash.)
#After the precipitate is allowed to cool (preferably in a to keep it from absorbing moisture), it is weighed (in the crucible). The mass of the crucible is subtracted from the combined mass, giving the mass of the precipitated analyte. Since the composition of the precipitate is known, it is simple to calculate the mass of analyte in the original sample.

A chunk of ore is treated with concentrated nitric acid and potassium chlorate to convert all of the sulfur to sulfate (SO42-). The nitrate and chlorate are removed by treating the solution with concentrated HCl. The sulfate is precipitated with barium (Ba2+) and weighed as BaSO4.

Gravimetric analysis, if methods are followed carefully, provides for exceedingly precise analysis. In fact, gravimetric analysis was used to determine the atomic masses of many elements to six figure accuracy. Gravimetry provides very little room for instrumental error and does not require a series of standards for calculation of an unknown. Methods also do not require often expensive equipment. Gravimetric analysis, due to its high degree of accuracy, when performed correctly, can also be used to calibrate other instruments in lieu of reference standards.

Gravimetric analysis usually only provides for the analysis of a single element, or a limited group of elements, at a time. Comparing modern dynamic flash combustion coupled with gas chromatography with traditional combustion analysis will show that the former is both faster and allows for simultaneous determination of multiple elements while traditional determination allowed only for the determination of carbon and hydrogen. Methods are often convoluted and a slight mis-step in a procedure can often mean disaster for the analysis (colloid formation in precipitation gravimetry, for example). Compare this with hardy methods such as spectrophotometry and one will find that analysis by these methods is much more efficient.