Mols
This article is about the peninsula in Denmark. For the Mols settlement near Quarten, Switzerland, see Quarten. For the Dutch footballer, see Michael Mols. For Mutually Orthogonal Latin Squares, see Graeco-Latin square. 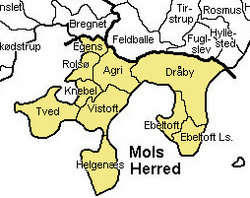 Mol's largest town is Ebeltoft a town on the coast. Some residents of Mols or Ebeltoft[who?] will argue that Ebeltoft is not a town of Mols. The usually accepted[by whom?] compromise is that Ebeltoft is the market town of Mols, although not geographically situated in present-day Mols.[citation needed]

Hills in Mols rise to 137 metres, high by Danish standards. The highest points are Agri Bavnehøj (137 m), Trehøje (127 m) and Stabelhøjene (135 m & 133 m). In 2008 this hilly area, Mols Bjerge (bjerge translates to "mountains"), was declared one of the first Danish national parks. It has unspoiled country, farms, rolling hills that descend to the sea, and very few large resorts.[citation needed]

People of Mols are called Molboer, and are noted for their Molbohistorier - ethnic stories that townsfolk of Aarhus and Ebeltoft told to ridicule rural people. Three of the better known stories are: The Stork in the Corn, The Thirsty Tree, and Black Pudding.[citation needed]