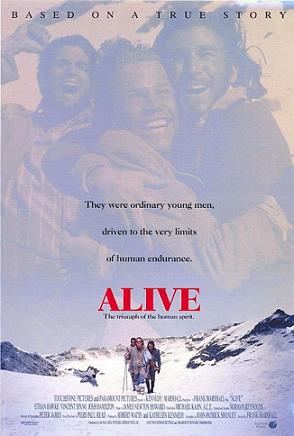 "Alive" is a 1993 film by the husband and wife team, director Frank Marshall and producer Kathleen Kennedy. It is based upon 's acclaimed 1974 book, "" (which itself was based upon interviews with survivors of the crash of on October 13, 1972).

One of the survivors, , (portrayed by in the film) served as the technical advisor to the film. "Alive" is narrated by .

16 out of the 45 passengers survived. The film includes some additional fictional incidents to add action to the story. Actual survivor Nando Parrado was on hand during much of the filming as technical advisor. Nando's mother died instantly from the crash and his sister died in his arms after being on the mountain for nine days.

The film tells the story of a an Rugby team (who were alumni of and their friends and family who were involved in the airplane crash of which crashed into the on , .

The film received mixed reviews. Some focused their criticism on the physical characteristics of the cast, arguing that it should have been chosen mainly from actors of an ancestries (i.e. Spanish and Italian, according to the demographic composition of Uruguay), instead of an. David Ansen said that, while, "Piers Paul Read's acclaimed book ... paid special attention to the social structure that evolved among the group ... Marshall ... downplays the fascinating sociological details—and the ambiguities of character—in favor of action, heroism and a vague religiosity that's sprinkled over the story like powdered sugar." [Ansen, David. "Alive." "" (January 18, 1993), 59.]

Others, such as Ray Green, praised the tactful nature of the film stating that, "despite the potential for lurid sensationalism, Marshall manages to keep his and the film's dignity by steering an effectively downbeat course through some grim goings on thanks in no small manner to the almost allegorical ring of Shanley's stylized dialogue." [Green, Ray. "Alive." "Box Office" (March 1993).] Green continues by describing the film as, "thrilling and engrossing as it is at times, "Alive" is more than an action film—in its own way it is also a drama of ideas, and of the human spirit as well."

wrote "There are some stories you simply can't tell. The story of the Andes survivors may be one of them."

A companion documentary, "", was released at the same time as the film. It includes interviews with the survivors, as well as documentary footage of the rescue. The 30th Anniversary Edition of "Alive: The Miracle of the Andes" (on DVD) includes this documentary in the "Extras" section.